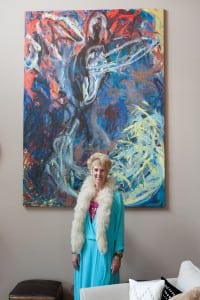 In her presentation, multimedia artist Drummond, of Garrison, will talk about some of her painting expeditions to beautiful and sacred places around the world and her response in paint. She will share images from her travels and the influence of nature on her work. From the juxtaposition of photographs of beautiful places and her resultant paintings, viewers can glimpse the creative process at work and connect the dots between Drummond’s inspiration and experience and her creations. Her presentation will conclude with a 5-minute art video filmed during a recent painting expedition in Costa Rica.

Raised on the shores of the Mediterranean in North Africa, Drummond paints and films with the colors of light, versus pigment. Her childhood environment imprinted her with an awareness of and appreciation for the fusion of opposites, such as sunlight and shadow; prehistoric, colonial and modern architecture next to shanty towns; and organic wave patterns in sea and sand dunes.

Curious to find out what influence disparate environments would have on her work, Drummond embarked on painting expeditions to diverse natural and sacred places around the world — including the Galapagos Islands; Uluru in Australia; Delphi and Knossos in Greece; Anatolia in Turkey; and Borobudur in Java. Due to her expeditions and subsequent art exhibitions, she was selected to become a member of the Society of Women Geographers. Her recent expeditions include the West Indies and Costa Rica.

In his presentation, mixed-media artist Thomas Huber, of Cold Spring, will talk about the shattered pictorial plane in contemporary, abstract art and the rejection of Renaissance perspective — and how his work pursues these ideas. Huber will contextualize his work with that of such painters as Cy Twombly, Sigmar Polke and Jean Michel Basquiat. In Huber’s work, he has many marks, writings and images that can be isolated by the viewer but ultimately come together in a single work. The landscape is sometimes implied but it is spatially ambiguous and hard to tell what is forward and what is in the background. There is no perspective space.

Huber grew up in Buffalo. He moved to New York to attend The School of Visual Arts, where he stayed after graduating in 1986. He began working with performance artists Gayle Tufts, Yoshiko Chuma, and the House-O-Pork and performed in several bands through the ’90s at such venues as PS122, La Mama, Hallwalls, Jacob’s Pillow and King Tut’s Wah Wah Hut. 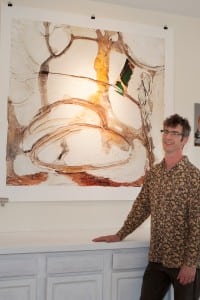 He continued to make paintings, and these increasingly became his focus. He began showing his work in the late ’90s in New York City and was represented by Pacifico Fine Arts from 1999 to 2002. In 2000 he moved to the Hudson Valley and eventually began showing in Beacon and around the Hudson Valley, particularly at Beacon’s now defunct Van Brunt Gallery. His work has been shown throughout the United States as well as in Montreal and Naples, Italy.

Huber’s work is also showing at the Edward Hopper House in Nyack in a show entitled CURRENTS – Abstract Painting in the Hudson Valley, which runs through Aug. 26.

For a feature-length story on Thomas Huber, which appeared in Philipstown.info last year, click here.

Also at ArtFull home, Director Barbara Galazzo and her special guest speaker, designer/curator Lithgow Osborn, will host a lecture lunch on Tuesday, Aug. 7. Osborn will be speaking on the subject of Creating a Collection of Art. Notes for the talk describe creating a collection as seemingly daunting to most people, but, “in fact if you look around your home and really begin to look and analyze your belongings, you’ll see that you already have a ‘collection.’ You may not look at it that way, but every time you purchase any non-essential, decorative object you are building your collection. The trick to creating a collection is focus and quality.”

Osborne is a native New Yorker, who received his undergraduate degree at Sarah Lawrence and studied at the New York School for Interior Design. In addition to being a decorator, collector and curator, he was a partner in one the first galleries to be established in Chelsea, which quickly became a mecca for modern art. Closing his firm in 2002, he moved from Manhattan to Putnam County. He recently ended a stint as the manager at Malmaison, a high-end, mid-century French antiques business in Manhattan.

The cost for the lecture lunch, which also includes a tour, is $40.

The ArtFull Living Designer Show House is a unique collaboration between designers and artists sponsored by Cold Spring Arts, Garrison Art Center and Glassbury Court. All items are for sale with profits going to the Born this Way Foundation.