Hudson estuary is a nursery for spawning species

Hundreds of thousands of blueback herring born in June, probably in the Mohawk River, make their way down the Hudson to the ocean and then return four years later as adults to spawn themselves.

The Hudson in summer is the season of teeming new life. Fresh and saltwater fish species, spawned by parents amidst the refuge of the estuary system we call a river, begin what is for many an arduous and adventurous existence. Hugging the river’s shoreline or the banks of brooks, marshes or streams, over 200 different species seek survival and renewal through increased numbers.

Summer is when young fish learn to swim amidst the uncertain tides, to search for food and to evade and hide from predators. For many the river or its tributaries become home. For others, the journey downstream as the season cools prepares them for a turbulent life among the wild Atlantic waves.

Counting the fish within the estuary system would seem a daunting task especially when new millions have emerged from the eggs of spring. Even a disinterested observer could surmise that a census would involve a large measure of inexactitude. Not surprising then the announcement of the Great Hudson Fish Count met with some reportorial skepticism.

Of interest, however, was the opportunity to meet with Tom Lake, a naturalist with the New York State Department of Environmental Conservation Hudson River Estuary Program. The program’s mission is to work with local communities on projects to protect and improve the river as well as the surrounding land and the connected waterways.

The keynote speaker at a spring fishing conference at the Franklin D. Roosevelt Presidential Library and Museum in Hyde Park, Lake knows a great deal about the river and its aquatic eco-system and he loves sharing his knowledge.  As part of the Saturday, July 21 event (also known as Hudson River Day) he chose the sandy beach at Little Stony Point just north of the Cold Spring Village line for some seine net casting.

Lake cheerfully admitted that he wouldn’t be actually counting fish so much as sampling the catch found in his net after conducting a methodical dredging of the shallows along the shoreline. “The intention is not really about counting fish as it is drawing attention to the river and the life of the fish,” he said. 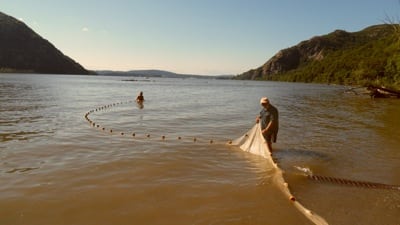 Pleased to have both a reporter’s attention and a second pair of hands for net and bucket lugging, Lake explained that the spawning ​season is an important time to check on the presence of new fish life ​as a barometer of the river’s health.

“We know the fish in the river and we have a good idea of the spawning areas and the conditions they prefer. For the different fish it’s all about salinity, temperature and tide.  What we find in the net will help diagnose how the river is doing,” he said. Using an extreme contrast for illustration, he pointed out that if at every location no fish were found in the nets “we’d know the river is in peril.”

Lake said the spot fish was the find of the day as it is rare to see them so far upriver indicating there was a measure of salt in the water. The spot is also known as the Lafayette, named for the famous French aristocrat, Marquis de Lafayette, who was instrumental in providing French aid to the American revolution and served as a general in the war.  In 1824 the Marquis, on a grand tour of the U.S., visited New York where he received a parade, and had streets and schools named after him along with the very abundant spot fish.

Lake observed that this particular area of the river had vegetation (a natural host for young fish) washed away during the tidal surges of Hurricane Irene last year, as did many others, so he was pleased with the catch.

“The major role the Hudson plays is as a nursery,” said Lake underscoring the point for the 30 species that eventually return to the ocean, shad, herring, bass and bluefish among them. “The young fish need a relatively soft environment for six to eight months to acclimate. If they were put out in the ocean as very small fish they would not last very long.”

One species not found on Saturday was sturgeon, which Lake has described as the iconic fish of the Hudson given its potential for great size and its distinctive look. Unfortunately this ocean traveling fish, which is sometimes caught in size in the river has been fished too frequently, reducing the population of mature sturgeon. In April of this year it was placed on the endangered species list.

Keeping tabs on species, monitoring for the presence of new ones that might travel on ship hulls or through other waterways and cause havoc with native species, is all part of the effort represented by Lake’s investigation this day. Overall he found the effort encouraging ​and reason for optimism. “It was very satisfying.”