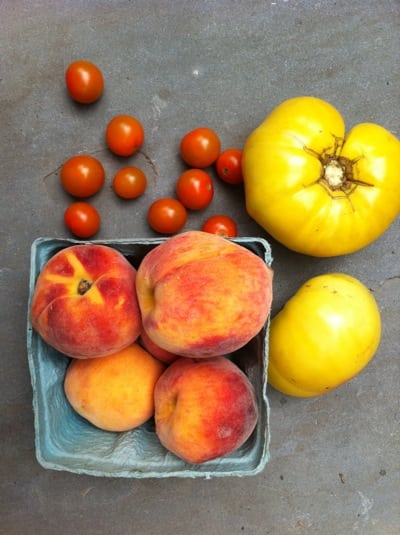 Tomatoes and peaches, those ravishing Brigitte Bardots of the farmer’s market, have arrived, causing a bit of a buzz. But despite their seasonal concurrence, they do not often co-star at the table, which is a shame, because they actually pair quite beautifully — the bright, ripe acidity of one offsetting the dreamy-luscious perfume of the other. I might never have been initiated into this secret but for the fact that I was lucky enough to be working for Martha Stewart Living in the 1990s, at a time when the test kitchen was manned by culinary superstars.

One perquisite of working at a magazine with a test kitchen was that every day, starting around 2 p.m., piles of food would begin to emerge, and we were all invited to help ourselves. This quickly became a hardship. If you weren’t in the mood for, say, lobster rolls with homemade tarragon mayonnaise, you merely had to sit tight, because 20 minutes later out would come a raspberry ice cream bombe followed by a potato and black olive torta, and a batch of smoked pork tacos. Even on those rare days when your resistance was strong and and you could walk right past the first six dishes to appear, inevitably the seventh would break you, banishing your willpower to a corner where it cowered, waving a white flag, as you scooped gobs of dark chocolate pot de crème into a paper coffee cup.

Harder still was that I was the magazine’s primary food writer, and as such, I often was required to sample various recipes as part of my research. My metabolism did not differentiate between a calorie consumed for research and one consumed recreationally, and I spent far too many after-work hours at the boring, smelly gym trying to atone. 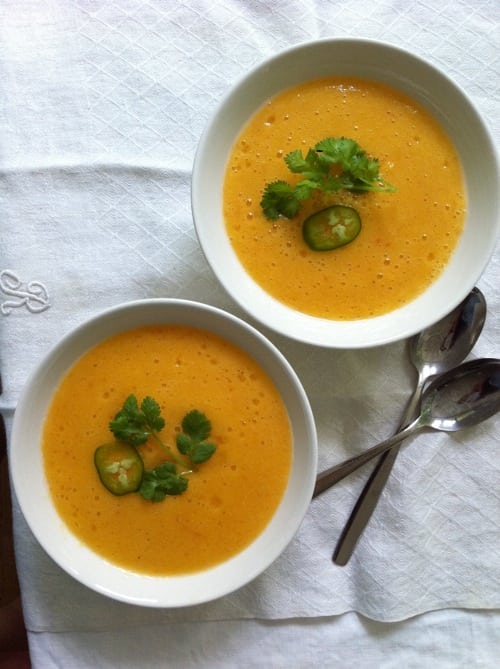 But there was an upside to all this eating: I tasted dishes that I would never have been inspired to make if I’d merely stumbled across a picture and a recipe in a magazine. Minted Peach and Tomato Salad was one such revelation. The thought of it left me cold. But the taste rocked my world.

Being the ′90s, the salad was made with balsamic vinegar, which, despite being passé, remains as good a choice now as it was then. There was also a splash of lemon juice, and a scattering of mint leaves. The dish also, surprisingly, contained very thin slices of celery, which contributed fragrant, fresh-peppery celery-ness, as well as welcome crispness. The salad is easy enough to throw together in a few minutes, adding olive oil, salt and pepper.

And I still do once a summer. But these days, I crave cold soups when the days are hot, and I’ve turned my favorite mid-summer salad from the 1990s into a pureed soup for the 2010s, sometimes adding a bit of jalapeño for excitement, and varying the herbs according to what’s on hand. I like to keep some in the refrigerator. And since I am no longer in my 20s, my metabolism enjoys it almost as much as my taste buds do.

version A:
3-4 slices jalapeño, or to taste
¼ cup cilantro leaves

Place the first seven ingredients in a blender; add the ingredients from either version A or B. Puree until smooth. Strain through a sieve, if desired. (If you’re serving the soup to company, this step is worthwhile.) Chill very well before serving. If you want to be fancy, garnish the soup with a few leaves of whichever herb you used, plus a very thin slice of jalapeño, if desired.