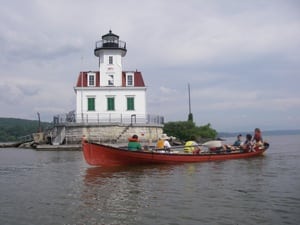 A mix of old sea salts and novices, a gang of 12 took off from just south of Saugerties on July 23 for what promised to be a well-oiled machine of a journey down the Hudson. Oars in the water, the rowers embarked in two large boats, each with an experienced captain, anticipating a rerun of identical four-day, three-night river rowing and camping expeditions run by Building Bridges Building Boats (BBBB) over the past few years.

In that way she does more and more these days, Mother Nature threw them all a curve, and then a few more, giving these Huck Finns a taste of epic adventure before the short trip drew to a close.

Perhaps the soaking rains the first night out were a clue of what was in store, as “it came down like crazy,” according to one of the captains, David Sternau, a Cornell sophomore who has done this trip and others not quite like it, multiple times. “I’ve done this exact trip before,” he said, “and it rained every single day, but we rarely had to get off the water because we just go right through the rain, but this time….”

At Kingston, sidelined by the weather, the group handily got a tour of the Hudson River Maritime Museum and continued to Margaret Norrie State Park for camping overnight. Near Norrie the rowers encountered an empty island (owned by the state), steep and hard to land on, but they did. Stepping out into the deep mud, they had to carry their water shoes to the shore, or the heaviness of the gear would make them stuck. 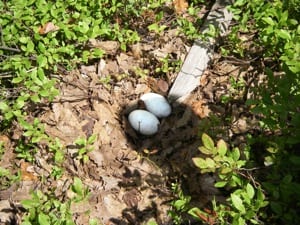 On the island, amidst the brush, the boys spotted two “gigantic – I mean these were seriously big” eggs, from an unknown (to them) species, according to David Hardy, BBBB director and captain of the second boat. In addition to the Jurassic mystery eggs, they also discovered an inscription on a rock dating from 1958.

Though the State Park’s website describes it as a “serene, wooded area,” a cloudburst brought a deluge that soaked every bit of everything. Still, the intrepid boatmen arose the next morning up and at ‘em for more river stuff. (Yes, all were male, with the exception of one of two “land crew” members who traveled the route on land, setting up and cooking for the gang at each stop.)

The day began with clouds and the somewhat encouraging forecast of scattered showers, with some “major-league weather stuff,” not predicted to arrive until the afternoon, recalled Hardy. Raincoats on and a little groggy, they took off, but got just to a point south of the Mid-Hudson Bridge before getting slammed by a “big-time storm,” said Hardy. Luckily, they were able to get the boats to Shadows Marina — all this before 8 a.m.

Huddled underneath a bridge by a highway, they waited the storm out, taking requisite amount of time for the thunder ​to quit. With the continued threat of unstable weather, they tried to “puddle jump — scoping out every mile, avoiding exposure,” said Hardy, who added that finding a spot to pull the boats off the river can be tricky, as train tracks line both sides.

The fits-and-starts method worked, and they finally pulled into Chelsea Yacht Club just before noon. At Chelsea (which is north of Beacon), they heard the storm warnings get more and more hysterical, with “take shelter now, extreme alert” advice coming through on the marine radio every few minutes. 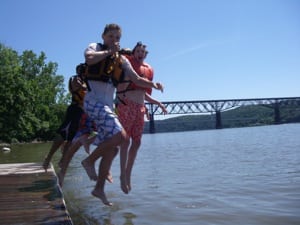 Jumping into the river (photo by David Hardy)

Later in the day, after the kids set up the tents and had dinner, “You could see the stuff coming in,” said Hardy. “There was a dramatic deep blue sky which got darker and darker. We got all the kids inside and then that thing just tore through — winds were 45 miles an hour and ripped our tents up. There was no power at the Yacht Club.”

Asked if the kids were terrified, Hardy replied, “No! It was exciting for them! We even had one kid who had never camped outdoors before, and he loved it!”

The following morning the group made it back intact to Cold Spring, without further ado. “The kids were magnificent in the rowing,” said Hardy. Asked if he thought the trials of this journey might dampen the spirits, so to speak, of the campers in terms of returning next year, Hardy expressed surprise. “Oh no — most of them have already said they want to do it again. It’s different when they’re out there seeing the river and the point of view of the river. This trip felt like it had some danger to it; not much, but it put an edge to the day.”

Sternau added, “In hindsight, after you let it sink in, you realize you accomplished something going down the Hudson in wooden boats.”

Perhaps this year’s rowers will be just a tad disappointed if future trips bring them nothing but mild, summery dry skies….

River camp was back in action this week, the final session of this year’s program.  Community rowing, departing from Dockside, should be back up and running soon, and everyone is invited to participate. For more information on both the Summer River Workshop programs and community rowing, email David Hardy at [email protected]