Trailed by a few members of the public, the new inter-board Butterfield Project Committee got down to business Monday (Aug. 6) with a one-hour walk around the former hospital grounds before conferring in the Cold Spring Village Hall for another 90 minutes.

In May, Guillaro had withdrawn previous plans and put the project on hold temporarily. On Monday, he joined the new committee in its activities. 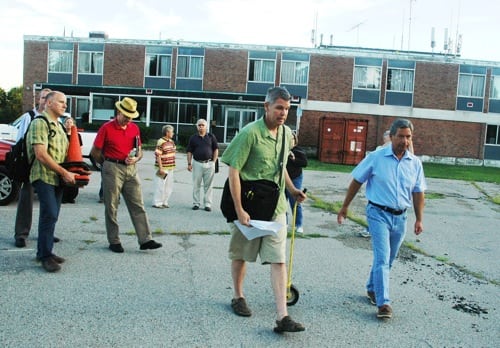 Led by Mayor Seth Gallagher, rolling a measuring wheel, the committee members began by viewing the intended locations of the three stand-alone residences on Paulding Avenue, four market-rate condominiums for retirement-aged buyers, an inter-governmental municipal building and post office, and a cluster of commercial offices and shops. Guillaro, of Butterfield Realty LLC, the property’s owner, participated in the tour. On the lawn, the large copper beech tree stood oblivious of the changes that could soon alter its surroundings.

Back in the village meeting room, the mayor outlined the charge for the new committee, which consists of two members each of the Historic District Review Board, Planning Board, and Village Board (including Gallagher). According to Gallagher, the panel is “here to find solutions to problems and avoid delays in action” in reviewing Guillaro’s plans. “Each of these boards is going to have a say in approving this project.”

As an ad hoc committee, the inter-board group “can’t make any binding decisions by ourselves,” Gallagher said, but must scrutinize the project details, raise and try to deal with problems, reach a basic understanding before reporting back to the respective constituent boards, and “cut out a lot of the back and forth” that would ensue if each board took up issues separately with Guillaro.

As they had a week earlier when Guillaro unveiled his new plans, several issues cropped up almost immediately Monday, including the destruction of the old hospital, heights of the new buildings, the number of condos, and parking.

HDRB Chairman Al Zgolinski zeroed in on the intended demolition. On that score, “the only thing to resolve is the status of the existing building,” he said, adding that the HDRB has considered insisting that at least the original 1925 section be preserved. The entire structure is an amalgamation of the 1925 core and the architecturally divergent 1940s and 1963 additions.

“It’s not feasible” to save the 1925 portion, Guillaro said. “The numbers would be astronomical.”

Zgolinski then suggested that “restoring the ’63 addition would probably be cheaper. It’s historic. Historic does not necessarily mean pretty.” He explained that the 1963 addition had been donated by a local doctor, with additional funds raised by the community. He suggested that if it comes down to saving the hospital or retaining the currently used Lahey Pavilion of medical offices, the old hospital should be favored, with the Lahey doctors moved to new quarters. 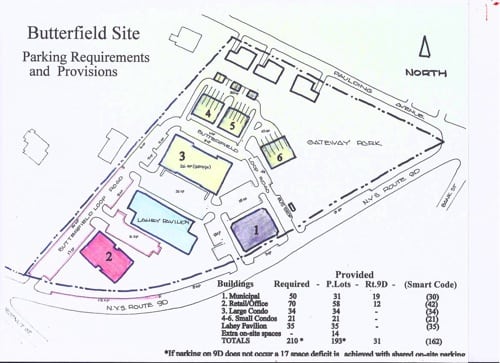 “I’m against the demolition of the Lahey Pavilion,” Gallagher announced. As for the old hospital, “What’s the history you’re saving? You have to have rational criteria [to save it], and that’s not what I’m hearing. There’s no reason to preserve any of it.”

Guillaro pointed out that a 49-year lease prevents the closure of the Lahey Pavilion.

Planning Board Chairman Joe Barbaro focused on the number of condos — 55 spread among four ​buildings — and heights. “I’d like to see Mr. Guillaro make money … but by having as few units as possible and still make money,” he said.

Guillaro noted that he had already reduced the number of housing units from the 87 shown in his earlier, scrapped concept.

Barbaro similarly voiced uncertainty about one condo building expected to be three and a half stories, at least when viewed from one side. Guillaro responded that the height matches that of the townhouse complex he built at the Cold Spring waterfront and the top “is not going to be any higher than it is now” at the old hospital.

The elegant copper beech also drew Barbaro’s attention. “That tree is one of our treasures,” he said.

Guillaro suggested that the lot for the single-family home nearest the tree could be reduced to provide more of a buffer. Gallagher proposed an easement for the beech, adding that “the tree is going to be saved, one way or another.”

Gallagher responded that along its length, Paulding Avenue has varied lot sizes and that Guillaro’s planned lots “are not uncharacteristic of the village” as a whole.

Zgolinski termed the village’s present mandate on parking “a problem. It’s a suburban model. It doesn’t make sense for the village.”

The mayor observed that the waiver system that allows Main Street businesses to pay a fee in lieu of providing parking could be extended to Butterfield. As an alternative, “we can also adopt the smart code” to replace the existing law, he said.

The following evening, at the Village Board workshop Gallagher reported that the inter-board work “went well. Hopefully, we’ll be able to move it a little bit forward every time.”

“Definitely the Planning Board seemed a lot happier” with the latest design, added Trustee Matt Francisco, the Village Board’s other representative to the Butterfield Project Committee.

The committee scheduled its next session for Wednesday, Aug. 22.