An aide from Sen. Charles Schumer’s office came to a Philipstown Town Board workshop Wednesday evening (Aug. 8) and got an earful: The town needs more than $1.2 million in FEMA funding – and soon – to beat a federal deadline and finish repairing roads damaged in last year’s hirricane. 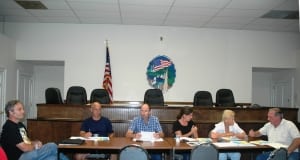 Chirico said that as the town’s applications for money have wound their way through FEMA, the agency has assigned four consecutive project specialsts to the case, which “in itself holds up the process.” With each new FEMA specialist, “the process then begins all over again … site visits, estimates,  etc.; all this can be very time consuming,” Chirico said in a memo distributed at the workshop. “We have eight projects still being reviewed for one reason or another. The cost … is $1,263,445.51.”

He explained that FEMA describes the hold-ups as mostly routine, given the number of claims submitted by municipalities in southeastern New York. However, he warned,  the town’s damaged roads “have to be repaired and [work] completed by a certain date, which in our case is March 8, 2013,” because the clock started ticking last fall when the town went to its kick-off meeting with FEMA. Moreover, he said, “roads will need to be closed for some projects. And with school starting very soon, time is a concern.” Meanwhile, crews have already been busy on some projects, he told Peluso, and “I get a little bit nervous when I put these jobs out for bid.”

Shea said the town had pushed ahead to fulfill its obligations in the submission process and all the rest. “We’re doing the work in the good faith that we’re going to get funded.”

Peluso said the issue “is very important to the senator,” who had already conferred in Washington with FEMA Administrator W. Craig Fugate about FEMA problems in New York State.

“It’s our job to cut through the red tape and that’s what we’re going to do,” Peluso assured the board. “If it were up to us, you guys would have gotten the money a long time ago. I expect an answer from FEMA any time,” such as the end of this week or middle of next week,  “and hopefully you’ll start getting some money soon,” at least a partial installment, he said. Peluso also suggested the March 2013 deadline might be extended, as it apparently has been for other municipalities. “I don’t think anyone would say you should meet this deadline … if FEMA was the one holding it up.”

One thought on “Town Presses FEMA for More Than $1.2 Million”