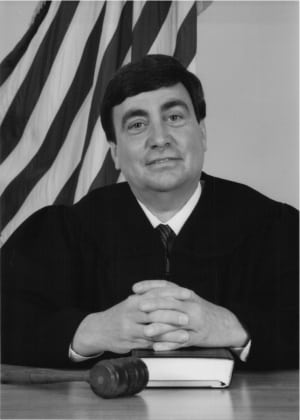 Judge Thomas Scuccimarra of Garrison was sworn in as an officer of the White Plains Bar Association on June 20, 2012. He served as a director of the association for the past several years and was elected to the position of secretary.

The White Plains Bar Association celebrated its 65th anniversary this year, having been founded in 1947. The membership numbers over 250 and consists of local lawyers, members of large law firms, and state, county and local court judges.

In March of 2000, he was appointed by Gov. George Pataki to a vacancy in the Putnam County Court in Carmel, where he served as a “multi-hat” judge presiding over Criminal, Family and Surrogate Court matters. In May 2001, he was appointed by Gov. Pataki to his present position as a judge of the New York State Court of Claims in White Plains, N.Y. That district covers cases out of Putnam, Rockland, Westchester and Orange Counties.

Judge Scuccimarra presently serves on the Ninth Judicial District’s Committee to Promote Gender Fairness in the Courts. In the past he served as president of the Putnam County Magistrates Association and the Peekskill Bar Association. He was one of the original members of the Town of Philipstown’s Conservative Advisory Council and served on the boards of the Butterfield Hospital and the Cold Spring Chamber of Commerce.

He engaged in the general practice of law in the local area for many years before assuming his present position as a full-time judge. He resides with his wife, Barbara Scuccimarra, in Garrison.