Every August, come corn season, my grandmother would dust off the same old story. She was long past caring that we’d heard it dozens of times before, for she had attained that age we all must someday reach when conversational risk-taking feels as hazardous as slacklining over the Grand Canyon. Thenceforth, she was content to retell the same handful of well-worn anecdotes, ones that had reliably generated chuckles (no matter how forced) over the years. 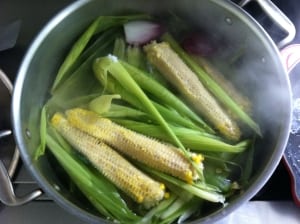 Boil the husks and cobs to make a corn broth. Photo by C. Barbour

It went like this: Once, on a visit to her formidable British in-laws, she brought some corn-on-the-cob for their cook to prepare for a picnic supper. The afternoon wore on, and as mealtime approached, the cook appeared anxiously by her side. “Pardon me, ma’am,” she said. “I’ve been boiling the corn for many hours, and the outside is lovely soft, but the inside is still quite hard!”

Although my grandmother has been dead for nearly 30 years now, her story managed to embed itself in the cogs of my memory, and every August, my own brain offers it up. It came to mind the other day as I submerged several ears in a pot of boiling water, then eyed the clock so as to cook them for roughly three minutes — about as long as it took the water to return to a boil. During this time, my son Henry wandered in and said, “Mom, remember that corn story you told us about your grandmother?” demonstrating that the tale will live on even after my own brain is jelly.

And why not? It’s charming enough. But something in it has always grated on me, perhaps because I hear faint echoes of social snobbery in it — my grandmother was keenly aware of class distinctions — and class and corn have no business showing up in the same story. Corn is as democratic a vegetable as we have. It rewards those who prefer cheap-and-easy preparations with as lavish a show of flavor as those who fuss and fret over it.

I was reminded of this last weekend, when we went to some friends’ house to swim and wound up staying for dinner. They hadn’t expected our company to be quite so unshakable, and had food enough on hand for only five people, not 10, so I ran home and got extra things to throw on the grill, including a sack of corn. The dad began shucking. “Stop it!!” I said. “Just throw it on the grill like that, husk and all.” 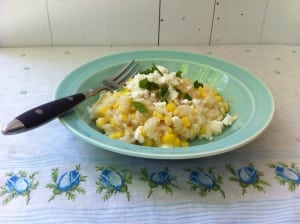 He was skeptical, but I was bossy — rock to his scissors, and I won the round. He laid the fully-clad ears on the grill, turning them as each side began to blacken, for about 10 minutes in all. Later, at the table, the husks slipped right off, as did the silk, and the corn was perfect, having steamed and turned just slightly smoky inside its excellent wrapper.

But hello? Perhaps you noticed that I just outdid my grandmother, by actually writing a story in which my good corn sense trumps another’s corn foolishness. So here’s the truth: I learned that grilling technique from my husband. When I met him, I, too, insisted on doing elaborate, unnecessary things to corn. Sometimes, when he’s not looking, I still do. Just for fun. Hence this delicious risotto, which my grandmother would have loved.

Risotto is far more forgiving than I’d once believed. You can vary the proportions of most ingredients to suit your taste — even reducing the fat to just 1 tablespoon olive oil. Just have everything ready before you begin cooking.

1. Heat the broth in a small saucepan. Add about half the corn kernels. Meanwhile, warm the butter and olive oil in a dutch oven or heavy-bottomed pot over medium-low heat. When the butter is melted, add the shallots and cook for 3 minutes, until soft and barely golden. Raise the heat to medium and add the rice. Saute it for 2-3 minutes, stirring constantly. Add the wine and cook, stirring vigorously, until it’s absorbed into the rice.

2. At this point, the broth should be simmering. Add it to the rice mixture, one ladleful at a time, stirring until it’s absorbed before adding the next. When the rice is nearly done (you’ll need to taste a couple grains — they should still be moderately hard at the center), add the rest of the corn kernels. Add one or two more ladles of broth, just until the rice is al dente and still fairly soupy. Mix in half the crumbled feta and cover the pot to let the risotto “bloom.” (Apparently, that’s what they call it in Italy — I call it time to dress the salad.)

3. Just before serving, mix in the mint. Serve at once, with the rest of the feta on the side.

Note: You can make a nice, sweet corn broth by boiling the inner husks and leftover cobs from your corn. Pile them in a pot, add some water and a halved onion, cover and let simmer for 45 minutes. Drain and keep in the refrigerator for other corn dishes.