This will be the sixth Boston-to-New York ride for Kelly Guinan-Preusser and her husband Ed Preusser. Photo by M. Turton

Kelly Guinan-Preusser, Ed Preusser and John Dunn have something in common, beyond the fact that all three happen to live in Philipstown. The first part of the connection is rather obvious, since Kelly and Ed are married to each other. But John barely knows Kelly, through her job at Grey Printing, and he doesn’t know Ed at all.

And yet, the three of them have decided to take a rather long bicycle ride together — along with about 100 other people they don’t know but with whom they also share a connection. They are participating in the annual 285-mile Braking the Cycle bike ride from Boston to New York City on Sept. 28-30, in support of Housing Works, and they’re looking for community support.

Housing Works aims to end two crises: homelessness and AIDS. It is the largest grassroots AIDS organization in the U.S. It advocates funding and legislation to ensure that those living with AIDS have access to quality housing, healthcare and HIV prevention information, as well as legal protection against discrimination.

Since 1990 it has also provided services to more than 20,000 homeless and low-income New Yorkers living with HIV/AIDS. In addition, it is breaking new ground in the social enterprise movement. Through its thrift shops, cafe and catering, it not only generates funds to support its mission but also provides jobs for its job training graduates and educates its thousands of customers about homelessness and AIDS.

Like everyone on the Boston to New York ride, Kelly, Ed and John have each pledged to raise $3,500 in support of Housing Works.

For Kelly, her involvement in Braking the Cycle carries on a tradition that was very important to her dad, John Guinan, who along with his father, Jim, operated the much-loved Guinan’s Country Store and Pub at Garrison’s Landing. “It started when my uncle Tom was HIV positive and he did the ride. Then one year my dad just said, ‘I’ll do it too,'” Kelly said.

The two brothers-in-law rode together for several years. Tom died in 2000, but John carried on riding until 2006, when he fell ill shortly after that year’s Boston to New York ride. He died in 2008. Kelly picked up the torch and has been “Braking the Cycle” ever since. Ed joined in to support her on the rides. This is the sixth year they have participated. 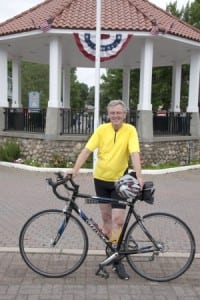 John Dunn will ride in Braking the Cycle Sept. 28-30. Photo by Jan Thacher

John Dunn has taken on the ride as a personal challenge. “A staffer at the Housing Works Bookstore Cafe who knew I was getting back into cycling challenged me to sign up,” Dunn said. “It’s a great cause — fighting HIV and AIDS — combined with a great challenge: riding ​​​​285 miles in three days at age 65.”

The three take considerably different approaches to getting in shape for the ride. Ed is unapologetic, saying, “I train very little. I did about six miles last year,” referring to his less-than-rigorous workout schedule. Kelly seems to a bit more intent on being ready for the road. “I try to do more. I try to go out every weekend,” she said.

Dunn is definitely taking preparation seriously. “I ride as often as I can, locally, in the area, up in the Catskills and on a training stand for the bike, allowing me to ‘ride’ at home,” he said. “Today I rode 65 miles by doing four round-trips on the Dutchess Rail Trail.”

Dunn, who is doing the ride for the first time, really has no benchmark. He may or may not want to talk to Ed beforehand. “You’re up before sun up and you’re pulled off (the road) at dusk,” Preusser said. “Each day you get a little stronger. But the worst part is getting up, having breakfast and getting back on the bike. Parts of your anatomy are not happy.”

Kelly doesn’t disagree but takes it in stride. “It’s intense. It’s pretty intense,” she said, “but it’s three days out of your life. People with HIV deal with a lot more every day.”

Both Ed and Kelly stress that there is a lot of help along the way. “They keep the number of riders low and the support high,” Kelly said. That support includes “oasis” stops at regular intervals, a chase van for people who really need a break and even technicians to deal with any mechanical problems the bikes encounter.

A closing ceremony is held at the end of the ride in New York City. Alcohol is not permitted during the ride, but cyclists can look forward to a cold beer just after the 285th mile.

Both Kelly and Ed said they plan to take the day off after the ride.

To make a contribution in support of Kelly, Ed or John, go to brakingthecycle.org. Click on participants, and the list of cyclists will appear. Click on John Dunn, Kelly Preusser or Ed Preusser to make a secure donation. Dunn said that some people feel that a $10 contribution is not meaningful, but he plans to round out his fundraising efforts by seeking 100 contributions of $10 each.

One thought on “Three Locals to Help ‘Brake’ the Cycle”