I ran into an acquaintance at Food Town a while back, and we got to talking about summer plans. When I told her that I was going to be cooking at a girls’ sleepaway camp in Vermont for a few weeks, she laughed and said, “Don’t you get enough cooking during the year?”

“You’d think so, right?” I replied, laughing along.

What prompted our ostensible mirth is that I cook for Garrison School’s Hot Lunch program once a month, heading up an amazingly dedicated team that prepares meals from scratch using mostly local, seasonal and organic ingredients. It’s satisfying work, to be sure, but also difficult, stressful and time-consuming.

Yet proud as I am of what our team has accomplished at GUFS, the woman’s comment rattled me. As I walked out to my car and unloaded the bags, her words bumped around in my head, stirring up worries: Why am I cooking for my summer vacation? What’s the matter with me? Am I some kind of martyr, slaving away in a kitchen while everyone else is at the beach? And so forth during the whole drive home.

But back in my kitchen, a new thought popped into my head, halting my self-ambush in its tracks: Cooking for me is not a chore, like laundry or clothes-shopping, not something I suffer through because I must, in order to get on with life. Cooking is one of the best parts of life — a simple art that nourishes people I care for.

So, for me, going off to Vermont to cook is like going to Taos to work as a ski instructor because you love to ski, or going on a shopping spree to Tokyo because you love buying clothes. I crave the experience of cooking in different kitchens, alongside different groups of people.

Off I went, feeling resolved, and the work was very hard and very fun, and it exhausted and astonished me. Many of our menus were crazy-ambitious, and, to my amazement, the kids raved about them (more about that in another column). But other times, we prepared things just to make ourselves happy. 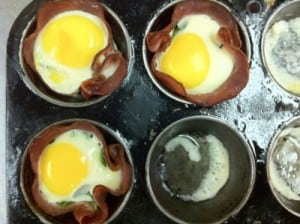 One morning, Lily, the head cook, wanted to make ham cups for breakfast. She’d seen them described in a blog, and had been thinking about them all spring. (Like me, she obsesses about cooking when not actually doing it.) You make ham cups by pressing a slice of ham into the cup of a muffin tin and then breaking an egg into it. You can sprinkle cheese on top, or lay a few leaves of spinach over the ham. However you make them, they are easy and charming — they pop out of the tins looking a bit like roses, or pink turtles — and everyone loved them.

When 180 people love what you’ve cooked, and those people are at summer camp, they sing and stomp and holler, and they call you out of the kitchen to parade through the lodge and take a bow. And honestly, who could ever get enough of that?

Preheat the oven to 375°F. Oil a muffin tin or spray with nonstick spray. Into each cup, press a slice of ham, to mimic the contours of the cup. Lay 2 spinach leaves in the bottom, if desired. Break an egg into each. Sprinkle with salt and pepper. Top with cheese. Bake until the eggs are set and the cheese melted and bubbly, about 15-20 minutes. Let cool for a couple of minutes before serving.