Lanyard-making out, scene study and improv in at HVSF pilot program

If “it is a wise father that knows his own child,” according to a certain William Shakespeare, then Chris Edwards is a wise father indeed, knowing that the best path towards helping children appreciate the Bard is not one of recitation and diction, but rather spirit and action. 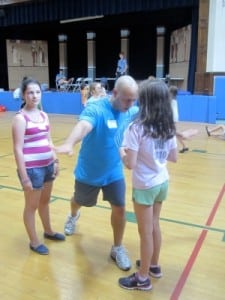 Chris Edwards works with two campers. Photo by A. Rooney

In the course of five action-packed days, 32 children going into grades 4 through 8 sampled the foundations of acting, with daily rotating sessions on acting, improvisation and voice, enhanced by more specifically Shakespeare-related master classes in stage combat,  movement, and scene work, all presented by HVSF actors and teaching artists.

The last component of each day was small-group scene study, with groups dubbed “Kings,” “Queens” and “Chamberlains” each working on a different scene. The very end of each day saw a gathering together as a whole, talking theater, learning a bit about the history, and sharing fun facts about Shakespeare. Work was shared with parents at the conclusion, although the emphasis throughout was not on performance but on the process of acting.

Camp director Jennifer Rohn, who teaches theater and acting at Bennington College (and happens to be married to Edwards) said that the genesis of the idea came from her experience with her students there. “I find when kids come to college, they have no ideas of acting — just performing,” she said. “It is a challenge to get them to think about what is an actor’s job and responsibility. That’s why we want this to be process-driven.”

When Philipstown.info visited midday on Wednesday, Aug. 1, Edwards had gathered all of the children in a large circle around him, and in what might have caused some eyebrow-raising in another context, told the group, “Last time we learned slap and push; this time we’re doing push and fall.” Working with counselors (and erstwhile HVSF actors/teaching artists Teddy Alvaro, Patrick Halley and Gillian Wiggan) and asking questions of the group throughout, Edwards gave a demonstration of the safe ways to fight on stage.

“Feet together, shoulders in a neutral position, check to see that no one is behind you, take one big step back, sit on your heel; now butt to ground and roll down.”

After some practicing, fine-tuning was done:

​“First, look behind you to make sure that no obstructions are in the way. Muddy up the fall with energy. What else needs to happen when I push you?”

“Yes — make a sound when you hit the ground. … Instead of pushing in, push out with your hands; when you’re pushed, turn your head to the right.” 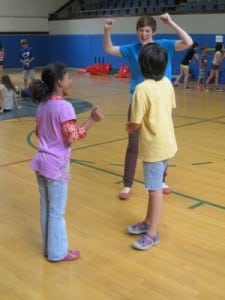 Gillian Wiggan demonstrates a sound effect to two campers. Photo by A. Rooney

Edwards and Alvaro proceeded to demonstrate a rather lackluster push and fall routine. Asking the kids if it was inspired, and getting a negative response, Edwards challenged them with what was wrong with it, interjecting the notion of character into the physical movements: “It has to look like there’s a modicum of violence involved. Based on the two characters here we have to create an illusion that there’s violence. If it’s two clown characters fighting, that would be different. What can we do?”

Again showing some more “wrong” examples, Edwards asked what was missing, garnering responses from the kids: “too slow, no energy.”

“Be confident,” replied Edwards. “Take big steps. Doing that looks like I’m mad, right? But it’s still not there. Let’s add some words: ‘You shot my mama!’ — add a big lunge to that. ‘You shot my mama!!’ Did that work? Yes! Is there something else we can do to make it better? My partner has to have energy, too. What’s his energy? Is he afraid of me?”

Asking the group to give him two words, and receiving “fear” and “confusion” in reply, Edwards then questioned them as to whether these emotions should be conveyed physically or verbally. A further demonstration ensued, this time crackling with ferocity as these layers were applied.

Edwards then instructed the group to “grab a partner, and, using the same words, add one component of physical energy and one of vocal energy. Start very slowly — half speed — and then we’ll build up to fast.” The kids broke off into twos and worked on this skill.

Later, Wiggan led one of the groups into an exploration of the scene they were working on, asking each person to choose, from a list, one or two items of their choice to add to the scene, and one other to be picked without choice: at least five seconds of silence, a moment of unison movement, an unexpected entrance, and more. The kids went off to fine-tune their scene incorporating these new twists.

HVSF Education Program Manager Nora Rosoff called the camp “hugely successful, from our perspective. The kids are loving it.” This week’s participants have come from as far away as Millbrook and Bronxville, with some local thespians-to-be as well. 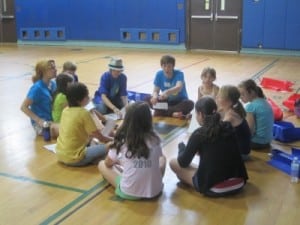 Gillian leads scene work at the end of the day. Photo by A. Rooney

Cold Spring’s Roisin Daly, who will be entering sixth grade at Haldane, came to the program after ​finishing up a stint in the Depot Theatre’s summer youth production of ​Oliver! Daly was enjoying it, stating: “They teach you all of the things included in acting; they actually teach you how to act.” Rosoff “definitely” thinks it’s going to grow and expand next year, adding that “it could mean more sessions, or expanding the age range; we’ll see.”

Rosoff says the goal of the camp, along with all of HVSF’s educational programs (which include hands-on workshops at many New York schools) is to “make Shakespeare relatable for kids and to help them understand that it’s tangible, not out of reach. This allows them to understand creatively how they can make the words their own.”

Details on all of HVSF’s educational programs, including the camp, can be found at hvshakespeare.org.