There is no zucchini hotline. There is a turkey hotline, however, manned every November by patient souls willing to talk America’s freaked-out poultry roasters through their various crises. The reason for this disparity is simple: A well-known corporation processes a large proportion of America’s turkeys, and its hotline generates tons of press coverage, a.k.a. free advertising. Zucchinis, meanwhile, may generate equivalent anxiety but completely lack corporate sponsorship. The upshot is that I am on my own when it comes to working through my zucchini issues. 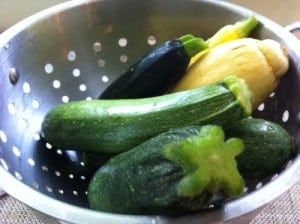 As a child, I loathed them. Of course I did. Didn’t we all? They were allowed to stay on the vine until they were so big you could club a turkey with them, not that anyone would do that. Bloated with water and filled with seeds and stringy fibers, they were completely beyond culinary rescue. Nonetheless, my mother, otherwise a wise and wonderful cook, saw fit to boil them. Boiling is seldom the best technique for any vegetable, and in this case it was disastrous.

With my own kids, I decided early on that my number-one goal as a cook should be to do everything in my power to make vegetables delicious, since eating an abundance of them is the key to good health and a sound household budget, yet vegetables are typically a child’s least-favorite food group. (You needn’t twist any arms to get kids to like carbs, for example.) I employed a mighty arsenal in this endeavor: pasta, cheese, butter, bacon, garlic, broth and batter. It worked. My kids love vegetables.

I didn’t hold out much hope for zucchini, however, despite the fact that the squash has come a long way since my own childhood. Zucchinis are now typically harvested when they are not much bigger than hotdogs, which is nice. But their flavor and texture, though vastly improved, remain somewhat ho-hum. 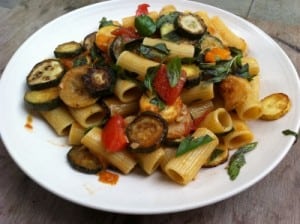 Pasta with sauteed zucchini and basil. Photo by C. Barbour

Imagine my surprise, then, when my early efforts at zucchini promotion were met with raging success. I owe much credit to Marcella Hazan, for it was in her cookbook, Marcella’s Italian Kitchen, that I found the zucchini recipe that evolved into the first of our household favorites. I have gone on to make zucchini fritters, which of course are delicious because they are, hello, fried, and tempura zucchini, ditto. I’ve made zucchini soup, eh, and brushed spears of zucchini with oil and herbs and roasted them on the grill. But at least once a summer I return to the original dish, which I use as a pasta sauce. It constitutes dinner on a hot night, with a green salad on the side.

My daughter, 8, is the pickiest eater among my three kids, yet she adores zucchini with a simple, pure affection that baffles me. The other day she said, “Mommy, do I have to eat the noodles?” She was selecting the zucchini from her dish, and leaving the pasta behind. To me, that’s just weird, but I don’t express these feelings openly. When it comes to zucchini, I know I must work through such issues​​ on my own.

Pasta with sautéed zucchini and basil

​You can use a mixture of summer squash and zucchini. And feel free to substitute a cup of canned tomatoes for the fresh tomatoes.

1. Start a pot of water to boil for the pasta.

2. Slice the zucchini into thin rounds. Heat the largest skillet you have over medium-high heat for one minute, then add the butter and oil. When they sizzle, add the zucchini in a single layer; you will probably have to cook it in batches. When the zucchini is starting to brown, transfer it to a plate and do another batch.

3. When the pasta waster is boiling, salt it (it should taste as salty as the ocean) and add the pasta.

4. Once all the zucchini is cooked, reduce the heat under the skillet, add the garlic, and sauté it for 1-2 minutes, until just golden. Return all the cooked zucchini to the pan, add salt and pepper and the tomatoes. Simmer together until the vegetables are meltingly soft, about 5 minutes. When the pasta is nearly cooked, add a cup of the pasta water to the zucchini mixture, then drain the pasta and add it to the zucchini to finish cooking. Meanwhile, chop the basil leaves. Just before serving, stir in the basil and parmesan cheese. Serve with extra cheese on the side.