Drive-thru loop may solve the problem

Garrison may be running a close second to Cold Spring when it comes to the frequency of issues that arise related to parking. Currently, Metro-North is undertaking extensive improvements to its parking lot at Garrison, causing some inconvenience, albeit in the name of a good cause — the end of very generous-sized potholes. Back in July, the Garrison Landing Association (GLA) erected signage reminding commuters that they are not allowed to park on its property west of the Metro-North tracks. 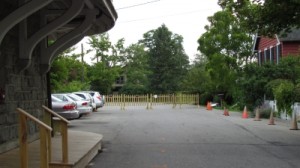 A picket fence now prevents commuters from parking illegally at Garrison's Landing -- but also makes it more difficult to drop people off for Metro-North trains. Photo by M. Turton

Unauthorized parking on the privately owned riverfront property has been a problem for years. In addition to more regulatory signage, a bright orange plastic fence was put in place to prevent vehicular access to the area located between the Depot Theatre and the building formerly occupied by Guinan’s Pub. Those steps were taken after warning letters from the Putnam County Sheriff and the GLA placed on the windshields of illegally parked cars failed to deter commuters looking for a bargain.

Recently, the plastic barrier has been upgraded, replaced by a more substantial wooden picket fence, a move that has pleased some, but not others.

Murray Prescott has lived at the Landing since just after filming of Hello Dolly wrapped up there in 1969. He has not been amused by the rogue commuter parking.

“I pay for my parking through my rent. Why should they park for free?” he asked. “It really gets jammed up down here.” Prescott also pointed out that commuters who park in the Metro-North lot on the opposite side of the tracks pay for parking through their ticket purchase.

Garrison resident Suzanne Willis recognizes that the illegal parking is an issue — but takes exception to the picket fence. “As an older person with a sometimes handicapped husband, it makes it much less convenient,” she said. “The turnaround space is woefully inadequate. It’s hard to get in and out without ending up on someone’s porch. And when the weather is bad, it makes it a much longer trek for older people.”

Peter Hoffman, GLA president, explained why the fence was installed. “We’re trying to eliminate parking down there. With the construction at the [Metro-North] parking lot, activities at the theatre and summer camp at the Garrison Art Center — people were parking everywhere,” he said.

Despite the fact that the Landing is privately owned, Hoffman said that behavior exhibited by people parking there illegally has been less than exemplary. “People have been rude,” he said. “They screamed at [GLA board member] Margaret O’Sullivan and at the Sheriff — saying we have no right to do what we’re doing. It’s private property. We do have the right.”

Hoffman also tried to put the issue in a larger context. “We want the goodwill of the community, and we want the Landing to be a pleasant place for the community,” he said. “We try to rent to those who will make it good — like the Art Center. We want no bad will. We got very upset when people accused of us having bad intentions.”

But Willis thinks that the fence goes too far. “I think civic-minded people would make it more accommodating for residents,” she said. “It seems a little arbitrary. There really isn’t anything going on down there — not yet.”

That is about to change. Plans call for a restaurant to be established in the old Guinan’s location, tentatively scheduled to open in 2013. “We’re hoping it will start soon,” Hoffman said. “There will be equipment and trucks down there during construction. It will be dangerous — just not a place to park.”

He also said that once the restaurant opens, it will use the area where parking is currently banned for customer parking. “And when the restaurant gets busy, people will have to use the Metro-North parking lot.”

With summer winding down, school just around the corner, and people returning from summer vacations, the number of commuters being dropped off at Garrison Landing each morning will soon increase significantly. There may be an interim solution in the works that will once again enable drop-offs closer to the train platform. When asked if GLA would consider creating a drive-thru lane which would still prohibit parking but allow vehicles to drive up close to the platform, Hoffman said, “We are definitely considering that,” adding, “but definitely no parking.”

David Lilburne, owner of Antipodean Books at the Landing, agrees that a drive-thru loop is the way to go. “That would be optimal at this stage,” he said. “There really are people who need to get closer to drop people off.”

Georgia Christy, a massage therapist whose office is located at the Landing, would no doubt welcome a more orderly flow of traffic. Christy’s car was recently hit by a vehicle as it backed out of a parking space, causing almost $1,100 in damages. The frustrating part for Christy was that both parking spaces reserved for her as part of her rent had been taken — forcing her to park next to her building. Had she been able to use either of her own parking spaces, the accident would not have occurred. In this case at least, the woman who hit Christy’s car paid for the repairs.