Informal poll: get rid of hospital to get senior center 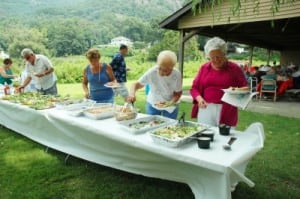 On an afternoon of blue skies laced with clouds, the approximately 65 aged residents and a few future seniors — such as three members of the Village Board — mingled, chatted and dined on a lunch of grilled hotdogs and hamburgers, salads, and cookies and cheesecake, washed down by a variety of alcoholic and non-alcoholic beverages. As in the past, the event took place at Mayor’s Park.

Trustees Matt Francisco and Bruce Campbell assisted Mayor Seth Gallagher as hosts, although Gallagher noted that Campbell deserved the most credit for making all the arrangements, soliciting donations of food from local stores and restaurants, and overseeing everything. Residents Steve Etta and Joe Russo lent a hand with the cooking and other chores on Saturday, too.

Gallagher took advantage of the occasion to plug development of the hospital site to get benefits in return. “We are working on trying to make something at the Butterfield property” that is good for the community as well as for the developer, he said, briefly addressing the seniors. The anticipated gains include a senior-citizen center, space for the current U.S. Postal Service branch when its present lease expires, and enhanced county presence. “We’re looking for more of a county interest in Philipstown,” he explained. “Also, it’s really important that we keep a post office in Cold Spring. That’s critical.” 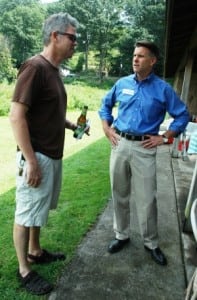 Ultimately, what happens will be the result of input from villagers, as well as the local government and the developer himself, the mayor said. Acknowledging that some residents want to preserve the old hospital, he warned that “to save the building, you may lose the whole project,” and with it a senior center and post office.

He then conducted an impromptu show-of-hands vote on how many seniors wanted to save the old hospital and how many favored tearing it down. About 15 people sought to save the hospital and 20 to 25 voted to get rid of it. But confusion clouded the vote, as one or more seniors appeared to vote twice — once for each option. So the mayor tried again, this time declaring in clear tones that saving the hospital was tantamount to losing a senior center, post office, and other sought-after structures. This time the vote came out overwhelmingly in favor of demolishing the hospital.

Later, as the mayor talked to seniors individually, one asked what she and her contemporaries could do to ensure success for the argument that the old hospital should go to make room for something better. “People have to come out to meetings and say that,” Gallagher replied.