The tumultuous process leading to ultimate approval, or rejection, of the proposed Butterfield Hospital project continued Monday night (Aug. 27), with scrapping among Butterfield Project Committee members over demolition of the old hospital, the detail and length of scrutiny appropriate for a preliminary “concept” plan, and the role of non-elected advisory boards.

Loss of the village post office if the Butterfield project dies likewise loomed large, and the discussions only got tenser when the Cold Spring Planning Board announced a desire to become the “lead agency” on the project for purposes of certifying local compliance with state laws.

Last winter, the Cold Spring Village Board took on the “lead agency” job when Butterfield developer Paul Guillaro proposed an innovative (for Cold Spring) Planned Unit Development (PUD), requiring an expansive zoning change, for the several-acre site. Guillaro dropped the PUD idea in May, citing frustrations with the approval process. He came back in July with a different design, the implementation of which relies on the property’s existing B4 zoning, albeit with revisions to allow mixed-use structures, including retail-commercial outlets, and the presence of all levels of government at Butterfield. 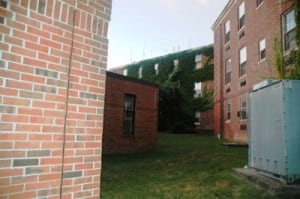 The back of the old Butterfield Hospital building; photo by L.S. Armstrong

Currently, the B4 zone allows medical and single-family residential usage as well as, by special permit, senior-citizen housing; it bars any government institution above the village level, a stricture that prevents construction of  a county-town-village office building and U.S. Postal Service branch, part of Guillaro’s plan.

To avert prolonged sub-board by sub-board reviews as well as to obtain multifaceted input on Guillaro’s new overall concept and find solutions to potential problems early on, the Village Board this summer created the Butterfield Project Committee, with two representatives each from the Village Board, Planning Board, and Historic District Review Board, all of which must sign off on one facet or another of the redevelopment.

The original hospital was built 1924-1925 in a neo-Georgian, classic style reminiscent of colonial Williamsburg, with a somewhat less stately expansion in the same basic style added around 1941 and a 1963 makeover that destroyed the original third floor and original architecture and replaced it with a suburban-modern building.

So far, the HDRB members have opposed Guillaro’s idea of tearing down the hospital.

“We’re open to anything but just outright demolition without having it demonstrated that it doesn’t work” to re-use the hospital, HDRB Chairman Al Zgolinski added. “That’s the part that concerns me. Why can’t the existing building be used for any of the other uses proposed?” Guillaro’s entire plan features three single-family homes, condominiums for retirement-age buyers, the municipal building, post office, and retail-commercial square.

Guillaro informed the committee, “I’m not going to develop this project with that [old hospital] building there. It’s just not economically feasible.”

Zgolinski advised that Guillaro “keep the ’63 addition,” if nothing else. “From what I hear, you’re saying you don’t want to deal with it at all. We haven’t seen” any evidence from Butterfield Realty of the need to demolish, he said. 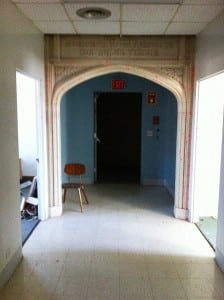 Mayor Seth Gallagher tried to steer the group toward considering the concept as proposed, or recommending realistic alternatives, and defined the committee’s role in part as “finding solutions to problems.”

That prompted protests from Bachan and Zgolinski that he simply dismissed them and their approach, defined by Zgolinski as “saving the hospital building.”

Trustee Matt Francisco, the other Village Board representative to the committee, defended the HDRB members as acting in their capacity as architectural experts; he urged that the issue of hospital demolition be settled before the committee takes up other aspects of the project to any extent.

“That is so false,” Bachan remonstrated, wondering why, if not housed in the old hospital, the post office and municipal offices simply could not be accommodated in other structures Guillaro builds at Butterfield.

The municipal building, senior citizen center, and post office “will not be built unless this [entire redevelopment] is built,” Gallagher asserted.

Guillaro said the post office has already rejected quarters in the old hospital.

The mayor said the differences over the hospital demolition and related issues reveal “a broader problem with how the boards work sometimes. They don’t realize that there are many repercussions to their work, and it’s very easy for them to work in their own little world … . In this case it’s going to have severe implications for the rest [of the village] — loss of the post office. I take that very seriously.”

The developer expressed exasperation that what he thought was to be a review of his preliminary plan and the related zoning kept getting bogged down in the minutiae usually reserved for studying detail-laden site plans. “I’m just trying to get to the zoning part and we don’t get there.” He pointed out that under the existing B4 provisions he could construct 15 or 16 single-family homes and/or medical-related facilities.

“Everybody’s ignoring that I can do these things” now at Butterfield, he said. “What I’m having a hard time with is, why do we discuss things that are as a right” a developer’s prerogative?

“What is the definition of ‘as a right’?” Planning Board Chairman Joe Barbaro questioned in return. Whatever Guillaro designs under existing zoning, “the Planning Board has a right to review it and perhaps limit it because of other considerations,” Barbaro said. “You’re still coming to the Planning Board to get approvals.”

Guillaro informed the committee that the post office wants to install temporary trailers on the Butterfield site, to use when its lease runs out at the Foodtown Plaza this fall.  “I don’t have a problem with it as long as we’re going to be moving ahead with the plans,” he said. “I’m not renting space to the post office so the project can just sit. I need to have some direction in the next couple of months.”

The committee also took up a nine-point Planning Board critique. In one item, the Planning Board said a condominium building “is still too large and needs [to be] softened”; in another, the Planning Board expressed concern about the condo concept altogether. Condominiums pay less in taxes than comparable fee-simple (such as single-family, stand alone) homes.

“I think the Planning Board feels it is very unfair for low- and middle-income seniors to be paying one tax rate and wealthy seniors from out of town moving in and paying a lower rate,” said Arne Saari, one of two Planning Board members on the Butterfield Committee. “In other words, you’re subsidizing.”

It’s not clear whether buyers of the condos would be out-of-town newcomers as opposed to Cold Spring residents selling existing homes and downsizing.

Gallagher answered that in another sense, it’s “a subsidy going back the other way, too” because the childless condo-dwellers, aged 55 or above, would not burden the school district with additional enrollments and because the project includes retail and commercial space. Overall, “it’s going to have a net-positive impact” on the tax base, he said. He likewise recalled legal advice from the village attorney that the village cannot mandate the form of ownership of structures legally built. “I think it’s not really the purview of the Planning Board.”

The critique also announced that as the project gets more formally underway, “the Planning Board wants to be designated as lead agency … . Since the PUD component of the original plan has been removed, we feel our board is better suited for this review.” Barbaro explained that “we’re just putting our stake in the ground.”

The mayor was not enthused. “My instinct is to keep it [lead agency status] with the Village Board, especially as you can see the problems we can have with boards and just the way things can get really stalled in ways that certainly are legal but don’t necessarily serve the needs,” he said. “It is a reality. That’s what we’re dealing with here and that’s why we have this larger group and why we’re trying to do this thing together.”

He described an official June Planning Board report on Butterfield as “very personal” and “not professional” and read a sample. In it, the Planning Board called Guillaro’s PUD timetable “surprisingly unrealistic” and said it “might have reflected his perceived ability to bulldoze the community into acceptance by angling our need for a new post office location. If not fulfilling Mr. Guillaro’s expectations of lightning-fast approval caused him upset, frankly, he deserved it.”

Last March, the report added, the Planning Board had determined “that a pause was required to solicit the views of the community rather than continue marching forward like lemmings off a cliff with a proposal that was not sufficiently vetted and that the village would be living with for decades to come. “

Gallagher termed such language “very emotional. And we’re trying to get away from that.”

Public comment, a contentious topic at meetings of late, also came up when an audience member, Arthur Lopatin, posed a question. Gallagher suggested the committee entertain it but not accept further audience remarks.

“What are you, a Stalinist?” Lopatin asked.

“You call a cop and make me leave,” Lopatin challenged. “I dare you to. Is this meeting open to public comment or not?”

Again the mayor said it was not and Lopatin replied, “I stand corrected,” and stormed out, with a parting epithet: “This is a farce.”