To get the Butterfield project underway and save the post office, the Cold Spring Village Board Tuesday (Aug. 28) discussed a daring and perhaps last-ditch tool — revising village law to remove sole authority over historic-district demolitions from the village’s Historic District Review Board and allow buildings to be torn down for important public reasons.

At the same meeting, Mayor Seth Gallagher announced that Butterfield developer Paul Guillaro wants to return to the board to express fears his project will get rejected or held up indefinitely. Guillaro maintains he cannot proceed without razing the derelict old Butterfield Hospital and openly declared his intent last October when he unveiled plans for redeveloping Butterfield. However, Historic District Review Board members have voiced opposition to demolition. The HDRB scheduled a workshop for next Wednesday, Sept. 5, on the issue. 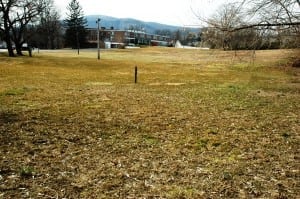 Guillaro’s proposed complex includes space for a senior-citizen center and post office and intergovernmental municipal offices, all off the table if the project never gets built. Scheduled to lose its present quarters at the Foodtown Plaza on Aug. 31, the post office remains there on borrowed time, expected to end this fall, as action on Butterfield continues.

The mayor outlined the village’s current demolition law, enacted in 1976, and compared it to similar towns’ restrictions. According to the mayor, Cold Spring’s law, Chapter 64 of the village code, is unusual in its vagueness on the rationale for considering a building “historic,” the conversely strict criteria an owner must meet before a historic building can be razed, and the HDRB’s sweeping authority, including power to delay a demolition for a year even after granting approval.

The law contains no way to appeal to the Village Board to override an HDRB and, as Gallagher noted, no allowance for condoning demolition in “unusual and compelling circumstances” — unlike the practice elsewhere. The code provides a single outlet, allowing demolition of a historic structure if the Village Board, a judicial court, or fire department deems the building so hazardous as to require removal.

For years, owners of old Cold Spring buildings apparently went to a former building inspector and obtained permission for demolitions, with the mandate for HDRB approval rarely or never invoked. Three weeks ago, Guillaro’s firm filed a demolition request with the current building inspector, who passed it along to the HDRB as procedure demands.

Referring to the loss of two Main Street buildings torn down in recent memory, Trustee Matt Francisco pointed to “a failure that’s been happening without [HDRB] review.” He reacted skeptically to Gallagher’s proposal to change the demolition law. “Are we suggesting changing the code for an existing application? That does not sound like a good idea.”

“We have to look at changing it,” Gallagher replied, even with Guillaro’s application pending.  “What are you going to say when it gets denied and he pulls out and we lose the post office, and the senior center, and all the other stuff? That’s the decision being made.” He said the code could be revised, ensuring a better law for use “not this time, every time. Why don’t we start with this one? You’ve got to do it when you’ve got to do it.”

Francisco said boards like the HDRB are supposed to be autonomous so “they’re not conflicted by these other interests,” such as preserving a post office. “You have to expect that the HDRB is going to run through their processes,” he said. “The reason these processes are long and drawn out and very deep is because there’s no way back. Once the hospital is gone, it’s gone.”

Gallagher argued that the HDRB should weigh the good of the broader community and not base decisions solely on perceived historic value.

“Part of what I think is so really special about Cold Spring is the architecture,” Francisco commented.

“What I like are the services also that you have in the community,” Gallagher responded. “One of those is the post office. That’s part of this whole equation,” and if Guillaro withdraws his plan, “we lose the post office. I’m just not willing to go there.”

Trustee Chuck Hustis said he “would not be a bit surprised if the post office lands right up at Perk’s Plaza on Route 9.” Several miles from the village, the shopping plaza can only be reached by village residents by car, unlike the current post office or a potential replacement at Butterfield.

Francisco acknowledged “that the post office is very important. I just don’t respond well to fear and making decisions under threats. I think you have to have to have the stomach to say, ‘I hope this works out; I’m just going to do the right thing.’” He attributed much of the angst over losing the post office to “threats from the developer.”

Trustee Bruce Campbell observed that “there were always discussions of demolition” at public forums on the project over the last several months. “Why has it taken all this time” for critics to “come up and start talking about the historic value of the building?” He said he referred to individual residents.

Trustee Ralph Falloon summed up the Village Board’s dilemma: “Do we get involved and make it look like we’re supporting the developer and we’re going to change the zoning, or do we say, sorry, everybody has to wait for the final determination by the HDRB, which could be a year from now, and then we’ll see what happens?’ We lose either way.  If we step in and say, ‘let’s get something done,’ or we say ‘we’ll wait until the time runs out,’ everybody loses lone way or the other.”

The mayor and trustees consulted Village Attorney Stephen Gaba on the questions raised.

The board also briefly took up a related issue that surfaced on Monday when the Planning Board asserted a claim on being the “lead agency” on the Butterfield Project for purposes of certifying compliance with state laws. The Village Board took on the lead agency role itself last winter.

“Why do they care?” Falloon asked.

“It’s a control thing,” the mayor said. “What they forget is this still requires zoning changes.” The Butterfield site’s existing B4 zoning does not allow commercial-retail uses or facilities with multiple layers of government. “I think it’s better that we continue” as lead agency, the mayor said.

“I do, too,” Campbell concurred.

Remarking that “there are certain components of boards that are going to say ‘no’ until the applicant leaves or until they legally can’t say ‘no’ anymore,” Falloon wondered “how we get all our boards on the same page” on Butterfield. “Every single unit of this project is completely opposed to the others, from the developer to the Planning Board to us,” he said.

Gallagher said the Butterfield Project Committee was supposed to resolve such differences. He advocated everyone adopt a willingness “to try to reach a solution. We have to figure out if we are going to give up on this or not, practically; or, if not, what is the way forward.” 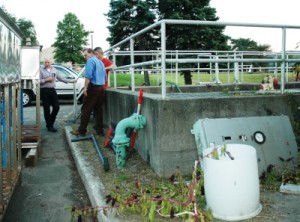 The board began its workshop at the wastewater/sewage treatment plant on Fair Street, descending to a stifling cellar and the innards of an aging system. A recent study of upgrading the aeration equipment led to the assessment by the aerator supplier that other decades-old equipment likewise should be scrapped in favor of newer models. But that would turn an endeavor estimated at $328,000 into one with a $1.45 million price tag, consisting of $870,000 for a new aeration system housed in a new building and $580,000 for replacing the emergency generator and electrical switch gear, according to Bart Clark of Oakwood Environmental Associates, the village’s consultant engineer.

During the sewage plant tour and subsequent meeting in the village hall, Clark said that some of the recommended upgrades address serious personnel-safety concerns: The hot basement can flood but it contains electrical wiring and machinery, and the ventilation system does not comply with current regulations. “Anything that is a life-safety issue is a high priority,” Clark told the mayor and trustees.

“It sounds like work that needs to get done, but how do you pay for it?” Gallagher mused. To overhaul everything, he said, “you’re talking about a fairly sharp increase in user fees” — bills residents receive — and the village also must deal with inflow and infiltration of errant sources of water into the system, a separate problem from the sewer plant inadequacies.

The board informally determined to investigate its options.