Beacon a haven for ‘unadoptables’

Mid Hudson Animal Aid (MHAA) in Beacon is also known as the Essie Dabrusin Cat Sanctuary, an apt name for this no-kill, free-range cat shelter. The sanctuary’s policy is to give as many cats a chance to be adopted as possible, deciding to keep cats that many other shelters would deem unadoptable.

Most shelters would usually euthanize two groups of cats that have their own areas at MHAA: those testing positive for feline leukemia and for FIV (feline immunodeficiency virus). Cats with both of these viruses can still live long, healthy lives and are still adoptable. Since feline leukemia can be transmitted to other cats via bodily fluids, however, a cat with leukemia must be adopted as an only cat or with other leukemia cats. 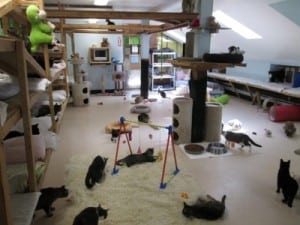 The leukemia room at the sanctuary also requires precautions such as shoe spray and hand sanitizer for those entering and exiting. Cats with FIV, on the other hand, can live with non-FIV cats because of the low risk of transmitting the virus, and the FIV area is an open-air enclosure in the quiet room at the sanctuary.

Feral cats are another group normally considered unadoptable, but MHAA helps socialize feral and semi-feral cats so that they can be adopted. Through their program Feral Friends, which started in 2009, feral cats are partnered with volunteers who visit at least once a week to give treats to, talk to, or play with their assigned cats. Audrey Lodato, manager of MHAA, says that in 2011 alone, 86 feral friends were adopted out, testifying to the success of the program.

The 21-year-old building that houses MHAA was once a greenhouse, explained Lodato, a long-time animal rescuer who has managed the shelter for the past three years. Because MHAA is free-range, the cats have ample space to roam; even though some have to be separated for special dietary or medical reasons, they are often housed in fenced-off areas nicknamed “airlocks” rather than in cages. Lodato explained that most shelters decide against going free-range because they think the cats will get sick more frequently, “but it’s actually the opposite. The animals, as long as they are taken in properly, are actually a lot happier, which leads to a lot less sickness.” 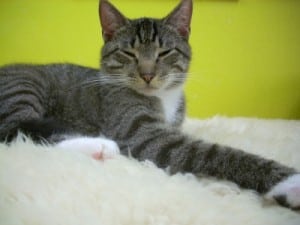 Baca hangs out in the sanctuary lobby. Photo by J. Tao

The sanctuary’s Great Room, with its elaborate system of catwalks and a multitude of cat trees, holds the majority of the felines, who do look comfortable on their pillows and in their beds. During much of the year, the cats also have access via pet doors to a screened-in porch, where many of the feral and semi-feral cats prefer to lounge (at least while the humans are around). In addition to the special-needs areas, there are also rooms with cages for cats that need to be quarantined, including the ever popular, tiny, mewling kittens.

The sanctuary is named after the late Essie Dabrusin, who, along with friend Ruth Valenti of Newburgh, used to rescue abandoned pets in Newburgh in the 1970s. By the late 1980s, Dabrusin was finally able to establish a shelter across the way from the Animal Rescue Foundation (ARF) established by her friend Barbara Shea.

Initially run entirely on volunteer labor, MHAA is a nonprofit, 501(c)3 charity organization that relies on private donations for its operation. Lodato reports that they currently accommodate a maximum of 200 rescues during the height of kitten season (late spring through the summer), adopting out about 30 cats every month, with at least one FIV cat adopted each month. Even with this impressive adoption rate, they still have to turn down about 200 cats a month, taking only those that need the special help of MHAA. 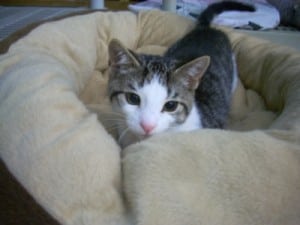 Ravioli, 'the devil kitten,' gets ready to pounce. Photo by J. Tao

If you are thinking of adopting a cat, volunteering at the sanctuary is a good way to get to know some of the cats there. Shy cats, as well as cats who are not in their element amongst so many other cats, are often overlooked by adopters. There are many sweet cats that have been at the sanctuary a long time, according to Lodato.

Take Didieo, for example, the calm, polydactyl (extra-toed) tabby who loves everyone but who has a nasal polyp, or Ling, a former feral tabby, or Caprice, a small, all-black cat who needs a little patience to get to know. (Lodato mentions that in many shelters, black cats are not adopted as often because of people’s superstitions about black cats; one-third of the sanctuary’s cats are indeed black or black and white.) The sanctuary is open for adoptions daily from noon to 4 p.m.

There are other reasons to visit the sanctuary, even if you are not considering adopting a cat. Animal lovers who cannot accommodate a cat or another pet at home can volunteer in the Feral Friends program to socialize feral cats, and of course to give love to friendly cats, as well. Volunteer hours are from 9 a.m. to 4 p.m. every day.

If you cannot adopt or devote time as a volunteer, MHAA accepts monetary donations at their website, midhudsonanimalaid.org, or mailed to 54 Simmons Lane, Beacon, NY 12508, or donations of pet and office supplies (detailed on their website’s wish list).

MHAA will also hold its Third Annual Catstock Benefit Concert, with four bands playing at Beacon’s Howland Center on Oct. 13. Tickets may be reserved at 845-831-4321 or purchased at Dream in Plastic, 477 Main St. in Beacon, for $15.