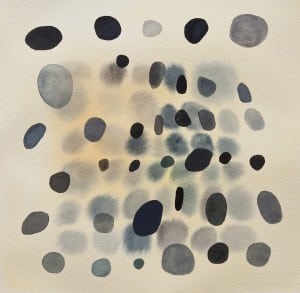 In a dual exhibit, Ann Provan will be showing her new watercolors and David Provan will be showing sculpture at Cold Spring’s Marina Gallery. The show opens on Friday, Sept. 7 at 6 p.m. and continues through Sept. 30. The show’s title, Converging/Parallel, refers to the hazards and benefits of two artists trying to maintain their unique artistic visions while living in a close, domestic situation.

Ann Provan, after graduating from Berkeley High School in California, moved to Paris and eventually began modeling, working for various fashion houses, including Christian Dior. During this period, she became friends with Karl Lagerfeld and the fashion illustrator Antonio Lopez, who encouraged her to pursue her interest in art. Later, returning to the U.S., she earned a master of fine arts in painting from the San Francisco Art Institute.

During this same period, David Provan graduated from high school in Palo Alto, Calif. and joined the Navy, for whom he flew reconnaissance missions in Vietnam. After his discharge from the service, he lived in Japan building traditional houses by day and tending bar in Yokohama at night.

Eventually, his long-standing interest in Buddhism drew him to India and Nepal, where he became ordained as a Tibetan monk and, for a year, studied in Yang Leshod monastery near Kathmandu. Returning to the West, he earned a B.A. in painting and architecture from Yale and a master’s degree from the Royal College of Art in London. Asian philosophy, art and design have been continuing influences on his work. 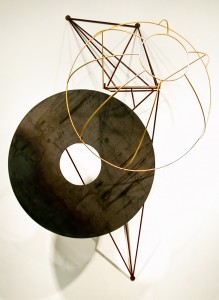 In the late 1980s Ann and David met at a New York City art opening and, finding much more in common than their California origins, married and settled in SoHo. After the birth of their twins, Evan and Zoë, they moved to Cold Spring in 2006.

Ann Provan’s work has evolved into watercolor meditations on space, incorporating objects and their shadows, as well as distortions like magnification, transparency, focus or the lack of focus. David Provan’s work consists of sculptures in metal, wood or clay that propose alternate views on how the universe began and how it conducts itself.  They’re modernist cosmological models striving to explore the motion and duration of the cosmos through pure structure.

The Marina Gallery is located at 153 Main St. Gallery hours are Thursday through Sunday, 12 to 6 p.m. or by appointment.