Anniversary to be celebrated with music and other events

On Sept. 15 and 16, the Chapel of Our Lady Restoration in Cold Spring will commemorate the 35th anniversary of its restoration with a celebratory weekend of musical performances, a historical exhibition — which will include prints of Thomas Wharton’s sketches of the chapel and village that were recently discovered in the New York Public Library — as well as tours, refreshments and other festivities. Local musicians will headline the event.

Local folks may be familiar with the chapel, to the extent that they know its location and may have heard something of the summer concerts held there or, perhaps, have seen one of the funky posters hanging around town advertising the Sunset Reading Series, which hosts nationally known authors at the chapel throughout the summer and fall.

According to members of the chapel’s board, the hope of the anniversary celebration is to make the Chapel of our Lady Restoration an integral part of the Philipstown community and to increase both its use and the involvement of residents in its care and preservation. 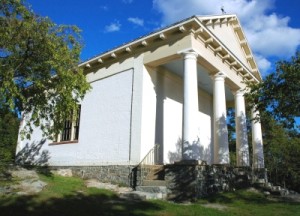 Built in 1833 of locally made red brick covered with stucco, the idea for the chapel was conceived by Governor Kemble — a lifelong patron of the arts and former diplomat who was a partner in establishing the West Point Foundry — who also donated the land and funds. The chapel was designed in the Greek Revival style by a young immigrant, 18-year-old Thomas Kelah Wharton. Abandoned in 1906, the building fell victim to the forces of nature and time.

The structure was ravaged by fire in 1927, and it laid in ruin until 1971 when, in the words of The New York Sunday News, “A Methodist, a Lutheran, a Jew, a Presbyterian or two, a scattering of Episcopalians and a handful of Catholics,” including actress Helen Hayes, came together to buy it from the archdiocese and undertake its restoration. Once the restoration was complete, the chapel was dedicated as an ecumenical site in 1977. In 2009 a low-laying and “green” addition — the chancery — was made to the locale.

Board member Marcelline Thompson said, “The next chapter for the chapel features essential objectives of fundraising and outreach … driven by the desire to more fully embrace the community and promote its involvement.” According to Thompson, “There are many needs, not the least of which is to air condition the chapel, but the board’s great hope is to inaugurate a schedule of opening hours so that this beautiful building, listed on the National Register of Historic Places, can become a destination, one to be enjoyed by all.”

The proposed fjord hike/bike trail (connecting Cold Spring and Beacon along the Metro-North line) and the current renovation and rebuilding of the West Point Foundry Preserve situates the chapel at the heart of Cold Spring’s waterfront, a location that could make it a port of call for tourists and residents alike. 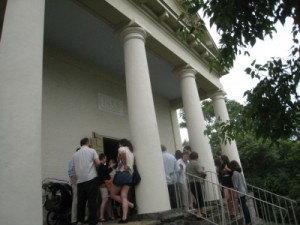 Mike Armstrong, president of the chapel board says, “We’re encouraging construction of a path on the west side of Market Street up to New Street so that people coming from Metro-North could use that route as an anchor to the river walk. Conceivably you could start at Foundry Dock Park, visit the chapel, and continue up towards Main Street where you could connect with the river walk going north.”

To keep the chapel open on a more regular basis would require it being staffed, however, and right now the nonprofit organization does not have the funds to pay for such an expense. The entirely volunteer board already puts time in on weekends to keep the free music series going and to check in at the facilities after weddings.

Each board member was quick to point out the chapel’s ecumenical character as being an essential part of its character. Despite the many wedding ceremonies that take place on the site, the Chapel Restoration was established as an all-inclusive, universally welcoming, non-denominational venue. The board is seeking to find ways to encourage residents and visitors of every creed, color and character to enjoy the beauty and peace that the space and setting cultivate.

Chapel board member Gail Greet Hannah, emphasizes this sentiment. “My hope for the future of the Chapel Restoration,” she says, “is that we are able to expand our role in the cultural life of the community and to collaborate strategically with our Putnam History Museum and Foundry Preserve partners to tell the compelling story of Cold Spring’s historic development and significance.”

In November 1834, the New York Mirror, wrote about the Chapel of our Lady: “Its situation, opposite West Point, on a high rock overlooking the Hudson, and surrounded by majestic mountains, is extremely well chosen, and the traveler … cannot but be struck with its romantic beauty.” Thompson concurred, “With everyone’s help, [the chapel] may finally take its rightful position in the pantheon of the area’s important sites and be a must-see stop on the route of the little green trolley.”