With no tax increase permitted, project hinges on community support

You see them at all manner of facilities — from art galleries and hospitals to community centers and rail trails. Those plaques, the very solid ones that permanently express gratitude to the people, organizations and companies whose financial contributions made an important project possible. Organizers of the PLAY Haldane campaign, which seeks to raise $2 million to upgrade Haldane’s main athletic field, locker rooms and auditorium, hope to see just such a plaque near newly refurbished facilities a year or two from now, specifically thanking members of the Founder’s Club. 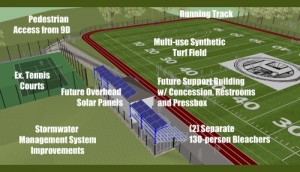 The Founder’s Club is being established to recognize donors who help raise $100,000 towards PLAY Haldane through contributions of $5,000, $2,500 or $1,000. Dan Hughes, who co-chairs the appeal along with Haldane School Board trustee Jon Champlin, said that despite the sluggish economy, the Founder’s Club is off to a good start. “As of now, we have raised $11,000,” he said. “We have many inquiries and ongoing conversations. Some donors are discussing how they may be able to make a more significant donation and how that could be recognized.”

Hughes was reluctant to single out individuals who have already pledged but did say, “We have had some nice donations by Haldane alumni who want to give back to their school.” He also said that administrators at Haldane “made a very nice donation, and we are in discussions with several other local associations.”

Fundraising is almost always a key component of any big community-based project, but in the case of PLAY Haldane, it is perhaps even more vital. Trustees from the Haldane School Board have stated that the project cannot result in any tax increase — so funding must come from other sources. The project does qualify for state aid.

Included in the project is a new artificial turf game field, which, in addition to football, will host boys’ and girls’ soccer and lacrosse at the varsity and modified levels. The game field will also allow physical education classes to be conducted outdoors. A multi-lane practice track for Haldane students that will also serve as a walking track for the community will also be constructed, along with outside restroom facilities and a concession stand. Locker rooms have long been a source of embarrassment to school officials and will receive a makeover. Also integral to the project are improvements to equipment and facilities in the school auditorium. State funding requires that the project include indoor improvements in addition to upgraded facilities outdoors.

Fundraising won’t stop with the Founder’s Club. In an appeal letter widely distributed in the community, Hughes and Champlin said, “We also plan to have additional opportunities to purchase the naming rights to a seat in the bleachers, the auditorium and even bricks in the walkways to the file. We plan to celebrate and publicize our donors in various areas such as the local paper, our website, a donor board located at the school, etc.”

In an email to Philipstown.info, Hughes said, “I do expect more grassroots donations once we unveil some sponsorship opportunities that are at different financial levels than the Founder’s Club. The Philipstown community is so supportive … no one could ask for more than our community does for good causes.”

Donations can be made to the Blue Devil Booster Club – Fields Project, a 501(c)3 organization, which is handling the private fundraising for the PLAY Haldane project. Contributions are tax deductible.

In-kind contributions will also be possible as the project gets closer to startup. “We have been in discussions with local contractors and businesses and hope to secure in-kind donations for labor and materials, all under the supervision of the engineers, once we are closer to actual product/field specifications,” Hughes said.

While $2 million is a considerable amount of money, Hughes stressed that the improvements proposed as part of PLAY Haldane are very reasonable. “This is … not about making any of our Haldane facilities ‘world-class’ luxury venues. The upgrades and renovations planned are cost-efficient, practical, well thought-out and much needed, not luxurious and extravagant.”