Visitors to Cold Spring may notice a grand building just west of the Metro-North station that looks for all the world like a Greek temple, standing proudly on an outcrop of rock, its handsome, columned portico facing the Hudson. Built in 1833 or 1834 as a Catholic church, the Chapel of Our Lady, it was abandoned in 1907 when Our Lady of Loretto on Fair Street was completed. The chapel burned in 1927 and lay in ruins for decades. In the 1970s, a non-denominational group galvanized by actress Helen Hayes bought and restored it as a historic landmark. 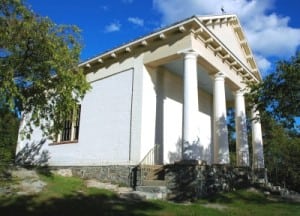 The restoration, finished in 1977, uncovered some tantalizing clues to the chapel’s origins. Somehow, perhaps through a drawing that has since been lost, the restorers learned that someone named Thomas Kelah Wharton designed the chapel. They thought Wharton was “a native from Ohio,” just 16 when he did the work, and duly noted those facts in their program for the rededication celebration for the building in its new incarnation as a non-denominational structure.

Neither was true. Wharton’s story, revealed in journals he kept as a teenager staying in the Hudson Valley, is far more intriguing.

On June 3, 1830, an English mother and her six children arrived at New York Harbor, bound for a new life in Ohio, where the head of the family had already started to farm. The eldest child, Thomas, prodigiously gifted in art, was just 16 years old. Thirty years later, Thomas Kelah Wharton celebrated that day with his wife and small son in his home in New Orleans and read them passages from the extraordinary journal he kept as a teenager, describing his voyage to America, initial year in Ohio, and then the 1830s in New York and the Hudson Valley. Wharton had become a prominent architect in New Orleans and a staunch supporter of the South. At 46, he could look back with pride on the rich record of his life and works.

He could not know that within two years it would all fall apart: The South would secede from the Union, a terrible Civil War would break out, New Orleans would surrender to the Union, and Wharton would die only a few weeks after Union troops took control. But his journals survived, and the stories they tell carry us back to an earlier time. America’s coming of age is mirrored in the wide-eyed narrative of an immigrant who was himself coming of age. 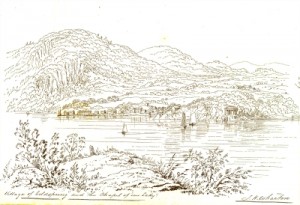 Wharton’s journals open a window into Cold Spring’s early cultural life. After spending two years in Ohio, Wharton returned to New York City in May 1832 to apprentice with a well-known architect, Martin E. Thompson. His diary records how he fled a cholera epidemic that summer and traveled north by steamboat to the estate of a wealthy doctor, David Hosack, in Hyde Park (now the Vanderbilt estate). There he met other guests on the estate, Sylvanus Thayer, the Superintendent of West Point (known today as the “Father of West Point”), and Gouverneur Kemble, the owner of the West Point Foundry in Cold Spring. Thayer warned Wharton against returning to New York, which was still fighting the epidemic, and invited him to stay as his guest at West Point.

Wharton amazed everyone with his artistic skill — what he called his “competent pencil.” His exquisite pen-and-ink drawings of the Hosack estate are now in the collection of the Metropolitan Museum of Art. In the fall of 1832, he fell in love with the Hudson Highlands and roamed looking for views to draw. Superintendent Thayer boated up and down the river with Wharton. He even arranged for cadets from time to time to carry Wharton’s drawing board and to clear brush to improve views.

Wharton attended many dinner parties with Kemble, Thayer and others, and it was almost certainly during this time that the 18-year-old Wharton, with barely a month of formal architectural training, designed the Chapel of Our Lady. Early the following spring, he tells us that he delivered an “elevation” of the chapel to Kemble. From 1832 through the early 1840s, he made many sketches, watercolors and oil paintings of Cold Spring, the Highlands and the Hudson Valley. 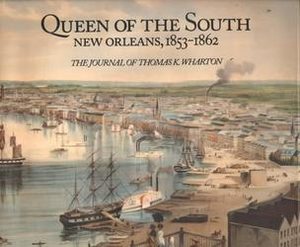 Most of his work appears to have been lost. During the 1850s, however, Wharton copied his Hudson Valley diaries and many of his drawings, meticulously accurate pen-and-ink sketches, into a series of 7½-by-9½-inch journals. His widow, half a century later, sold those journals and sketches to the New York Public Library (NYPL). The early Wharton journals, from his journey to America in 1830 through his time in Ohio, were transcribed and published in 1956 by the Ohio Historical Quarterly. His later journals, set in New Orleans, from 1853 to his death in 1862, were published in 1999 by Historic New Orleans as The Queen of the South, an exceptionally well researched and beautifully presented record of the antebellum South.

The Chapel Restoration, working with Steven Walton and students from Michigan Technological University’s Industrial Archaeology graduate program (who did the archaeological work on the West Point Foundry itself), has now transcribed the New York and Hudson Valley part of the diaries (1832–1834). The Chapel Restoration plans to make them accessible and searchable on its website (chapelrestoration.org). It is also selling copies of Wharton’s sketches of Cold Spring and environs, including Indian Brook Falls. Funds from these sales will be used for the Chapel’s ongoing conservation.

One of the mysteries about Wharton is why his work is not better known or more widely published. A story related in the diary may partly account for this. In the entry of March 23, 1833, Wharton says that the artist Robert Weir invited him to take over the contract for landscape engravings at George Pope Morris’s newspaper, the New York Mirror. In a May 11 entry, just a few weeks later, Wharton writes that Weir reneged on the deal: “… and during the conversation that followed I was greatly surprised at Mr. Weir’s total want of candour and consistency. His language was very different from that at our previous interview, and it appears that he has changed his mind about relinquishing the landscape department of the Mirror. He gave us to understand that the present engraving [View of New York Harbour from Brooklyn Heights] might be proceeded with, but as to the future supply … he would not say anything satisfactory.”

In 1834, the New York Mirror published a steel engraving of Wharton’s drawing of New York Harbor, but nothing more, ever. It is ironic, then, that the drawing that accompanied the story of the dedication of the Chapel of Our Lady in the New York Mirror’s issue of Nov. 8, 1834  — a story that celebrates Wharton’s “first commission” — is by his nemesis Robert Weir.

The memory of a promising young artist on the Hudson, who in the time before cameras recorded the Highlands and Hudson River with astounding fidelity, has now faded, most of his work lost. But the chapel he designed endures, along with the remarkable journals that tell his story.

How to read the journals

The Manuscripts division of the NYPL has Wharton’s journals, covering his coming to America, time in Ohio and New York, an 1853 journey from New Orleans to Boston, and his final years in New Orleans. A microfilm record is available for study to researchers. That division also keeps a collection of 96 Wharton sketches and drawings. Another 50 or so prints, drawings and watercolors can be found in the NYPL Prints and Photographs collection. A number of sketches are also preserved at the Metropolitan Museum of Art.