Anthony Musso will speak about his new book, Hidden Treasures of the Hudson Valley, at the Desmond-Fish Library on Thursday, Sept. 20 at 7 p.m. The Hudson Valley boasts “mainstream” historic sites such as the Franklin D. Roosevelt Home and Presidential Library and the Vanderbilt Mansion, both in Hyde Park, which attract thousands of tourists every year. At the same time, a number of relatively unknown yet historically significant locales in the region often go unnoticed.

In most cases the sites are hidden in plain view, positioned along heavily trafficked roads or in the midst of city centers. 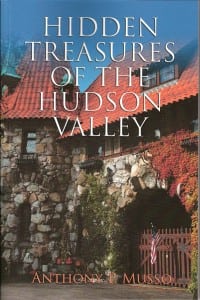 In Hidden Treasures of the Hudson Valley, existing buildings, such as early stagecoach stops and prominent inns that served as meeting places for some of the nation’s first political leaders, are identified in narratives that describe each one’s significant history. Aging structures that line the streets of local cities, towns and villages served as critical components of the Revolutionary War, early American industry, and social hubs during past centuries.

In the Hudson Valley, the Continental Army resisted the advancement of British troops; entrepreneurs such as siblings William and Andrew Smith developed their cough drops; and Matthew Vassar gained significant wealth brewing beer before founding one of the nation’s most prestigious colleges. Discover a local theater whose stage once featured the talents of Frank Sinatra, Enrico Caruso and Sarah Bernhardt, and learn why a small city in the region was once known as the “Hat Capital of the United States.” Transformed structures built for one purpose and now serving another hold historic secrets. Identify meetinghouses where Quakers worshipped and travelers in the Underground Railroad sought refuge. Learn how a peaceful country estate became the epicenter of the 1960s drug culture.

Anthony Musso worked as a writer/editor and media spokesman for the U.S. government during a 38-year career. He is also a freelance weekly columnist for the Poughkeepsie Journal and writes regularly for a number of national magazines. Musso’s latest book, Hidden Treasures of the Hudson Valley, which was published in 2012, features 55 off-the-beaten-track sites in the region, all of which boast significant ties to local and national history.  Copies of the book will be available, and there will be a book signing at the conclusion of the talk.

Visit DesmondFishLibrary.org for more information, or call 845-424-3020. This program is free.