Cabaret in the Country returns, with a nod to that decade

Gypsies, Tramps & Thieves is a romp through the beloved music of the ’70s. Included are not only tunes from the great singer/songwriters of the era (Carly Simon, Dolly Parton, James Taylor to name a few), but also a smattering of the craziness that was disco (ABBA, Donna Summer). Also expect to hear tunes made famous by the likes of Cat Stevens, the Doobie Brothers, Billy Joel, Todd Rundgren, Marvin Gaye, Roberta Flack, Styx, and even Blue Oyster Cult.

In medley after medley, award-winning New York City cabaret performers Karen Mack and Michael Holland take the audience on a rollercoaster ride through the days of Studio 54, The Troubadour, bell-bottoms and other accessories of the era.

Holland created all of the arrangements for the recent Broadway revival production of Stephen Schwartz’s Godspell. An in-demand studio musician and vocalist with a four-octave range, Holland was the musical director for the 2010 Drama Desk Awards. His solo recordings are available on iTunes. 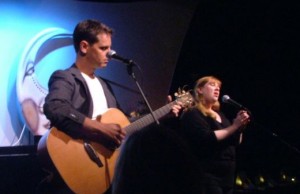 Mack is a five-time Manhattan Association of Clubs award-winner for her vocal performances in and around New York City. Recently, she was part of the 25th Anniversary Gala of the New York Pops at Carnegie Hall, and club appearances include Town Hall, Symphony Space, The Bottom Line, Joe’s Pub, Fez, The Bitter End, Caroline’s, The Supper Club, the Plush Room (San Francisco), as well as “numerous college keggers.” Mack was part of the original New York City cast for the readings of a then-unheard of new musical called Wicked.

As a duo, Mack and Holland have created a series of long-running cabaret shows in New York City nightspots, all under the moniker of the outrageous name they’ve given themselves: Gashole. Together, they have garnered many awards for their brilliant and tuneful brand of music and humor, including three years running as “Best NYC Club Act.”

Time Out New York described their act as “Karen Mack and Michael Holland’s gleefully goofy, shamelessly entertaining neo-lounge act. For five years, Mack and Holland have been resurrecting the lost art of the medley, with an emphasis on pop hits from the ’70s. The inventive Holland supplies the musical connective tissue on piano or guitar, as he and the supple-voiced Mack blend their vocals into surprising counterpoints and ornate, often lovely harmonies.”

Those old enough to sound out the following sentence supplied by the producers should be able to find much familiarity in the show: “Come sail away with us at this special, one-night-only concert event! Oh-ou-ah! Listen to the music!”

Cabaret in the Country is a series at the Philipstown Depot Theatre that strives to bring the very best of city cabaret to the Landing several times per year. Past productions include the sell-outs Sondheim Unplugged and Simply Streisand.