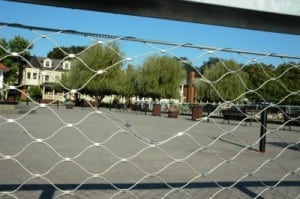 The second incident of sabotage involved a larger cut to a fence section. Photo by L.S. Armstrong

The focus of attention last Wednesday (Sept. 12) at the Village Board’s formal monthly meeting, the first attack occurred between late Friday, Sept. 7 and Monday evening, Sept. 10 and involved a small cut to a length of fence already in place. The second incident took place between approximately 1 p.m. Thursday (Sept. 13), when the architect who planned the dock improvements checked the fence, and 5 p.m., when a Philipstown.info reporter discovered a fresh, larger hole, in a partly installed section.

Designed to withstand lions and tigers and used at zoos as well as at the waterfront in Hoboken, N.J., and the High-Line Park elevated path in New York City, the new mesh railing replaces an old fence with widely-spaced bars that fails to meet current safety codes. The railing upgrade is part of the “Dark Skies” dock-improvement initiative to improve visibility while eliminating light pollution, a project underwritten by the Hudson Highlands Land Trust with funds raised in the community.

According to James Hartford, of Cold Spring-based River Architects, locations “a lot more challenging than ours” use identical fencing.  Hartford discussed the first wire-cutting incident with the Village Board on Wednesday. 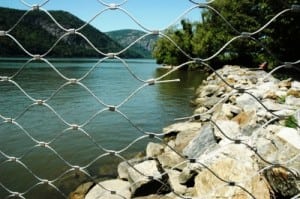 The first incident of sabotage involved a small cut to a fence section. Photo by L.S. Armstrong

After the discovery of the second incident, Hartford informed Trustee J. Ralph Falloon, who handles safety issues for the village. Falloon immediately called the Cold Spring police, who had likewise been notified of the first incident.

“I find it disturbing and immature that anyone would feel the need to cut the fencing, whatever their reason may be,” Falloon said Friday. “Also this could potentially cost the taxpayers in repairs. I also assume that it will cause the police to spend more time at or near the dock, keeping them from other parts of the village. And if the acts of vandalism keep up, there could potentially be additional resources added to the case — costing taxpayers even more money,” he said.

Falloon said that a police report of “criminal mischief” had been filed but that he did not know what the penalties might be for someone found guilty of the offense.

Mayor Seth Gallagher cited the irony of the situation. “It’s kind of sad that a fence like that can handle Hoboken and the High-Line” and run afoul of malice aforethought in placid Cold Spring, he said Saturday (Sept. 15). “I think that ultimately we’ll be able to control this kind of senseless vandalism,” which he likened to smashing windows with a hammer just to show that “yes, it can be done.”

Hartford said that the fence contains “a redundancy in the design that helps make it survive damage well” and that even if cut it remains sound, its strength unimpaired.

The fence became a topic of discussion at Wednesday’s board meeting when Falloon mentioned that a resident had raised questions about its effectiveness, prompting Falloon to examine it himself. “We were curious as to the integrity, strength, and durability of that fencing,” he said. “It looks a lot thinner, and it looks not as strong.” He asked if an engineer had approved it. 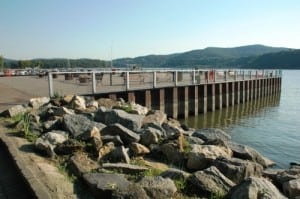 Gallagher deferred to Hartford, present in the audience, who responded that a village consulting engineer had indeed signed off on the fence. The “cable-net” employed “is very strong, and it’s flexible. It has the strength to withstand a considerable amount … thousands of pounds,” Hartford explained. “It meets code,” whereas the old fence “didn’t meet code.” The new railing “is absolutely strong enough, provided people don’t cut it with wire cutters,” he said.

Hartford discounted the possibility that the fence could have arrived with the first, smaller cut in it. “It wasn’t shipped that way,” he said. He noted that the mesh had been checked by hand as it was put in place and that the gash also did not result from a mishap in installation. “Someone cut it,” he emphasized. “Somebody broke the law to do that. There are ways you can ruin something to demonstrate someone’s point. But what they’ve done is completely wrong.”

The mayor said that all local police officers have been instructed “to be on the lookout” to prevent any further attacks. The sabotage aside, “we are getting very close to the railing completion down there,” he observed. “The next step would be to do the wood rail on top. It’s a project that I think is a good one, along with the lighting.”

See the Sept. 14 issue of The Paper for additional coverage of the fence installation.