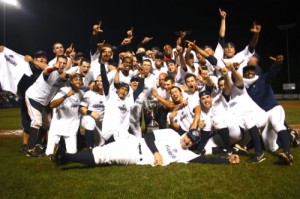 The Hudson Valley Renegades ended their 2012 season in style on Sept. 13 (Thursday) winning the single “A” New York-Penn League Championship before more than 3,600 fans at Dutchess Stadium. “The Gades” defeated the Tri-City Valley Cats 8-3 to earn their first championship since 1999 — the year that slugger Josh Hamilton, now a standout with the America League’s Texas Rangers, graced their lineup.

Tri-City won the first game of the championship round but HudsonValley roared back to take the three-game series with two straight wins. It was a familiar script for the Renegades who lost the opening game of the first round to the Brooklyn Cyclones before putting together back to back wins to move on the championship.

In a game that featured a total of 14 pitchers, Chesnee, South Carolina native Brandon Henderson came out the winner, pitching two scoreless innings while allowing just one walk and striking out four strikeouts as the Renegades claimed the title. They never trailed in the game.

It was a fitting end to a season that saw Hudson Valley record a franchise record 52 wins. Local baseball fans looking to capture a piece of regional baseball history can purchase a Hudson Valley Renegades championship t-shirt at the team’s store at Dutchess Stadium. To learn more about the Renegades, read A Night at the Ball Park, which was published in The Paper and on philipstown.info in August.