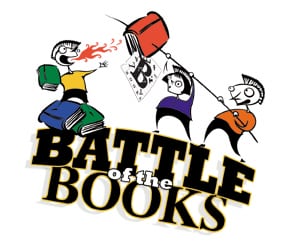 On Saturday, Sept. 8th, 11 students from Haldane Middle School traveled north to Arlington High School in LaGrange, N.Y. to compete in the eighth annual Battle of the Books competition against 24 libraries from the Mid-Hudson Library System.

The Battle of the Books is a national summer reading program for middle-school students that requires participants to read eight books during the spring and summer and then compete in trivia battles based on the titles. The program aims to introduce children to books and authors they might not otherwise encounter and to allow students to experience good sportsmanship and friendly competition.

Butterfield’s team met weekly since February to read, discuss and quiz themselves with practice questions based on the books. Through a generous gift from the Friends of the Butterfield Library, the library was able to purchase a buzzer system similar to the ones used in the regional battle. (The Friends also subsidized many of the program expenses.)

“Often, it comes down to who can buzz in the fastest, so it is necessary to practice with the buzzer system,” says Maureen McGrath, who was co-coach with Johanna Reinhardt. The team also participated in several practice battles with Patterson, Kent, Beacon, and East Fishkill libraries during July and August.

The members of “Julia’s Been Matched” were unquestionably disappointed that they didn’t place in the regional battle but showed maturity and courage throughout the competition against approximately 200 other students.

Jennifer Sandlund, mother of Reva, commented, “I especially think the camaraderie and joint love of books was inspiring to Reva.” Indeed, Mike Nyerges, executive director of the Mid-Hudson Library System, captured the spirit of the day when he told the competitors that they were all winners because they spent the summer reading!

Reviews by the team members of the 2012 titles appear on philipstown.info and these eight books, as well as titles from previous years, can be found to check out on the Butterfield Library’s Battle of the Books shelf.