The Haldane Board of Education passed a number of resolutions at its Sept. 18 (Tuesday) meeting, officially setting the wheels in motion that will move the school district closer to a major renovation of the main sports field on campus.

Funding for improvements to Haldane’s main sports field will come from a variety of sources. School Board trustees have pledged that the project will not increase taxes. M. Turton photo

If approved by voters in November, the $2 million project will include the installation of a new artificial turf field to accommodate football, soccer and lacrosse as well as physical education programs. In addition, a three-lane track will serve as a practice facility and a community walking area. Lockers that go back to the 1960s will be replaced, and improvements to the auditorium will also be carried out as part of the project.

The project is eligible for aid from the New York State Department of Education, to the tune of about 34 percent of the total cost. Haldane trustees have pledged that the project will not increase taxes. They passed five resolutions on Tuesday, setting the stage for a public vote later in the fall.

The first resolution approved was a formality, designating Haldane Central School District as lead agency in implementing the fields project. Other local government bodies had been polled as required by law, however, not surprisingly, none showed interest in leading the initiative.

Next, the New York State Environmental Quality Review (SEQR) declaration was approved, in essence stating that the project will not result in any adverse environmental impacts. Superintendent of Schools Mark Villanti acknowledged that some neighbors below the main sports field had expressed concern regarding storm-water runoff. “I think we’ll actually have better drainage (as a result of the project),” Villanti said. “We’ve been very open with the public,” he said, and commenting that as with recent improvements to the baseball fields along Route 9D, letters will be sent to all property owners regarding the storm-water management aspects of the project. 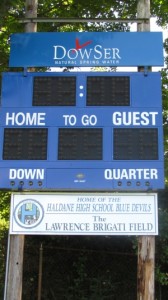 Lawrence Brigati Field, home of the Haldane Blue Devils, will see major improvements if a $2 million project is approved by voters in November. M. Turton pho

At a previous meeting, the consultant designing the project indicated that improved drainage would result from the track being made of the same turf material as the sports field.

The third resolution passed came about as a result of a suggestion by trustee Peter Henderson at a previous meeting. Henderson was concerned that if the formal referendum to which voters will say “yes” or “no” in November were written in legal terms, the meaning might not be clear to the average voter.

As a result, trustees passed a “plain English” resolution, outlining the makeup of the project that residents will vote on, and how it will be funded. The resolution states that the project will be funded 34 percent from state aid, $600,000 from existing capital reserves, $300,000 from the district’s endowment fund; $200,000 from a community fundraising effort called “PLAY Haldane” as well as from funds from the sale of 10 acres of land known as the James Pond property, which has been valued at between $425,000 and $500,000. If approved, the referendum authorizes the district to sell that property.

After a fourth resolution was passed establishing Nov. 13 as the date on which the referendum will be held, trustees approved a fifth — the formal wording of the referendum as determined by bond and legal counsel. Henderson’s concerns seem to have been well founded.

The legalistic verbiage of the actual referendum resolution states that after use of the capital reserves, monies from the endowment fund and sale of the James Pond property, the balance of project costs “shall be raised by the levy of a tax upon the property of said School District and collected in annual installments as provided by Section 416 of the Education law; and in anticipation of such tax, obligations of said School District shall be issued.” That does not mean a tax increase. Villanti explained that what it means in plain English is that until the district receives its 34 percent in state aid, it will borrow the money to complete the project. “The state doesn’t just give you a check (upfront),” he said. “You have to borrow, then they pay.”

Installation of artificial turf will allow Haldane’s main athletic field to be used for football, soccer and lacrosse as well as for physical education programs. A three-lane track will also be added around the field. M. Turton photo

Both Villanti and School Board President Michale Junjulas acknowledged the confusing nature of the legal language, Villanti stating that it has been that way through numerous projects throughout his career as a superintendent. “That’s why Peter (Henderson) suggested the plain English ‘intent’ resolution, so that people could understand what it (the formal referendum) means,” Junjulas said.

Trustee Evan Schwartz feels that voter turnout will be a key factor in the referendum. “We’ve done a great job of informing people,” he said. “Now we have to really get out the vote. People think it’s a done deal.” Schwartz recalled one budget vote that was defeated the first time it went to voters. “We dropped the ball,” he said, by taking a “yes” vote for granted.

The Putnam and Northern-Westchester BOCES (Boards of Cooperative Educational Services) located in Yorktown Heights finds itself in a situation not unlike what Haldane Central School District faced a few short years ago. It has aging facilities in serious need of repair and upgrading and has to raise the money to do the work. Haldane currently has 21 students attending BOCES, which offers a myriad of vocational, career-oriented programs.

BOCES is funded by 18 school districts including Haldane. Spending for any capital improvements must be approved by unanimous vote of those districts, because they foot the bill. Earlier this year a proposed project totaling $19,050,000 was rejected. At Tuesday’s meeting, BOCES representatives were on hand, outlining a revised project that has been trimmed by about $2 million. Work would include repairs to badly leaking roofs; replacement of heating, venting and air conditioning (HVAC) units; a redesigned pool used for physical therapy; and replacement of fire alarm and PA systems. All districts will vote on the revised project on Oct. 9.

Districts fund BOCES proportionately with Haldane’s share of the proposed capital project assessed at 1.62 percent of the total cost, or $250,198 spread over three years. In contrast, Bedford School District would pay 11 percent of the project cost, or $1.7 million. Those expenditures must be counted as districts struggle to stay within the 2 percent tax cap imposed by the state of New York.

Haldane trustees will discuss the funding request at a future meeting and seem to lean strongly towards supporting the revised spending plan. Their discussions are more likely to center around how to finance Haldane’s share than the project components themselves. Junjulas was effusive in his praise of BOCES and what it offers students. “BOCES is not for the kid who can’t handle school,” he said. “What they offer is amazing. They offer so much. Coming out of high school, in this bad economy, I’d go with what they have.”

Trustees took a brief timeout to thank three community organizations that contribute to life at Haldane on a regular basis — the Parent Teach Association, the Blue Devils Booster Club, and the Haldane Foundation. Representatives of each organization were presented with certificates of appreciation.

Ranks were thin at the meeting. Villanti and Junjulas considered canceling it because of severe weather that day. A number of administrators who are normally on hand did not attend, some due to power outages at home.

One thought on “Haldane Moves Forward With Field Improvement Details”