Guillaro only willing to use 1925 core

In a session that produced both progress and another impasse, Cold Spring’s Historic District Review Board (HDRB) Wednesday night informally agreed — if in one case reluctantly — that the 1963 portion of the old Butterfield Hospital can be demolished. But in a workshop session with property developer Paul Guillaro, the board split on whether the hospital’s 1941 wing could likewise be torn down: Two members voted “no” in an unofficial tally, two said “yes,” and the fifth was uncertain.

An old back wall remains from the 1925 building. Photo by L.S. Armstrong

All agreed that the original 1925 hospital core merits saving — and Guillaro concurred. Nonetheless, the apparent common ground on that score produced no happy ending, as Guillaro balked at demands he save the 1941 construction as well.

Reportedly built 1922-1925, the hospital initially consisted of a stand-alone, three-story edifice in a classical, Georgian colonial American style. Expansions in 1941 and 1963, especially the latter, a modernistic wrap-around, largely destroyed the look of the original building, but a remaining section of back wall attests to its stateliness.

During the straw poll, HDRB Chairman Al Zgolinski, who had earlier advocated saving the entire hospital, said he would relinquish the 1963 section while insisting on retention of both the 1941 and 1925 elements. HDRB Member Kathleen Foley also opted for keeping the parts from both 1941 and 1925.  Their colleagues Marie Early and Peter Downey voted to save only the 1925 core. Member Carolyn Bachan remained non-committal.

Guillaro said the board left him with a stark choice: “Keep the ’25 and ’41 [components] or complete demolition.” He declined an offer of further workshops with the HDRB and intends to meet with the Cold Spring Village Board on Tuesday (Sept. 25). “And I think I’ll have a position by that time.” All along, he has called for demolition of the entire hospital.

“Why is the burden on Mr. Guillaro to convince us?”Early wondered.

The extent, or lack, of the building’s historical significance figured in a debate at a joint Village Board and HDRB meeting on Tuesday. [See: HDRB Challenges Mayor, Attorney on Butterfield.]

At the onset of Wednesday’s session, Guillaro, of Butterfield Realty LLC, the site’s owner, announced his willingness to re-use the 1925 building if Putnam County, the Town of Philipstown, and the Cold Spring village government endorse the effort, which could entail higher rents than they had foreseen as occupants of a brand new intergovernmental headquarters at Butterfield. From his perspective, “It’s going to be significantly more money than building new, but it’s an option,” Guillaro informed the board.

In saving the 1925 original structure, “the concept would be to restore the building, put it back the way it was. I think it makes sense to keep it and try. Let’s try to work with the ’25 and forget the ‘41” component, Guillaro said. “The more I keep” of the hospital, “the more the plan is of a disadvantage to me. I need to move this process along. The least amount of building we keep, the better it’s going to be for the overall project.”

Foley said that the 1941 wing might become desirable space and remained unconvinced it is unfeasible. 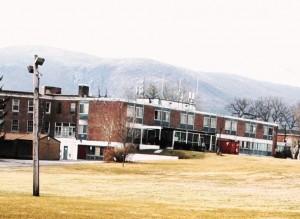 The 1963 extension wrapped around earlier parts of Butterfield Hospital. Photo by L.S. Armstrong

Bachan told Guillaro, “I think the municipalities would be willing to go to the mat for you with the right plan,” one that could utilize the 1941 wing as well as the original building. “I love shaking down politicians,” she quipped. In a more serious vein, she also proposed the project could be viewed partly as an economic development engine for the area, not simply a redevelopment scheme.

Several times over the course of the evening, Downey described Guillaro’s re-use of just the 1925 building as a viable solution. “I think it’s a good compromise. I’d hate to shoot ourselves in the foot” by seeking too much, he said. As the board’s views split and support emerged for keeping more than the original 1925 hospital, Downey warned, “I think we’re losing our compromise.”

Zgolinski, though, said “giving up the ’63 [section] is a big compromise on our part” and that it would be more beneficial to Guillaro to keep the 1941 wing along with the 1925 core than to rebuild the latter as a self-contained structure. At one stage he informed Guillaro, “I’m skeptical. I haven’t gotten to the point where I’m calling you a liar, but I’m skeptical. Realistically … work with us” on wider-ranging possibilities, he advised. “That’s all we’re asking you to do, explore the options.”

Her differences with Guillaro’s notwithstanding, Foley assured the developer of the board’s appreciation for his cooperation, noting that after an inconclusive meeting two weeks earlier he had returned with ideas for retaining the 1925 building. “I know everyone is grateful to you for coming back to the table and having this option with you,” she said.