Every second Tuesday of the month, local musicians with their fiddles, banjos, guitars, mandolins, dulcimers and basses meet at the Howland Cultural Center in Beacon to play old-time music, often simply called old-timey. The sessions, which are open to the public, start at 7 and run until 10 p.m. The participants are at all levels of musical ability, including beginners hoping to learn some old-time fiddle tunes, as well as accomplished fiddle teachers and experts. 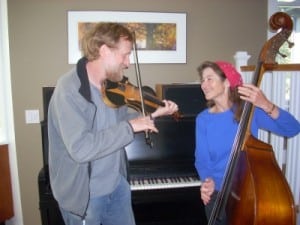 Harry Bolick, of Hopewell Junction, began holding the sessions at the Howland Center this spring, hoping to build community among existing and aspiring old-time musicians in the area. An expert on Mississippi fiddling and a performer on eight recordings, Bolick also teaches an old-timey fiddle, cello and mandolin class at the Garrison Art Center, which meets as a four-class series on Thursdays from 7 to 8:30 p.m.

In addition to the Beacon sessions, he still attends a Brooklyn session he started three years ago, which meets twice a month, as well as many other local sessions. One of these meets every first Friday of the month at Hanover Hilltop Farm in Yorktown Heights. At the New World Café in Saugerties, Jay Ungar, of “Ashokan Farewell” fame, leads a session on the first Wednesday of every month.

Old-timey is an old form of North American folk music, derived from European (fiddle) and African (banjo) traditions and developed in Appalachia and the South. Many of the tunes can accompany square and contra dancing, or even clogging; others are ballads. Old-timey experienced a revival around the 1950s, especially through the performances of the New Lost City Ramblers, two of whose three members included the late Mike Seeger (half-brother of local resident and folk musician Pete Seeger) and musicologist John Cohen, who also resides locally.

Bluegrass, which has also experienced a revival recently, developed from old-time music but differs from old-timey in important ways. Bolick explained that bluegrass is primarily a concert form, with performers improvising in virtuosic solos. In old-timey, however, everyone plays together, either iterating the melody or accompanying it, through as many repetitions as the group or leader wishes to take.

To Bolick, the group performance of old-time music is what makes it special in our age of solitary activity and lends itself particularly well to the goal of building community. “It’s giving back to the community,” he said, calling it a selfless act of connecting to others rather than one focused on a great, formal musical experience.

To emphasize this point, he quoted a local man who ran an open mic night in the area: “You know, people make a lot of fun of these open mic nights, but they’re all at home watching TV.” For those who crave a connection to others through playing music as it was done in the old days, an old-time jam session can provide the opportunity to make friendships as well as keep an important American tradition alive.

Bolick’s goal of community building suits the venue of the session perfectly, since the mission of the Howland Center is to serve as a cultural resource for the community. Bolick also appreciates the center for its quiet atmosphere, which allows for better listening, and therefore learning, than a bar or restaurant would.

At the Howland Center sessions, Bolick facilitates the jam by announcing a key in which to play — one of the four most common keys for old-time music: C, G, D or A. Often, a fiddle leads by stating the melody of a tune alone, with others joining in once they are familiar with it. Guitars and banjos often provide accompaniment, while Pat Schories, Bolick’s wife, sets the rhythm on an upright bass.

When the group or leader wants to end the tune, he or she lifts a leg or gives a shout to signal the last repeat. After playing some tunes in that key, they move on to another one. The reason for staying in one key for some time is that banjos may be tuned in a particular key, and moving frequently among different keys would require too much time retuning.

Most of the tunes, as in most folk music, only use the I, IV and V chords, which makes accompanying the tunes easier for those who haven’t yet memorized the melodies of the standard old-time tunes. Nonetheless, some background in music and ear training would help a beginner to the genre — knowledge of chords and triads or familiarity with learning tunes by ear would prevent frustration while playing in a session.

For those who enjoy listening to old-time music, the Howland Center will also hold a concert of old-time fiddle and banjo music at 7:30 p.m. on Oct. 12, featuring Pat Conte, whom Bolick calls an authority on old-timey and blues. Bolick will also play at the concert, performing duets with Brian Slattery. Tickets cost $15.

Those who love to dance will have the opportunity to do so in the winter, when the Howland Center plans to present a square dance with a live performance of old-time music.

For more information about Bolick and old-time music, visit his website at harrybolick.com.