‘I’d call us warm, friendly and welcoming; the tone is happy’

The simply and perfectly named Community Nursery School and Learning Center has been going strong in the Philipstown community since its founding in 1968. As more women entered the workforce during that decade of changes, the need for a preschool became apparent to Community’s founder, Marie Rohrberg. 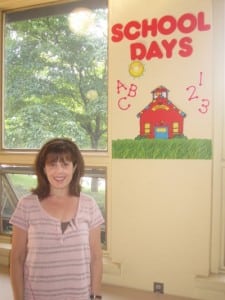 What started out as a pilot program took off from the first day, according to Community’s current director, Rosemary Rodino, who has been at the welcoming premises located within the First Presbyterian Church on Academy Street in Cold Spring for 26 years now. Rodino says she still “feels that same excitement and challenge every morning when I walk through the door. Every class has its own uniqueness, so there’s always something new.”

What began as a 2 1/2-hour program three days a week has morphed into 3-hour-long sessions four days a week, though children can attend any number of the four days. The school year runs from September through June.  At one point Community offered a separate afternoon session, but this has been discontinued.

When children — who range in age from 2 1/2 to 5 — enter each morning, it is called “receiving time,” and all children have the freedom to roam between the two classrooms that constitute Community’s space within the church. In those rooms they will find a multitude of activities: water play, sand tables, easel painting, geography, science, singing, coloring, cutting, ABCs and 123s, painting, exploring, baking, stories and more.

If any particular activity shows signs of not working, “We’re flexible,” says Rodino, “we’ll put it away and try it again another day.” The children are divided into two age groups, the “threes” and the pre-K class.

Beyond all of these options, says Rodino, is a philosophy, and that is to respect childhood and nurture these young children. “This defines us and our role as teachers,” she states, adding, “Our job is to give them the best possible preschool experience.” Although kindergarten readiness is ever more important, with “kindergarten now more like first grade,” according to Rodino, “if our sole purpose is just to prepare them for kindergarten we’ve missed part of what’s important.”

Notes given to parents describe Community as striving to be “a place where children are encouraged to learn, play and socialize in an environment that understands how essential play is to learning and building social skills. There is quite a unique and special balance between nurturing and teaching that occurs once your child walks through the doors of CNS, and it is a style that we as early childhood educators celebrate.”

Rodino says that preschool education has changed so much over the past several years, but that “children have evolved with it; they’re meeting more challenges.” 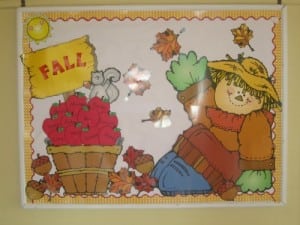 A seasonal wall welcome at Community. Photo by A. Rooney

The children venture outside each day, weather permitting. There is a small outdoor playground on the church grounds, and lots of walks are taken, as well as visits to places like Glynwood Farm. The community also comes to visit Community, sharing their talents. Among others, local children’s book author Jean Marzollo stops by to read to the children, and “Farmer Curtis” of Homestead Farms visits from time to time.

As the school has now been open for over 40 years, multiple generations of Philipstowners have attended, with the comment, “A few years back my husband was your student,” not as rare as it used to be. Many of the staff have stayed at Community for years, or, as Rodino puts it, “Wonderful women have come and gone, but the core remains the same. They all bring something special with them to Community. One of our teachers, Terry Scozzafava, was here for 16 years.”

Current teachers Debbie Pidala and Tricia Junjulas have worked there for 15 years each, and Jessica Valenti is now in her third year there.

Rodino herself moved to this area from Michigan in 1982. She was hired by Mrs. Rohrberg, worked a year, then left to have her own children (both of whom attended Community, naturally). At the urging of Mrs. Rohrberg she returned to Community after a few years, and took over as director in 1986. “It’s given me an opportunity to meet so many wonderful families that have become part of my life as friends,” she says.

The school has seen many sets of twins, and part of this year’s crew is a set of boy triplets. The school has seen a rise in working moms through the years, although Rodino is quick to note that with their limited hours, they are not a daycare center, so the majority of moms are of the stay-at-home variety and see Community as giving their children social interaction and activities not possible at home.

The school, which has no religious affiliation, has nonetheless been welcomed by First Presbyterian since its inception. “We’ve enjoyed a great deal of support from them,” says Rodino, adding, “We certainly have had the support of Rev. Leslie Mott [the current pastor] and so many ministers before her, and of the church community too, even though the program itself is independent of the church.”

Community welcomes visitors all year long; there is an open-door policy. Enrollment takes place whenever there are openings — there are currently a few — throughout the school year. Children need to be “self-sufficient” in the bathroom in order to attend. “Come in and see if we’re a good fit for you and your child,” says Rodino. Still, not everything is immediately visible: “There are so many moments that make up part of our day that parents do get to see. Millions of moments turn into something special that we share with their children.”

This article is the start of a series on each of Philipstown’s preschool providers.