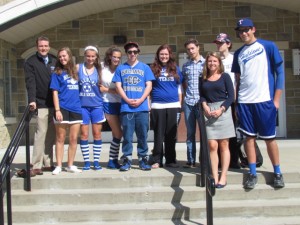 Haldane High School recently acknowledged those students who earned Advanced Placement (AP) Scholar Awards in recognition of their exceptional achievement on AP Exams. They described the designations as follows:

“The AP Program offers several AP Scholar Award Levels to recognize high school students who have demonstrated college-level achievement through AP courses and exams. Although there is no monetary award, in addition to receiving an award certificate, this achievement is acknowledged on any AP score report that is sent to colleges the following fall.”

AP Scholar With Honor — Granted to students who receive an average score of at least 3.25 on all AP Exams taken, and scores of 3 or higher on four or more of these exams. Class of 2013: Malinda Labriola, Carolyn Schaefer, Stephen Zalys. Class of 2012: Salvatore Baisley, Jessica Gore.

AP Scholar With Distinction — Granted to students who receive an average score of at least 3.5 on all AP Exams taken, and scores of 3 or higher on five or more these exams. Class of 2012: Jacquelyn Ferguson, Cal Lane, James Olsen.