These days running for Congress is not for the faint-hearted, especially when a race is seen as competitive. With candidates seeking to define themselves, often in sharp contrast to their opponents, supported by millions of dollars directly or through political action committees, the game can get rough. 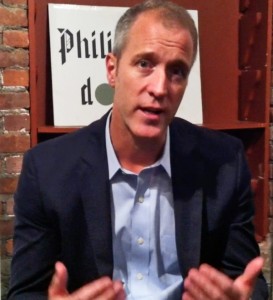 Such is the case in the 18th District, which includes Philipstown, as Sean Patrick Maloney, Democrat and Working Families candidate, takes on Rep. Nan Hayworth, the one-term incumbent Republican and conservative-line candidate.

The race has assumed national importance as the Democrats believe Maloney can win the seat back for their party, while the Republicans are convinced Hayworth can win again (helping hold their majority in the House) despite demographic changes that appear to increase the Democratic voters in the district.

“Carpetbagger” is the name Sean Maloney most often hears these days from his opponent through a steady stream of television commercials. It is an old invective that draws its source from the post-Civil War days when northern speculators and opportunists were rampant across the southern states.

Maloney, now a Cold Spring-area resident, shrugs off the charge made in the same year the district lines were actually drawn. “When you have a terrible record you respond by calling me names. People can tell it’s a way to way to distract attention from voting against ending tax cuts for multimillionaires to pay for Medicare,” said Maloney, who requires little prompting to launch into a critique of Hayworth’s voting record, which he insisted does not represent the values or the interest of a majority of voters in the district.

“She’s the most conservative member of the New York [congressional] delegation. She’s drunk on Tea Party Kool-Aid.” He points out that her advertising doesn’t mention such associations now, “but facts are stubborn things. She voted twice to end Medicare as we know it. She voted to de-fund Planned Parenthood. She voted for an $11 billion cut to veteran’s benefits.”

Maloney believes Hayworth’s record on women’s rights, especially healthcare, makes her particularly vulnerable if voters, especially women, look beyond her gender and her career as an ophthalmologist. “She thinks your employer should decide if you get contraception. She voted against services such as cancer screenings and prenatal care that generations of women have benefitted from.”

While Maloney underscores his commitment to social programs (Medicare, Social Security) and education (assistance with college loans and aid to community colleges for adult skills training), he also speaks of the importance of government’s role as a partner with regional businesses to create opportunities and jobs.

He cites the plight of businessman Jeff Taylor in Montgomery, N.Y. with a biomass renewable-energy project ready to go with $45 million privately invested. According to Maloney the business could generate 20 megawatts of power, has a long-term purchasing agreement offer from the Port Authority to supply Stewart Airport, and would create 300 construction jobs and 82 permanent positions.

The problem is the need for a federal loan guarantee to secure private financing. From Maloney’s perspective, helping work with the U.S. Department of Energy to make the deal happen is central to the role of a congressional representative.

“Hayworth doesn’t want to help him. She doesn’t believe in it, doesn’t see it as a role for her. I believe government has to be a partner for people like Jim Taylor,” said Maloney.

Continuing with his theme of activist representative, business supporter, and job creator, Maloney said if elected he would look to work with the governor, the two U.S. senators, and the Port Authority to establish a regional food distribution hub at or near Stewart Airport to provide farmers with greater market access via air and rail lines. “Such a project would help Newburgh and the farmers and the regional economy,” he said.

He also said he thought an incubator project to encourage entrepreneurs in the food and beverage business was also possible in the same area, potentially giving rise to distilleries, creation of specialty crops, and development of new menus and eventually new business models. “I believe it’s critical to have a quarterback to pull people together; you have to want to do it,” said Maloney.

Maloney compared his perspective on the job of congressional representative to what he said was “the Tea Party ideology [of Hayworth] that says we’re all on our own.”

Although Hayworth has a television commercial mocking Maloney’s political associations and experience, he wears it proudly, having served as a senior aide to both Governors Spitzer and Paterson. He recalled in particular that he worked on the Paterson effort to increase state aid to education and that it was the last time such a successful effort was made.

But the role he likes to speak about most about is his service as White House staff secretary under President Bill Clinton. Maloney said his duties, including having to read most of what went to the president’s desk, gave him a sense of the gravity and complexity of both domestic and national security issues and prepared him well for representing a district in Congress.

He said he took much from the Clinton approach to doing what was necessary to balance the federal budget equitably, while maintaining government programs that support infrastructure, healthcare, education, as well as the country’s defense.

“We need to look at what works, like asking the wealthy to pay their fair share like we did in the 1990s, when Republicans said we would destroy jobs and the sky is going to fall. And what happened? We created 23 million new jobs. We had the longest economic expansion in American history. We created 800,000 jobs just in New York. And we ran a surplus,” said Maloney.