The Haldane Blue Devils football team lost a close game on Saturday to the visiting Bronxville Broncos 20-14. The game started off well for the Blue Devils with an interception by safety Bayley Semple on the Broncos’ first possession, but both teams failed to capitalize on turnovers, and the first quarter ended scoreless.

On the first play of the second quarter, Semple, also quarterback, completed a 34-yard touchdown pass to Nick DiGregario, putting the Devils up 6-0 as they missed the extra point. Later in the quarter, the Broncos’ special teams blocked a punt in Haldane’s end zone, and with the extra point the visitors were up 7-6.

Bronxville would add on another touchdown later in the half on a long-pass play, taking a 14-6 lead at the midway point. 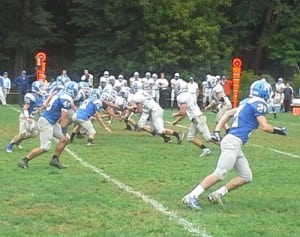 After two Bronco field goals in the second half, Haldane found themselves down 20-6 with only 6 minutes and 43 seconds left to play. The Blue Devils answered with their most impressive drive of the day marching the ball down the field. Led by running back Will Moss, the home team rallied off five quick first downs using a no-huddle offense. The 72-yard drive was capped off by two quarterback sneaks from Semple netting Haldane a 6-yard touchdown and a successful two-point conversion.

Down 20-14 with only 3:51 on the clock, Haldane attempted an onside kick. Owen Thomas laced the ball perfectly through the Broncos kick returners, and the Blue Devils recovered the ball in Bronxville territory.

Haldane continued their impressive running attack to move the ball downfield. With 1:55 remaining, facing a fourth down from the Bronco’s 20-yard line, quarterback Semple dropped back to pass. Lofting a beautiful spiral towards an open Nick DiGregario in the endzone, the Blue Devils’ hopes of an incredible comeback were ended as a Bronxville defender tipped the pass away at the last second.

The Blue Devils would get one more shot with 35 seconds left in the game. The Broncos’ secondary proved too resolute though, as they pulled in their fourth interception of the game to seal the victory.