The Sunset Reading Series continues at the Chapel of Our Lady Restoration in Cold Spring this Sunday, Oct. 7 at 4 p.m. with poet Jeffrey McDaniel and Joan As Police Woman reading and performing. 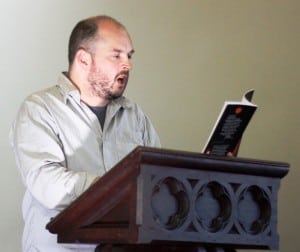 Jeffrey McDaniel is the author of four books of poetry, most recently The Endarkenment (University of Pittsburgh Press). His fifth book, Chapel of Inadvertent Joy, is coming out in 2013 from Pitt Press. Individual poems have appeared in dozens of magazines and anthologies, including Best American Poetry 1994 and 2010, Ploughshares and American Poetry Review. He is a professor of creative writing at Sarah Lawrence and a recipient of a fellowship from the National Endowment for the Arts.

Joan Wasser, also known as Joan As Police Woman, was born in Maine, adopted at infancy and raised with her adopted brother in Connecticut before joining New York’s art/music fraternity. Wasser started distorting the pure tones of her classically trained violin through massive speakers, amid the roaring sound of her formative band years in The Dambuilders, Black Beetle and Those Bastard Souls. “Anger only arises from other feelings that you’re not dealing with,” Joan said in 2006. “I’m trying to get deeper.”

She’d already got broader by playing in Antony’s Johnsons and Rufus Wainwright’s band, and being bandleader for musical director Hal Willner’s projects, from his Sea Shanties album to the Neil Young tribute (which was performed again at February’s Vancouver Olympics concert). But Joan’s own music has taken center stage, with its glowing, sultry pulse, but always with a palpable tension and turbulence beneath the apparent serenity. 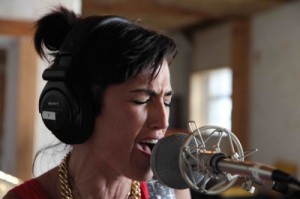 Joan As Police Woman will perform as part of the Sunset Reading Series on Oct. 7. Photo from joanaspolicewoman.com

Real Life was a soulful, torchy universe that aligned her with the likes of Annette Peacock, PJ Harvey, and Laura Nyro, but also the soulful glow of Al Green. The debut made The Word magazine’s Best Albums of the Naughties among other accolades and was followed up by 2008’s To Survive, which began the process of digging deep to the place where The Deep Field, her latest album, starts.

“I Was Everyone” closes that album on an ecstatic high, which makes sense given the inspiration was Joan of Arc, Wasser’s namesake. It’s sung from Joan of Arc’s perspective, of the self-doubt and self-worth she experienced when receiving visions. As the music reaches boiling point, the lyrics nail the same core as “Human Condition”; “What if I woke up tomorrow not afraid? / I could decide to trust the voices and take courage … For a moment I could feel it / I could feel it / For a moment I was everyone who had never been quiet / How would I spend my whole life?”

“This idea is very important to me,” Joan concludes. “What if Rosa Parks hadn’t spoken up? What if people didn’t say what they thought?  I have to trust myself. It’s a song about honoring oneself.”