‘A Half-Century Project of Imagination’

Jerry’s Map, the century-long creative masterpiece of local artist Jerry Gretzinger, will be displayed in its entirety for the first time at the Hunter Center at the Massachusetts Museum of Contemporary Art (MASS MoCA) in North Adams, Mass., beginning Friday, Oct. 5 and continuing through Oct. 14.

Gretzinger and his wife, the artist and clothing designer Meg Staley, have been part of the Cold Spring community for years. They left SoHo several decades ago to raise their family in the Hudson Valley and have lived and worked here ever since, eventually moving their business north, too, and opening the Staley/Gretzinger clothing store on Main Street. (Art to Wear continues to sell pieces from their collection.) The couple has since left the retail world behind but remain connected to the art scene in Philipstown. 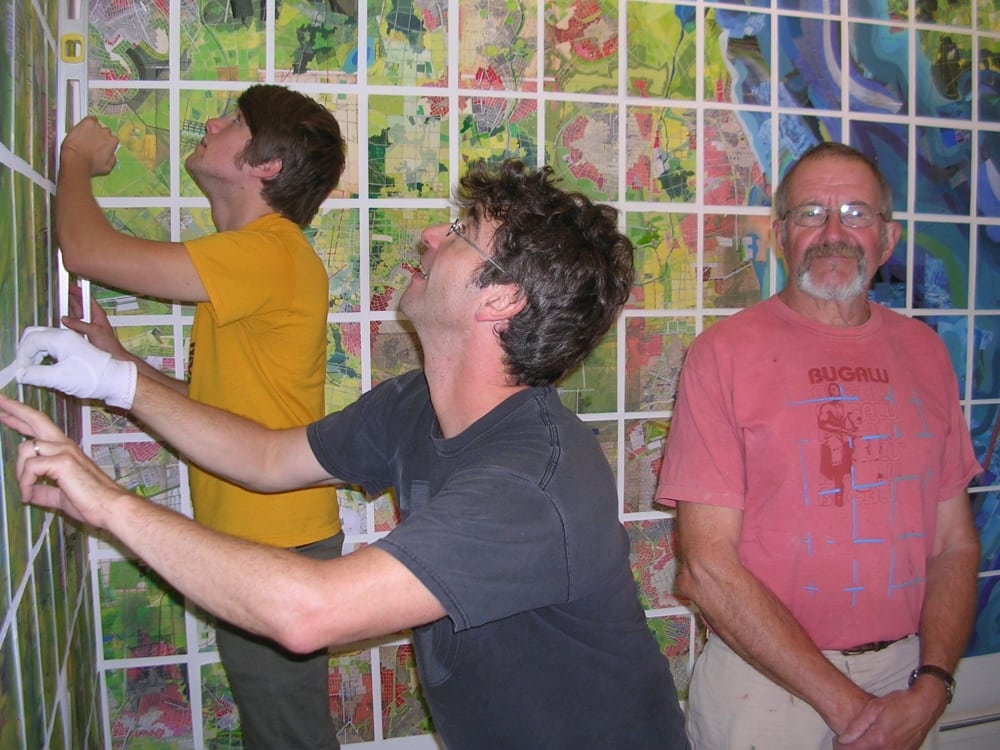 Lucky Gretzinger, left, Thomas Huber and Jerry Gretzinger at the exhibit of ‘Jerry’s Map’ at the Garrison Art Center in 2009. Photo courtesy of GAC

In 2009, the Garrison Art Center (GAC) was one of the first sites to exhibit a partial installation of Jerry’s Map. Carinda Swann, GAC executive director, fondly remembers meeting Jerry. “When I first became director here at the Art Center,” Swaan said, “I had the good fortune to find Jerry Gretzinger at the door one glorious morning with a world of art precariously clutched under his arm. When he spread it out before me that day, it became instantly evident that this extraordinary fantasy map had to be seen.”

Seen it has been, indeed. With the help of the Internet, word of mouth and the efforts of filmmaker Greg Whitmore, thousands of folks have had the opportunity to view Gretzinger’s work — and story — online. A short film featuring Gretzinger and his map was posted to Vimeo two years ago and has garnered more than 50,000 hits. Gretzinger has also been featured on many websites including The Atlantic, Oprah.com, Open Culture, and Mother Nature Network. Reddit users have generated several dozens of threads of conversation about the project.

The massive scope of the project is, in itself, enough to produce buzz in the art community — the hand-crafted, mixed-media piece (which began as a penciled doodle of a single town on a single tile) has grown to nearly 2,700 panels that, when assembled, span an astonishing 2,000 square feet. It’s the story behind its creation and the meticulous way it has been molded and maintained, however, that keeps admirers connected to the ongoing enterprise.

Construction of the map, much like the aesthetic of the piece itself, has been executed in bursts and rushes of time and toil. Gretzinger said that he worked steadily on the tiles from 1963 to the mid-’80s when, as the father of young children living in SoHo and running his own textile company, the business and distraction of life and parenthood caused him to put the project away for nearly two decades. 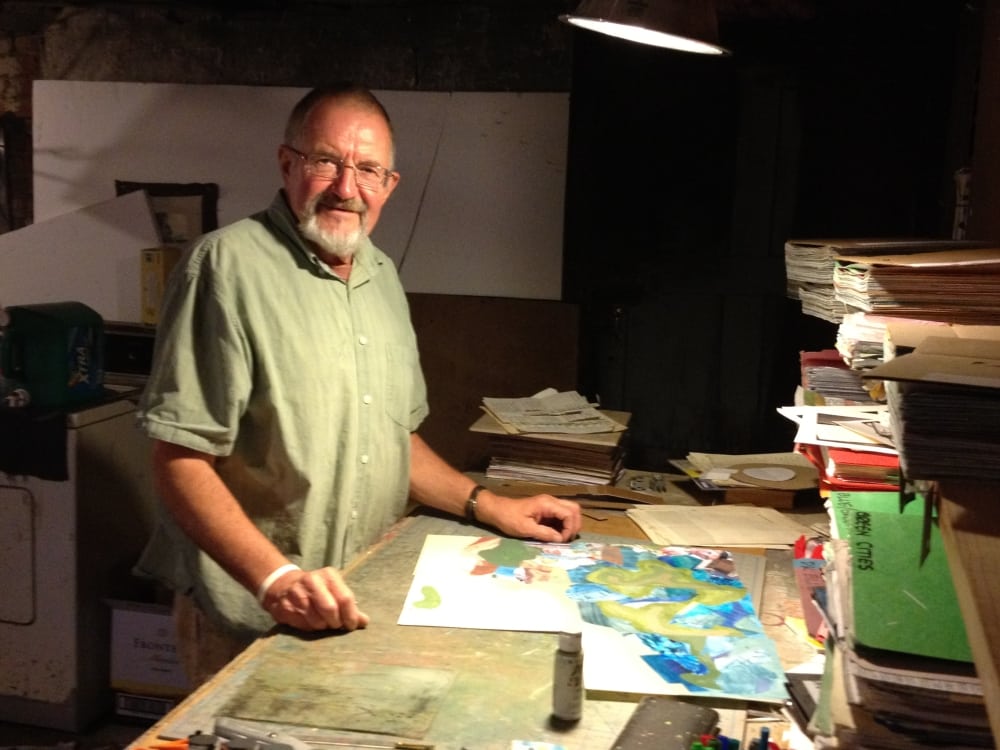 Gretzinger in his Cold Spring studio. Photo by C. Simek

One day, sometime in 2003, Gretzinger’s then-adolescent son was poking around in the attic of their home in Cold Spring and stumbled upon a dusty box that contained the project. According to Gretzinger, his son brought it to him and asked if he could keep the contents, “and I said ‘Oh, look! It’s my map…’” he laughed. “And no, you can’t have it! But that just triggered something in me to want to get back at it.”

Since then, the process of how the panels are created has been completely re-imagined, and Gretzinger’s daily work on the project is now influenced by an elaborate system he established to ensure that an inventive nature is maintained as the map’s perimeter continues to expand. Each day he pulls from a deck of modified playing cards to determine that day’s focus. The instruction on the card might prescribe Gretzinger to draw new territory, rework an existing section or establish something he calls ‘the void’ — an action he takes to completely erase an area of the map. MASS MoCA calls his work “hand-wrought Minecraft on a truly massive scale.”

Gretzinger’s genius lies not only as a world-maker (with tireless determination to push himself and his vision past the edges of each tile he creates) but also in the rigorous way he keeps the pages archived and cataloged, adding new material all the while. “As the number of tiles continued to increase, it became near chaos trying to find one or another when I wanted it,” he said. “So in 2003 I decided to reformat everything.” Now, Gretzinger has each panel scanned, coded and ordered in piles (and piles) of neat files in his workspace, and he can easily navigate around inside of them.

The scope of such a project is surely intimidating, if not impossible, to sustain, and to see this project in its immensity begs the question: how does one continue be enthusiastic about returning to the same tiles, on the same table, in the same room, morning after morning, year after year, and still feel invigorated to begin anew? Isn’t there an inevitable coda to every enterprise, even when one’s muse is an invented world? Gretzinger’s answer to the question of an end-point to his map is a vehement “no.”

He does not see a conclusion to the project and imagines continuing to work on it at his new home in northern Michigan (a farm near Grand Rapids to which Gretzinger and his wife will move in mid-November). “There was even a discussion on Reddit about how someone who liked the project was wondering and hoping that I had an apprentice,” he chuckled, “you know, so that the map can go on forever.” 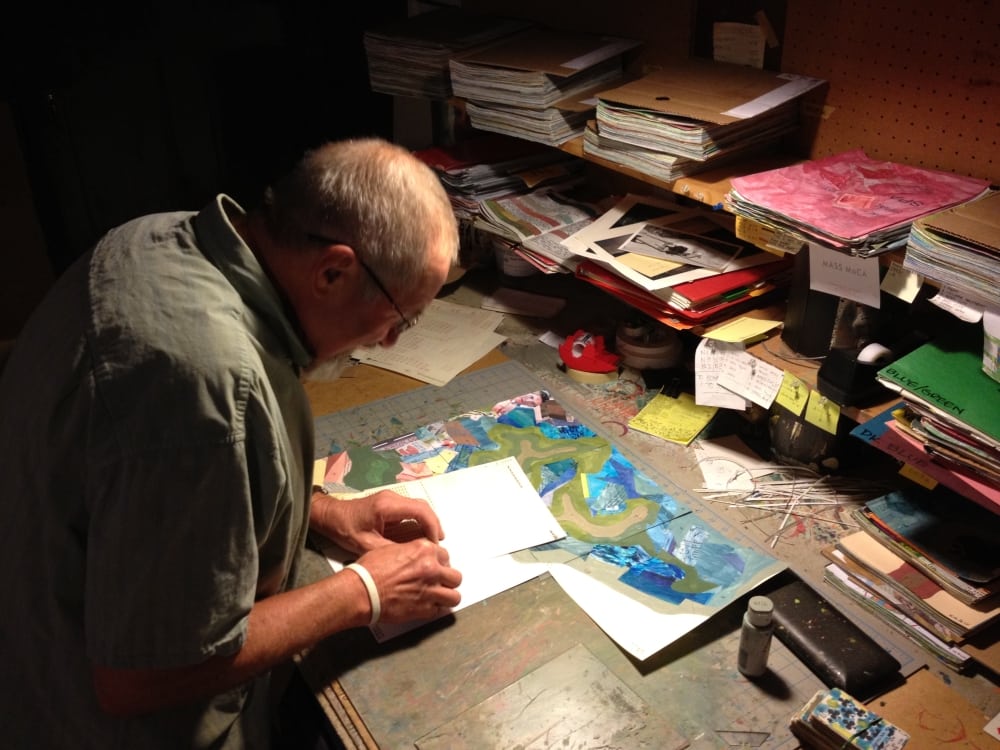 Gretzinger at work in his Cold Spring studio. Photo by C. Simek

The evolution of both Gretzinger’s life and his map — a story that began in a loft in SoHo and moved to an attic in Cold Spring, that shifted from limited showings in tiny exhibition rooms to a very public presentation in a major art gallery — seems an inescapably melded venture. Just as the people and places one encounters over moments and years amalgamate to make a life, the edges of each panel of Jerry’s Map extend through the blank space between them and create the form that is its very wonder. “I’ve had just these — to me — astounding coincidences in my life, and you know,” he laughs again, “by looking at the video, that I am agnostic … but I say, ‘I don’t know what’s going on, but there’s … something.’

“I think of it as these filaments,” he continues, “these fine, little invisible threads that connect us … and then all of a sudden — BLAT! There we are.” Yes. There we are, in some way embodied in the edges of each meticulously maintained tile that, once laid out side by side, form a cohesive whole.

The exhibition at MASS MoCA will include Jerry’s Map in its entirety. At one side of the room, Gretzinger will also set up and work in his studio so that visitors will have a chance to see his process in action, and a film crew will also be lurking about to capture footage for Whitmore’s latest documentary film.

See the video below about Jerry’s Map or read Gretzinger’s blog.