As with its namesake, The Nest started small, beginning informally in owner Sandy Timmons’s home. There it was carefully tended to, built up, and finally grew into its permanent home, in the heart of Cold Spring Village along Chestnut Street. 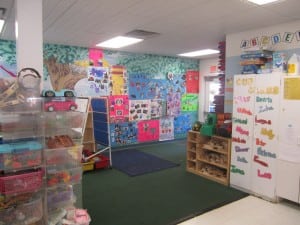 A bright corner of a room at The Nest. Photo by A. Rooney

Years ago, when Timmons was home with her own young children, there were no full day care providers in Philipstown. After essentially babysitting some small children in her home, she made it more official, obtaining a license to become a group, family day care provider, still operating out of her home.

As her children moved on into high school, Timmons turned her thoughts and energies to the future and pondered what direction she should go in. Taking note of the large property for sale in Cold Spring, she and her husband decided to take the plunge and formally open a business. That was in 1998, and The Nest has been going strong ever since.

“We opened up more rooms as enrollment grew,” said Timmons, “one wing at a time.” Always conceived as a day care center and not a nursery school, The Nest is open weekdays from 7 a.m. to 7 p.m. throughout the year except for major holidays. The rare closings are generally caused by icy conditions. As most families live “in town,” they are usually able to get to The Nest in inclement weather and therefore The Nest is open for them.

In earlier years The Nest offered a mini-program with nursery school hours, but the demand for full-day care has been such that this program has been eliminated. This year saw the phasing out of another Nest program: after-school care for children in early elementary grades — again, they found that the space was needed for their main constituents, the babies, toddlers and pre-schoolers who attend all day. 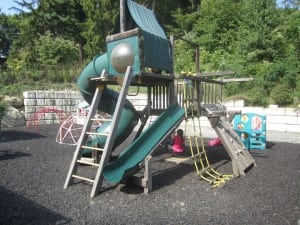 Children enjoy the outdoor play area at The Nest. Photo by A. Rooney

The facility is licensed for a capacity of 64 children and is divided into five rooms, one for infants (who can begin as early as 8 weeks old), two for toddlers, one for 3-year-olds and one for 4-year-olds. All are named after birds: chickadees, robins, hummingbirds, bluebirds and “fine feathered friends.” Each room is staffed by one full-time person, accompanied by both a morning and afternoon part-timer. Many of the staff have been there for years, including Helen Homola and Colleen Donnelly, who have been there since the opening, and whom Timmons calls her “backbones.”

As children advance in age, each room becomes more structured, and in the pre-K room there is an emphasis on kindergarten readiness, with Timmons noting that “parents are looking for this. Larissa Nordone, our pre-K teacher, now works closely with Haldane to create activities which make the children ready at the end of the year.” In addition The Nest receives feedback from kindergarten teachers, and the underlying message is that developing social skills is the most important aspect of preparation for a successful start to elementary school.

Timmons feels that the small size of The Nest affords each child individualized attention. Her goal is to “provide a safe and nurturing environment where a child feels special and happy. We want to build self esteem through play and exploration and to assure parents that their child is exactly where he or she should be when they cannot be at home.” Notes on the younger children go home to parents daily, summarizing their activities and more, and staff informally talks to parents of the older children upon pickup. On the whole, most children have working parents, many now working from home. 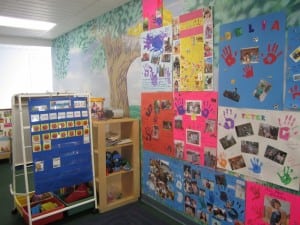 A brightly decorated corner of a room at The Nest. Photo by A. Rooney

Daily schedules vary with each age group but always include a multitude of activities, from painting to ABCs and lots of outdoor time spent in the large playground area not visible from Chestnut Street. “We’re firm believers in going outside a least a couple of times a day,” says Timmons. Each room creates their own weekly themes, with tie-in activities. The Nest serves morning and afternoon snacks and a cooked lunch daily. The potty-training motto is, according to Timmons, “When parents are ready to work with us, we’ll work with them. We try our best to help each child accomplish things before moving into the 3-year-old room.”

The location in the village affords The Nest the opportunity to make mini field trips, and visits have been made to the veterinary and dental offices across the street. Proximity to the train station has also allowed them to take forays to places like the Poughkeepsie Children’s Museum, Garrison’s Landing, the Peekskill Waterfront Park, and for lunch in Beacon — all places walkable from their rail stations. They also occasionally rent buses for farther-afield day trips, for example apple picking in September. There are no computers at The Nest. There used to be a few, but Timmons found them to be a “real distraction, so we got rid of them — there are so many other things for them to do.”

As for the challenges in running her business, Timmons says the largest is probably staffing, at times. When she hires people with degrees, their goal is often a position in a public school and they sometimes move on. But that is balanced out by the majority of her staff, whom she calls “so supportive — our staff is such a big thing here; we brainstorm and work so well together.”

As happens in the life cycle of nests, Timmons is now giving care to some of the children of those very first children she once cared for within her home, way back when. Children can come from two to five full days (there are no separate rates for half-days). The middle of the week usually fills up first. Right now there is a waiting list for the “2s” and the toddler room. For more information or to set up an appointment to tour the facility, call Sandy Timmons at 845-265-5091.

This article is part of a series on each of Philipstown’s preschool providers.