With a story that starts on such a Dickensian note, the listener is braced for a subsequent tale that involves Putnam County’s most fragile individuals being stuck in a desperate downward spiral of addiction and mental illness with no access to services.

But suddenly, the story takes a welcome turn for the better. “The staff here formed a 501(c)3,” said Russo, as a way of explaining an internal decision by department staff to keep the agency alive by converting it to a privately operated, not-for-profit, tax-exempt organization. “On July 1, 1997, Putnam Family and Community Services was born,” she said. 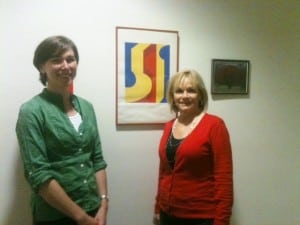 Russo, who is now the executive director of Putnam Family and Community Services (PFCS), has been telling that story with more frequency lately, since this year marks the agency’s 15th birthday. That milestone has been incorporated into the theme of their annual dinner dance benefit: Celebrating 15 Years of Hope & Recovery.

That event, to be held on Friday, Nov. 9, will not only be an opportunity to celebrate PFCS’s birthday, but more importantly, it will provide a chance to make a significant stride toward their fundraising goals. Additionally, since the event is being held at The Garrison, right here in Philipstown, the Carmel-based agency will have an opportunity to introduce itself to the western end of the county, where it has had a somewhat muted profile.

Serving a client base that numbers more than 7,000, PFCS offers a wide range of mental health services as well as chemical dependency counseling. And even with the relative affluence in Putnam County, the recent economic downturn has had a measurable effect on demand. “We’re seeing more people that are suffering job loss and depression,” said Russo. “There’s a lot more drinking and drugs, families in crisis.” It’s a dilemma for PFCS, since their fees are based on a sliding scale, which results in less revenue from clients who simply have had less income over the last several years, according to Russo.

In addition to chemical dependency and mental health services, the agency also facilitates numerous specialized offerings, like Bridges to Health, a program created by New York state that focuses on foster children with severe emotional disturbances. Working with this client population in a way that integrates their families into the treatment, the program provides developmental tools such as skill building and prevocational planning.

But that muted profile here on the western end of the county has been getting some helpful amplification recently by one of PFCS’s most vocal champions, Garrison resident Sid Gibson. Although Gibson is retired, he’s no less busy than he was during his days as a Fortune 500 CEO, with much of his time lately spent in the company of a personal trainer. “I’ve had four minor strokes,” said Gibson, explaining a physical condition which, at age 66, requires the use of a cane and has rendered his left hand essentially non-functioning. 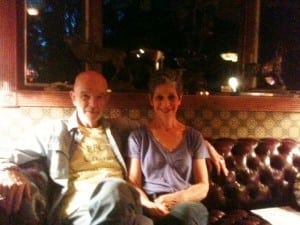 Sid and Stacey Gibson in their Garrison home. Photo by P. Smith

These medical difficulties though, were capped with the sweetest kind of revenge: Gibson defied the predictions of three neurologists who claimed that he would be confined to a wheelchair within six months. Those predictions are now 5 years old and have yet to be realized.

PFCS has become a beneficiary of the kind of energy Mr. Gibson mustered in facing his physical challenges. He attributes his devotion to the agency to two defining chapters in his own past. Earlier in his adulthood, he spent many years as a “functioning alcoholic,” followed some time later by what he describes as his “total psychotic breakdown” in 2000. It was that episode 12 years ago that revealed a chemical imbalance, necessitating a lifetime regimen of a potent drug cocktail for the purposes of managing that condition.

To the delight of PFCS Development Manager Cheryl McKeever, Gibson has applied his passion to PFCS’s fundraising needs with his typical zeal. “He’s a wonderful guy. He’s the Diamond Sponsor of our upcoming fundraiser,” she said, highlighting Gibson’s choice to offer the highest level of sponsorship for the November dinner dance benefit. Ms. McKeever went on to explain that Gibson had opted for Diamond Sponsor status expressly to serve as an example to other potential donors who might need added encouragement to donate locally. “We’re really lucky to have him on our team.” she said.

That commitment to local activism comes through loud and clear in conversation with Gibson. “Charity begins at home, and home is Putnam County,” said Gibson, in a predictably loud and emphatic voice. “PFCS is the only private nonprofit that offers these services here. Buy locally, give locally. I’ve cut out all national contributions. My money stays in Putnam County.” he said.

One other aspect of mental health very much on the mind of Diane Russo is the discomfort that surrounds the topic, both by her clients and the community at large. “There’s a stigma,” she said, while citing a recent national statistic that about 1 in 4 of the nation’s population experience some degree of mental illness in any given year. With that in mind, this year’s dinner dance benefit will feature an honoree who has been a client at PFCS, in the hope that a client’s candor and exposure will have the effect of normalizing the topic to those who might have limited exposure or knowledge of the subject.

In the same conversation, McKeever offered an analogy. “It’s like a cancer survivor. There’s nothing wrong with coming forward and championing that you are a survivor to get other people to believe that they can also survive.”

Aside from speakers and the awarding of honors, the benefit affair will offer a dinner, raffle and silent auction, as well as dancing to the music of local favorite Tony Merando and the Crossroads Band. Anyone interested in the services offered by PFCS or in information about attending the dinner dance event on Nov. 9, visit their website at pfcsinc.org.