Hard cider happenings throughout the week include, but are not limited to:

• Cider Sessions With Beer Sessions Radio at Factory on Kent on Saturday, Oct. 13

• A Cider Revival at New Amsterdam Market on Sunday, Oct. 14

These and many more events can be found at ciderweekny.com/events. New events will be added daily.

Participating locations include more than 120 restaurants, bars, shops and markets in New York City, including Gramercy Tavern, Anfora, the Breslin, Marlow & Sons, Terroir, Tertulia, and Eataly, among others. More than 60 establishments in the Hudson Valley will participate, including Blue Hill at Stone Barns, Agriturismo, Cafe le Perche, and more. The full list of participants is available at ciderweekny.com/locations. 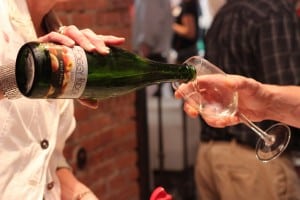 Hard cider was an American tradition until the early 20th century, when it was lost to Prohibition and urbanization. Regional cider makers across the country and in the Northeast are now spearheading the comeback of distinctive, American, orchard-based libations, crafting hard ciders that pair well with food or can be enjoyed on their own.

Glynwood’s Apple Project is promoting the production of hard cider and apple spirits as high-value products that will increase orchard viability. The project is stimulating “apple entrepreneurship” by encouraging the diversification of apple varieties, giving growers new resources for improved skills, and supporting a market for these products. For more information about Glynwood and Glynwood’s Apple Project, please visit glynwood.org and appleproject.glynwood.org.