Water-main relining reported to be on schedule

Cold Spring Police Officer-in-Charge George Kane wrote in a report presented at the Village Board meeting Tuesday (Oct. 9) that parking will be restricted on both sides of Main Street between Kemble Avenue and Church Street from 4 a.m. to 5 p.m. on Sunday, Oct. 14 for the Putnam Cycling Classic.

Since the ride will start and finish on Main Street, portions of the street will also experience intermittent closures during the race, which starts at 9:30 a.m. with cyclists estimated to leave the village by 10 and return between noon and 3 p.m. Alternate routes will be available while Main Street is closed. 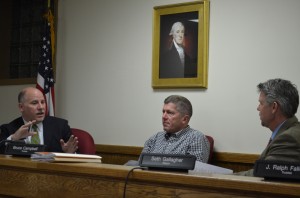 The Village Board also shared Superintendent of Water and Wastewater Greg Phillips’ report that the water main has been cleaned and lined from Fishkill Road at Route 301 to Peekskill Road. Mayor Seth Gallagher added that this means about 1/3 of the relining project is finished and that they are on schedule to complete it without having to come back at a later date.

According to the report, Mainlining Services Inc. (MSI) brought in additional workers and equipment to expedite progress on the project. Phillips wrote, “If all goes according to plan, the remainder of Fishkill Road will be cement-lined by Thursday [Oct. 11].” Over the next week, MSI planned to conduct tests on the newly lined main so that it can be back in service and the temporary service mains removed.

At the Oct. 23 Village Board workshop, the arborist from Central Hudson will be present to talk to the board and residents about their tree-trimming practices. Additional information on the Cold Spring Fire Company’s capital plan was scheduled for the Oct. 30 workshop.

The dedication of the lighting and railing improvements to the Cold Spring waterfront will take place at 6 p.m. on Oct. 19. A plaque will honor sponsors of the improvement project.

Two public hearings were held before Tuesday’s meeting. The first presented the placing of a stop sign on Mountain Avenue where it intersects Locust Ridge. The intersection is heavily used by students of Haldane School and, as Kathleen Foley mentioned in an email in support of the measure, has been dangerous for both pedestrians and drivers on Locust. Her recommendation to move back a “no parking here to corner” sign on Mountain to eliminate a blind spot for drivers on Locust will be considered by the board.

The second hearing looked at amending the code to prohibit the parking of unhitched trailers on village streets. Because the language of the proposed law was unclear on whether it prohibited all trailers or just unhitched trailers, the board will make amendments to clarify that it bans only the latter.

Trustee Matt Francisco presented to the board that he would like to inquire into ways to provide affordable basic-cable rates to seniors in Section-8 housing at Chestnut Ridge in Cold Spring, who have very limited access to local television channels with antennae. The board gave Francisco the go-ahead to speak to the cable provider.

Amid all the fighting lately, Francisco said after the meeting, “I just wanted to do something nice.”

Earlier in the meeting, after Francisco had reported from the Historic District Review Board (HDRB), Gallagher had admonished Francisco for reading their report, which commented at length about Monday night’s meeting of the two boards, instead of writing up his own liaison report. Francisco said he was not aware of this procedure but would follow it in the future.

Oct 10, 2012 at 05:13 PM Jeanne Tao
Stephanie Hawkins speaks during the public comment period of the Village Board meeting. Photo by J. Tao

Stephanie Hawkins spoke during the public comment period and asked whether the Village Board had plans to do a fiscal-impact analysis on the zoning change for the Butterfield property. After some confusion about whether Gallagher would answer her question, he stated that there were no plans to do such an analysis and that adding commercial/retail use to the property would be tax-positive.

Hawkins also commented on what she thought was Gallagher’s rather casual remarks about being able to adopt the current survey of the historic district, as is, in just a month or more. She pointed out that the HDRB disagrees with that survey and considers it a draft. Gallagher clarified that he did not mean to convey that it was a casual or quick process to adopt the survey as part of the code, which would require at least a public hearing.