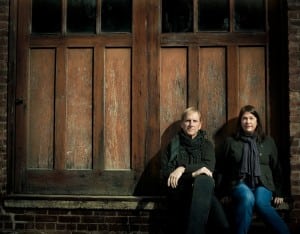 Songs, memorable, moving songs, come from a place of alchemy within the songwriter’s consciousness. Talent, craft, musicianship, and personal honestly must all combine in varying doses to create a fresh brew of lyric, melody, harmony and arrangement.

We don’t often contemplate the elements of a song while belting out a lyric in the shower or whistling a tune in the midst of a task. Yet we are drawn into a song because, beneath our surface awareness, the song has sunk into our minds and adhered to its walls. What makes a song stick so hard it can bubble unconsciously to the top?

On Saturday evening, Oct. 20 at 7:30 p.m., The Paper-sponsored series, A Song is Born, will begin an exploration of song creation from the first idea through the arduous road to actual live performance. The first performers and hosts for the series, featuring Philipstown songwriters and musicians, will be Michele Rubin and Rick Gedney, who together compose the duo Open Book. With songwriting credits, a couple of well-received CDs (and another on the way), and a strong Hudson Valley live-music following, the pair has much to offer about both their individual search for meaning through music and the process they go through to prepare an Open Book song for public reception.

A couple in all senses, Rubin (advertising director for The Paper) and Gedney pursue their shared passion professionally, all the while having to cope with music as a way of life but not always a living.

“We want to bring a more in-depth look at the songwriting process to an audience that already enjoys the kind of music we do. We think there is large audience in the area for acoustic live music,” said Rubin.

“Writing a song in the privacy of your home is a very personal thing; it’s very intimate, speaking about my own process. It’s not until I reach out to Rick to start arranging things for our performance that our collaboration begins,” said Rubin. “Some people always write together or in a song group. For me and Rick we always write independent of each other.”

“For me it’s all about the lyrics first. It’s about what I want to say that’s important,” said Gedney. He said that he takes incidents from his life or those around him and tries to reflect what he feels about these situations, particularly those that seem to repeat themselves among people. “I see it as an intensely personal act.”

“Our goal in songwriting is to distill personal ideas into something that’s universal, things that people can see themselves in,” said Rubin.

Two new songs they will play next Saturday night, “Second Chance” by Gedney and “This Is Yours Now” by Rubin, contain the sort of biographical source material they begin with but then convert to a broader palette, so listeners can consider and appreciate without personal details getting in the way. Listeners will hear these and a few other songs for the first time as Open Book puts the finishing touches on their new CD recording.

Both musicians said songs could change once they come together to consider each other’s work. While Gedney writes lyrics and then “mysteriously melody occurs,” Rubin begins with melody and chord structure and then finds the places the words come in. Gedney reads music and speaks with technical proficiency. Rubin, having played music since early childhood without formal training, approaches music instinctively, feeling her way to the needed sound. Their starkly different approaches means different ears listen to the work and then add, because they are open to it, layers of new possibility.

“Ultimately our process is very organic,” said Rubin after listening to Gedney offer a more complex major- and minor-chord-type explanation for how the pair begin to build harmony in their singing and instrument playing. Gedney balks momentarily and then they share a laugh over the difference in perspective that couples often have when they try to account to others for the way they interact with each other.

Harmony is an important component of the public presentation of a song and Rubin said they would explore this as they perform on Saturday. “To me harmony is what makes a song emote; I say that as a listener,” said Rubin. “Harmony elevates a melody to make it more fully express what you’re trying to say.”

Harmony, they emphasize, is not merely playing together in unison but rather finding singing and playing parts that complement each other to broaden and deepen the song. “If you just harmonized throughout every song people would head for the exits by the third song,” said Gedney.

They both said they work hard to develop song arrangements to achieve the result they desire. And then their performance approach is to hew closely to the arrangements for their now 40-song catalog. The discipline is “freeing for us as opposed to some other musicians who might like to change things in songs at each performance,” said Rubin.  “When a song becomes second nature, that’s when you can really relate to the audience.”

The event Saturday will also explore a new dimension to Open Book’s arranging and performances with the addition of drummer Mike LaRocco, with whom they have been recording their new CD. “The introduction of drums brings a new challenge when you add them to the harmonic mix,” said Gedney.

Both Rubin and Gedney love the idea of playing before a home crowd in an intimate space where listening to the music is the focus of the evening. “We moved here because of musician friends. The place has meant a great deal in our lives in other ways but especially in the growth of our music,” said Rubin.

The Saturday show and subsequent performances in the series will have no admission charge. Seating is limited.