The fields look a bit sparser this year at the seventh annual art exhibition at Saunders Farm. There seem to be fewer works and more space in between compared to past years. Maybe the scale of the works is smaller or the September storm took some of them down, but more room does makes for a better viewing experience. In this year’s show the sculptures presented range from the underthought to the overwrought and many good pieces in between. 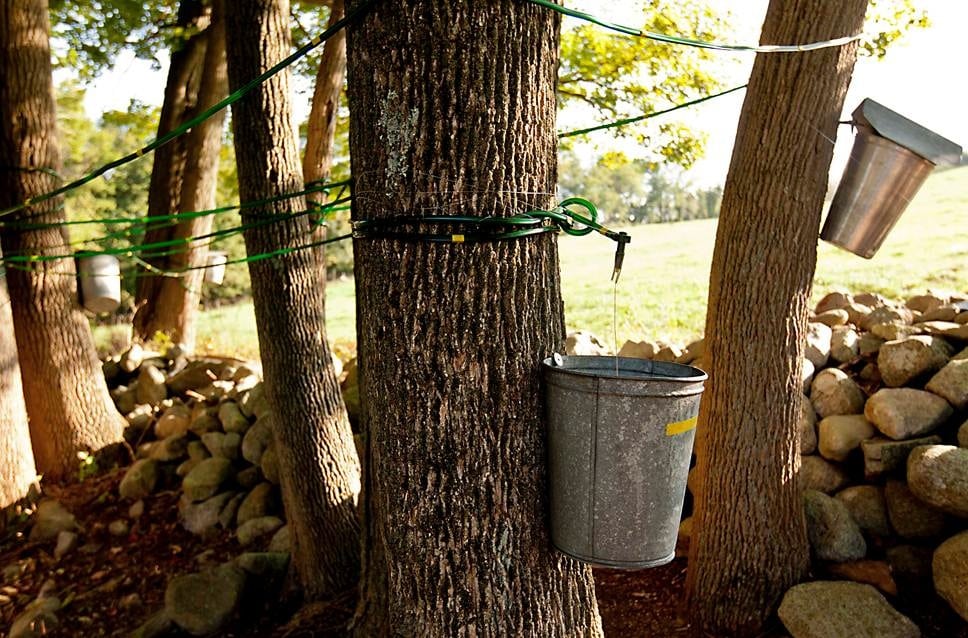 My interest is with works that are either made on site — or are site responsive — taking the working farm location into account. I have to admit being partial to works that address this rural setting with its varying terrain, steep slopes, stone walls, gates, pastures, woods and pond. A veteran artist of the Saunders exhibitions, Sheilah Rechtshaffer’s work Sugar Maple Trees and Global Warming does all of the above. Rechtshaffer did research with local scientists and tree experts regarding the dwindling supply of maple syrup.

Due to recent mild winters, the effects on maple tree sap production result in low yield. She sought out and used modern tools of the trade — plastic tubing for sap collection — as her art material. These bright green tubes wind their way across several maple trees. The small empty metal pails are a reminder of what may soon become harder to obtain. The pails are part of an old tradition, a small-scale means of collection that may be returning to use. 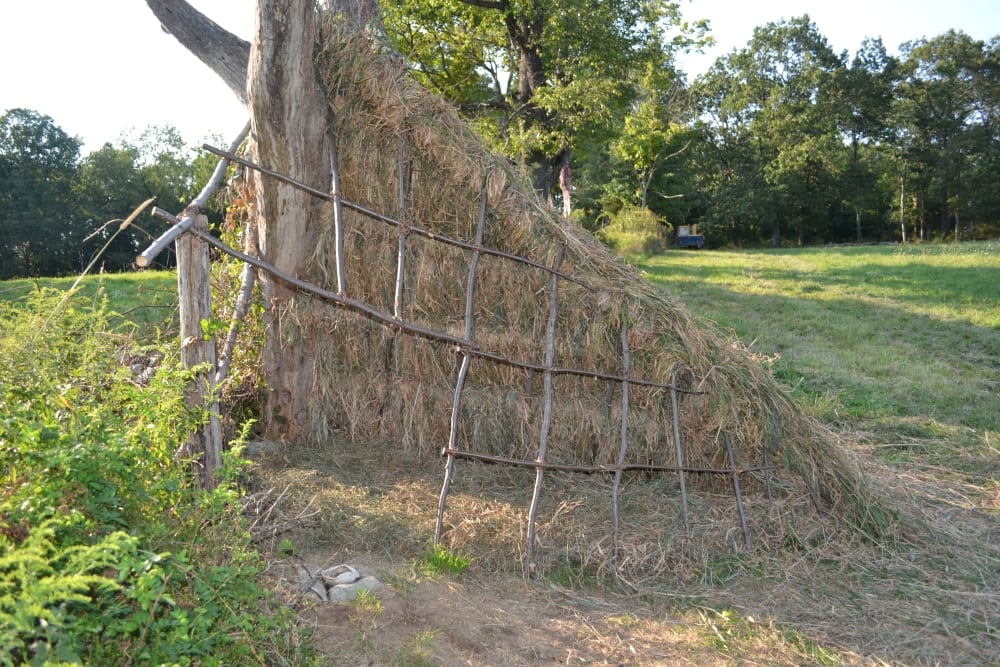 Mario Rusich, a newcomer to Saunders, used found materials on site to build a small shelter. The work is held structurally in place by an existing stone wall. Titled Shelter (ca. 2063), the use of materials such as straw, hay, sticks and stones reminds us of the distinct possibility that we may be forced to rely on local resources found in our surroundings to survive in the event of the severe consequences of climate change. Scattered along the ground around the shelter are distinctly human-looking artifacts, remnants of a fire or Native American offerings to the gods. In the face of extreme denial regarding the harm being inflicted on nature, some prayers may be in order.

Another shelter is human in scale and built of more stable materials. An untitled work by Alex Uribe is also inspired by Native Americans, but this teepee is made out of bricks. Uribe’s shelter beckons entering with a small opening and cozy interior big enough for two. The bricks are neatly stacked to create a tall conical shape and are supported by a bamboo frame that shoots out the top of the form like smoke streaming through a stack. Incongruent materials, but they work together here visually. I can’t help but think about the Three Little Pigs — wasn’t it the brick house that the wolf couldn’t huff and puff away? Hudson Valley hurricane season, anyone? 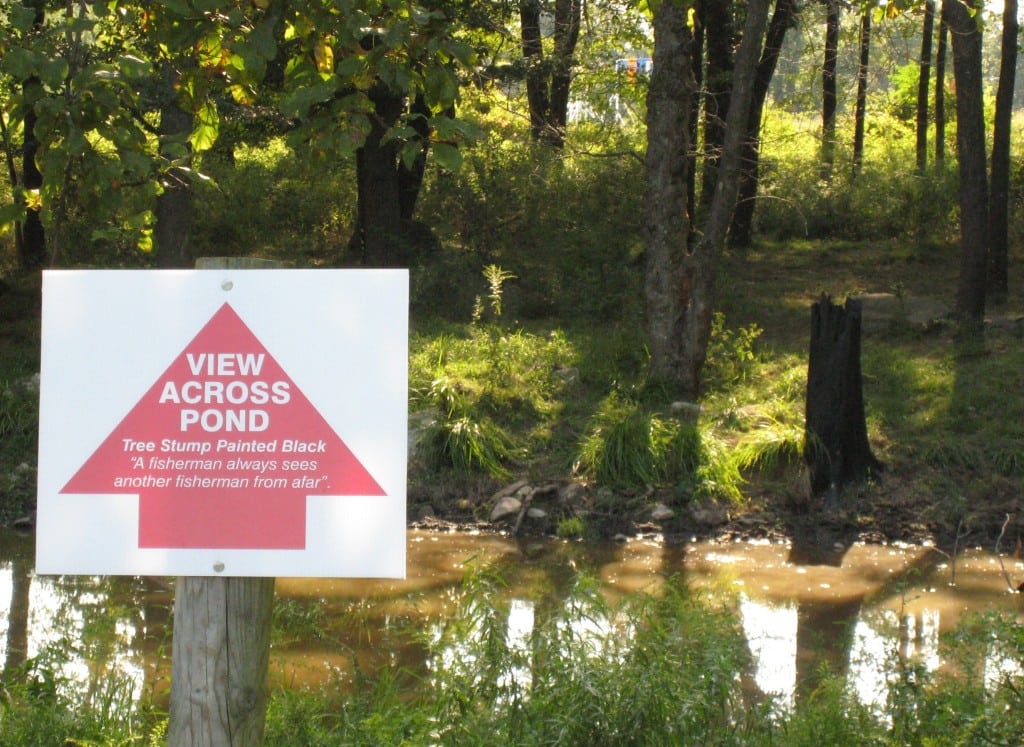 A Fisherman Always Sees Another Fisherman From Afar by Robert Brush

A Fisherman Always Sees Another Fisherman From Afar, by Robert Brush, displays a sign with the title text in an arrow directing our view across the pond. There, a tree stump painted black forces our view to what might otherwise be overlooked. The black stump raises questions, gives pause, grounds us in place momentarily. Pondering the shortened black tree stump we can also reflect while time stands still, but not for long.

Continuous Draw #6 – Capture is Ruth Hardinger’s sixth consecutive installation at Saunders Farm. Her works made of rope and concrete change subtly but distinctively from year to year. Their common focus is on using tension so that each component is connected to the whole structure. Trees at either end provide the connecting suspension. Concrete “bundles” cast from used food and milk cartons, are threaded into the work with ropes. The overall sculpture can read as a jewelry chain with Zuni fetishes — transforming the mundane of package interiors. The giant strand of dangling forms dance in the breeze and capture the beauty as well as the temporality of existence. 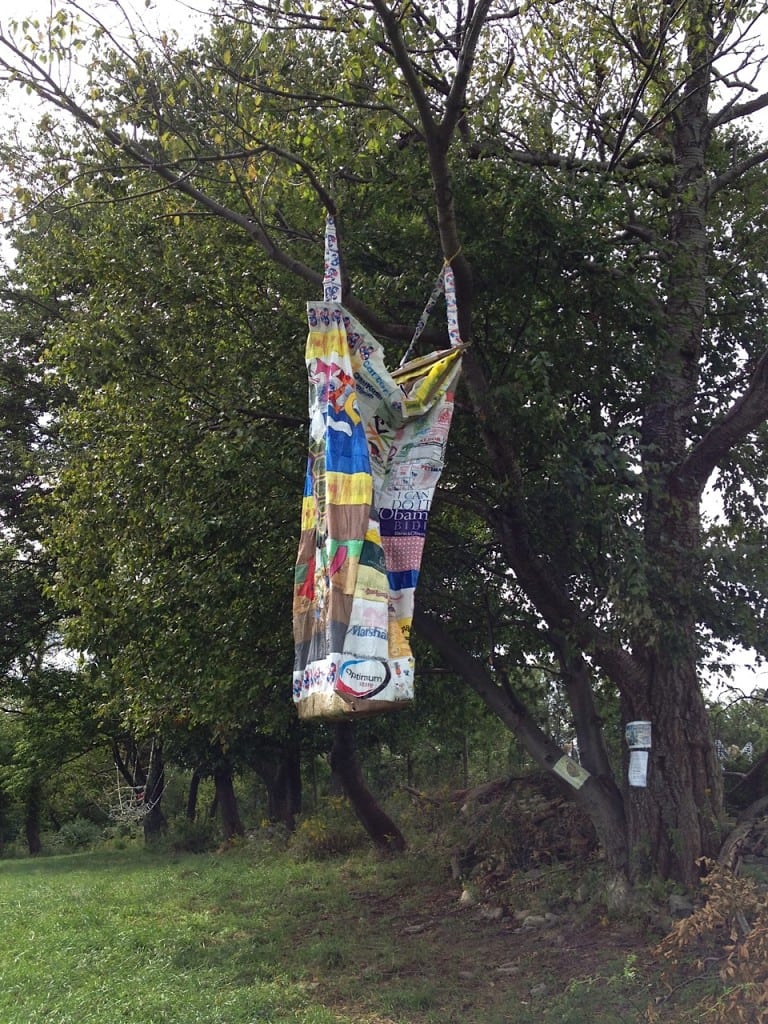 Bag the Bags but Cathy Bakker

Cathy Bakker’s Bag the Bags is an enormous, colorful patchwork bag comprised of hundreds of plastic shopping bags replete with store logos the artist has collected from a variety of sources. Suspended from a tall tree it also blows in the wind, and as in Hardinger’s empty packaging, this work is a powerful reminder of an unfortunate ever-present sight. Plastic trash bags are strewn across our cities, country roads, rural landscapes, and with most unfortunate consequences in our rivers and oceans where they afflict wildlife. Perhaps Bakker could rework her sculpture into functional limited edition pieces and sell them at reasonable prices. This artwork could then be carried to shop with (hint, hint, Cathy!) instead of the insufferable plastic bag.

Also suspended from a tree is a whimsical piece by Lea Bolotin, titled For the Birds. Comprised of three parts (of which one is shown here), the artist uses natural materials such as vines, twigs and suet combined with colorful fabric remnants to create an oversized bird feeder. In opposition to the need for scarecrows, perhaps this giant tutu will entice the birds to visit and have a snack before flying off to perform their own migration dance? 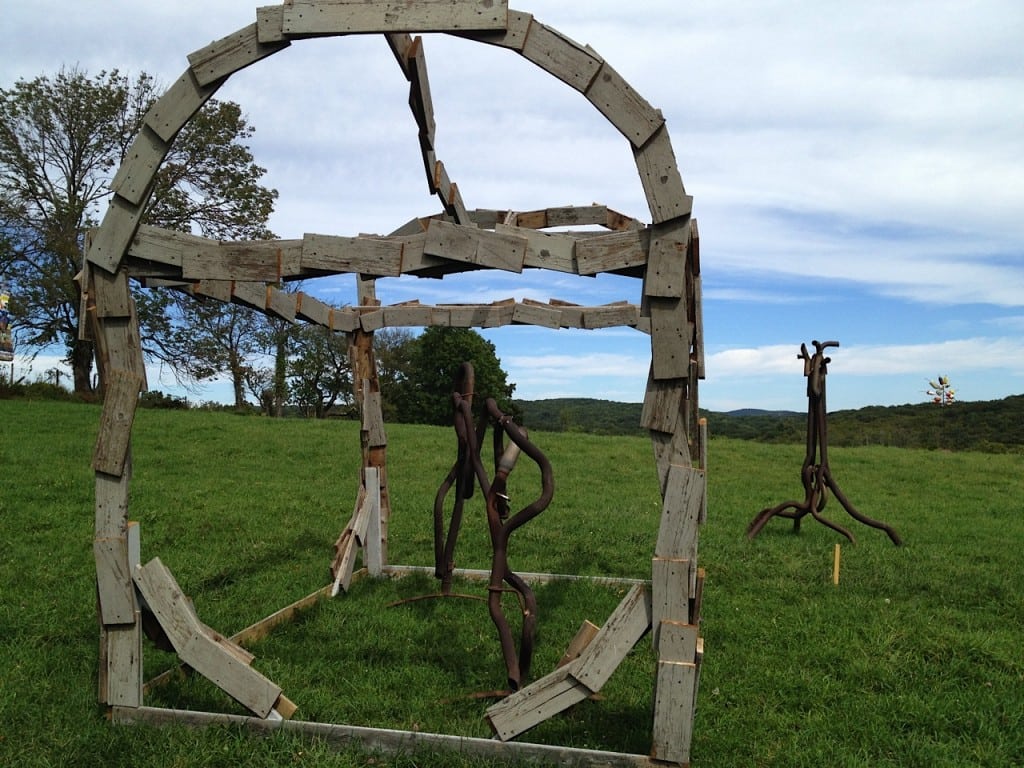 Jim Lloyd has constructed an open-frame wood barn enclosure for his symbolic cows made of metal tubing. One cow is inside and another nearby. Since his barn has no walls, the cows can graze leisurely in the pasture. No feedlot for these cows — they are only grass fed!

A prevalent theme in this year’s exhibition is art for or about animals. That should come as no surprise on a 140-acre cattle farm, but this year we can see domestic animals too. John Chirchirillo’s giant wooden cat sculpture sits menacingly surveying a large field. Field mice beware! The visibility of the cat’s internal structure does nothing to diminish its captivating realistic presence, but the inside view is left open and unfinished. It’s a bit like a theater set, but the scale is compelling. The open interior spaces would make great bookshelves too.

Marcia Spivak’s Big Red, a beautifully rendered metal horse, brings artist Deborah Butterfield to mind. Big Red has a tender touch that is absent from many of the works on view here. The cut and shaped metal components look like they had a previous life and the red color with hints of blue is striking in the monochrome green landscape. Irony is not lost on the fact that this farm had roaming horses on these fields during previous exhibitions. 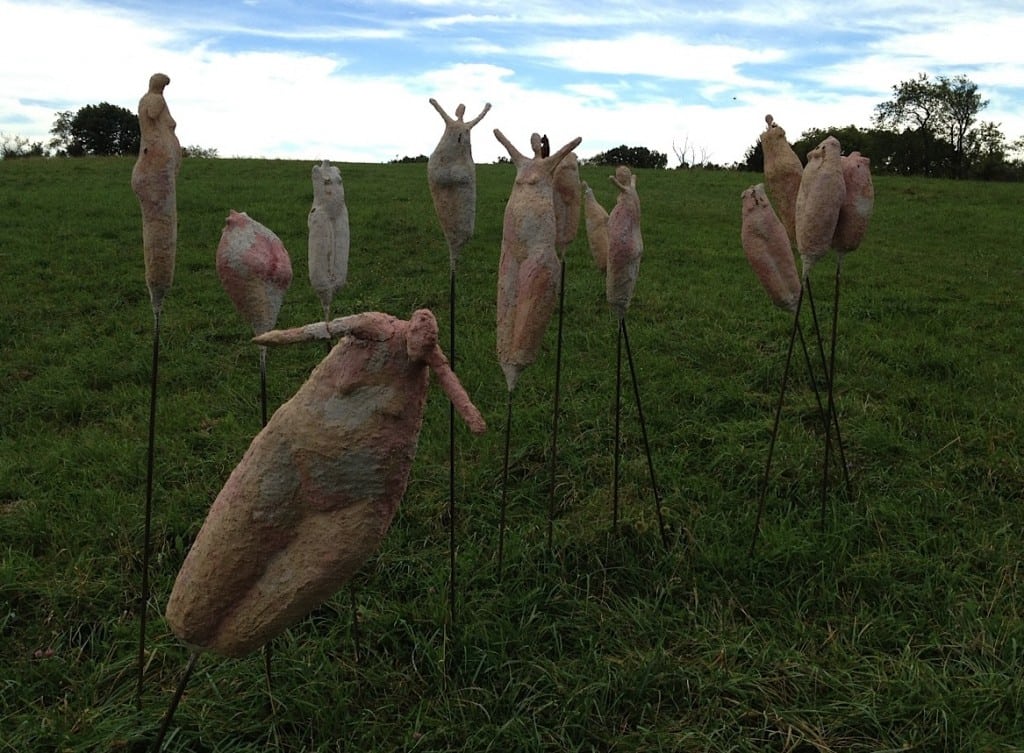 One of the more engaging installations is Jo-Ann Brody’s Fertility, Fecundity, Farm. Twelve standing figures, though not large in scale individually, dominate a large field with their exuberance. Held up by poles, Brody deals with the issue of putting sculpture in the ground without using a heavy base or suspension, which gives the work a joyful lightness. Her use of natural-colored cement lends a contemporary and archaic feel simultaneously. These ladies could have come from an archeological dig, but they also display a palpable life force in the here and now.

Beacon artist Peter Schlemowitz is a newcomer to this year’s exhibition and offers viewers another work with energy. His large-scale ZigZagZodiac has visual pizazz. One of the problems with putting sculpture in a giant field is the issue of scale — the size of the landscape easily diminishes the artwork. ZigZagZodiac is one of few here that uses scale and bright bold color for impact. The sculpture stands out in this pastoral setting with playful interlocking geometric forms that look like they could continue and be added on to indefinitely. There is a relationship here to early Frank Stella paintings, but the zigzag movement of the flat shapes brings this painting to life in three dimensions. 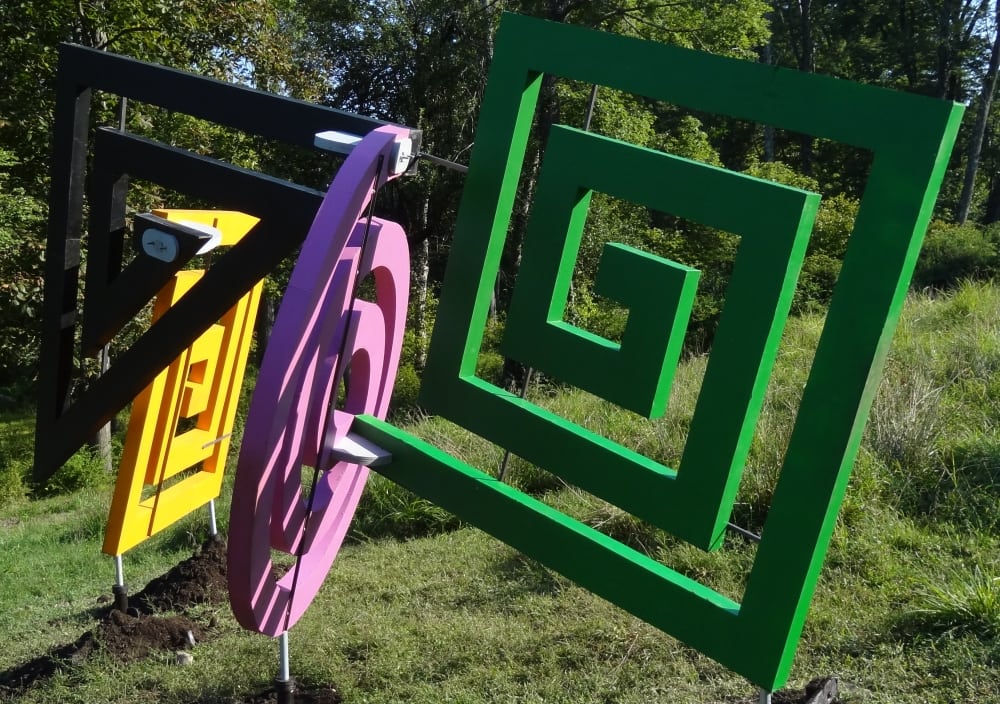 The 65 dedicated artists in this show deserve a lot of credit, as their works at the farm are mostly self-funded, self-installed and self-maintained. Given that the artists work so hard and the exhibition is becoming an institution, more funding should be sought for artist’s stipends. And signage in the way of a smart phone app or cell phone tour — or at the very least on a website that launches at the same time the show does — is a missing necessity in an exhibition of this size.

This is year 7 of The Farm Project art exhibition at the 120-acre Saunders Farm in Garrison, organized by Collaborative Concepts. The site is provided by the generosity of local farmer Sandy Saunders. The Farm Project 2012 is made possible with public funds from the New York State Council on the Arts administered by the Putnam Arts Council. The exhibition is free and can be viewed through Oct. 28. Visitors should dress appropriately for a walk in the country with sturdy shoes.

Gallery photos by Amy Lipton. Click on photo to enlarge.

A Fisherman Always Sees Another Fisherman From Afar by Robert Brush

For the Birds by Lea Bolotin

Bag the Bags but Cathy Bakker