Planning Board schedules November meeting anticipating but not promising a decision

Monday, Nov. 5, now looms as a potential decision date for the Cold Spring Planning Board’s ongoing consideration of the Elmesco application for the establishment of a Dunkin’ Donuts franchise and a convenience store at its Chestnut Street service station. 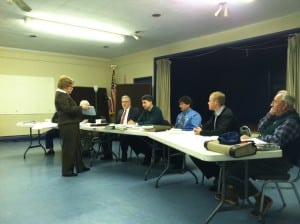 Lawyer for Elmesco presenting material before Planning Board. Photo by K.E. Foley

The tentative date for the board’s next workshop was made after Joseph Barbaro, board chair, was pressed by the Elmesco attorney Jennifer L. Van Tuyl to set a date even though the board has outstanding issues with the application. Van Tuyl argued insistently that her clients deserved a sign of good faith that the board was moving toward a decision. She reminded the board that state law required a decision 62 days after the public hearing (held on Sept. 18). Barbaro reminded her extension of that deadline is possible.

After finding a date all the board members could meet, Barbaro said the board was committed to moving its review process along as expeditiously as possible but that didn’t mean the Nov. 5 meeting (location to be determined later) would guarantee a vote. He emphasized that the board wanted to see resolution of its remaining issues before making a decision.

The outstanding matters formed the core of contention at a tense, almost two-hour workshop Tuesday, Oct. 16 at the VFW hall on Kemble Avenue.

In addressing the issues, Barbaro was joined by Stephen Gaba, the village attorney. Having the two lawyers go back and forth over various points provided a suggestion of possible litigation down the road depending on the Planning Board’s final decision. Van Tuyl at this and other meetings has certainly implied that possibility. Of course, litigation by the applicant is only one threat, with those in the community opposed to the change of use yet another.

Village governments, in particular, worry about the possibility of litigation expenses as a threat to relatively small and fragile budgets.

Although they allowed their attorney to do most of the talking, Kenny and Fran Elmes nevertheless offered full-throated criticism of the Planning Board’s process, declaring it to be unnecessarily long and overly expensive. At one point Fran Elmes claimed the board had cost the pair $125,000. A clearly embittered Kenny Elmes accused the board of deliberately throwing up new roadblocks to prolong the proceedings and discourage him from continuing with his plans.

The board’s request that an independent traffic engineer review the study done by Elmesco consultant, Tim Miller Associates, drew the most objection from the Elmes side and resulted in the most discussion. “It’s late in the day to be reviewing the traffic study,” said Van Tuyl. Citing her client’s expenses and long wait, she renewed her call for a decision on the project asserting that if new state regulations, not yet promulgated, were in place, the application would not even necessitate a traffic study. She further accused the board of “grasping at straws.”

Barbaro and other board members reiterated that they had made the traffic impact of the change-of-use application central to their concerns since the beginning of the proceedings and that they and the board’s consulting engineer, Rob Cameron of Putnam Engineering, had raised many questions about the traffic study all along.

Barbaro said the board wanted the review to satisfy them that the study was sufficiently thorough and done according to best industry practices. He pointed out that the board members did not have traffic expertise and that their consultant was not a specialist in traffic. He emphasized that they only wanted a review of the work and were not asking for new studies to be done.

Several members of the public had raised objections, at the board’s September public hearing, to different aspects of the traffic study and its conclusion that the new site use would have no negative impact on traffic conditions either on or around the site on Route 9D (Chestnut Street).

A previous offer to proceed with a conditional approval without the proposed drive-thru window with a review of the issue the following year was again introduced by Barbaro and quickly rejected by the applicant.

Offered a five-minute recess to consider the new review request, the cost of which is borne by the applicant, the Elmes team took 20 minutes and then returned with a conditional agreement. Essentially the two lawyers agreed to meet and hammer out a process that would define the limits of the review, determine eligible consultants and seek to limit the cost. At the conclusion of the meeting Barbaro told this reporter he would communicate the results of the lawyer’s confab to the media.

The other issues the board wants resolution of included greater clarity about an easement attached to the service-station property allowing egress through the rear of the property. Barbaro said that while documentation had been provided, the board was still uncertain as to the practical enforcement of the easement and how it would affect the traffic flow on the proposed new site plan.

The board also has determined that the State Environmental Quality Review (SEQR) procedure requires greater documentation from the applicant, which involves the filing of a longer environmental assessment form (EAF). The Elmes’ lawyer took sharp objection to this request, arguing that the board was misinterpreting SEQR regulations.

Gaba responded he concurred with the board’s determination and that the board had signaled the need for the longer EAF much earlier in the process. He said further that he did not believe the board intended to raise new issues and that the board would likely approve a “negative declaration” as to environmental threats. Gaba’s main concern was not to be “tripped up” by SEQR issues “down the road.” Van Tuyl declined to commit to be providing it, “We’ll take it under advisement,” she said.

While Planning Board members differed somewhat in issues or perspective on the application, there was unanimity on the review of the traffic study and affirmation that traffic has been a concern from the outset. It seems clear that a final decision will hinge almost exclusively on whether a majority of the five-member board is satisfied that the new use of the property will not negatively impact the existing traffic flow or increase safety concerns in the 9D commercial corridor including when considering the likely development of the Butterfield property and the expansion of the Foodtown supermarket.