New home for three nonprofits is an example of adaptive reuse

Reflecting the spirit of its three new tenants, the newly-restored Tudor Revival mansion now known as Winter Hill invited the community over to celebrate its official opening this past Sunday, Oct. 14. Those tenants, the Hudson Highlands Land Trust (HHLT), the Garden Conservancy (GC) and Hudson Valley Shakespeare Company (HVSF) among them share goals combining preservation with accessibility; these goals are at the core of Winter Hill itself. 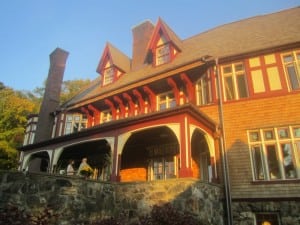 The front exterior of Winter Hill. Photo by A. Rooney

Once threatened with development, the National Register of Historic Places-listed 120-year-old property, located off of Snake Hill Road in Garrison and built for the Rev. Walter Thompson and his family, has been spared from a tear-down fate, rescued from decay, and instead renovated and restored, its new identify that of a local epicenter for local nonprofits, replete with cultural and educational programming open to the public.

Winter Hill (its new name honoring its lengthy popularity as a sledding spot, where  the sledding will continue) was the family home for the Thompsons for about 50 years. Thompson served as rector at St. Philip’s for a period before serving at the Church of St. John the Divine in New York City and the American Church in Lucerne, Switzerland, among others. He retired to Garrison, briefly returning to St. Philip’s as interim rector in 1907 and chairing the Putnam County Board of Child Welfare.

After the last of the Thompsons died in 1939, the house became a residence for the Sisters of the Good Shepherd. After that, it was used as a retirement home for Christian Brothers of the Christian Schools, and, finally, as the Nazareth Life Center, which, in its over 28 years of operation ending in 2008, provided services for unwed mothers.

Garrison’s Christopher Buck, a foundation president, philanthropist and HHLT vice chairman, was among many local conservationists who feared that the parcel of land holding the property would be bought and overdeveloped. From an initial response of hoping the property wouldn’t fall into the wrong hands, Buck summoned up a solution of adaptive reuse, purchasing the property and creating a center that, as he categorized it at the reception, “retains architectural history, saves resources, and creates unique spaces.” 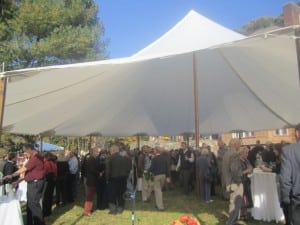 The Opening Celebration attracted hundreds over the course of the afternoon. Photo by A. Rooney

In his welcoming remarks at Sunday’s reception, Buck commended Town of Philipstown Supervisor Richard Shea for “leading us through a process allowing us to retain the atmosphere.” Buck called the Philipstown Comprehensive Plan “a part of a larger plan to move Philipstown into the future while preserving the past.”

Buck also acknowledged the contributions of the late realtor Matt Shipman, saying Shipman “knew there was an opportunity to use the property to benefit the community.” Earlier on Sunday, there was a special ceremony honoring Shipman by dedicating the “Shipman Library,” which will house a collection of books relating to nature and the Hudson Highlands region.

As people continuously streamed into the opening celebration throughout the warm October afternoon, others associated with Winter Hill spoke. Shea said he “felt lucky — good things happen because people make them happen. This resurrected, revitalized structure is an example. And a great building needs great tenants; three greats are here: a cornerstone of gardens, open space and culture. This overlap forms the foundation of this community, making it a place where people want to be — residents and visitors.”

Buck then ran down an abundant list of people, quite a few local, who contributed to Winter Hill’s successful resurrection. Noting that “in an old building like this there are plenty of surprises, changes and challenges,” Buck singled out his architect, Francisco Ramirez of BKSK architects, saying “he instilled confidence in all of us; where there were idiosyncrasies, he adapted.” Buck said his general contractor, Walter Heitmann (of Heitmann & Heitmann, Hopewell Junction), “constantly made decisions based on quality and integrity.” Buck also had kind words for his “owner’s representative,” Sam Haupt. 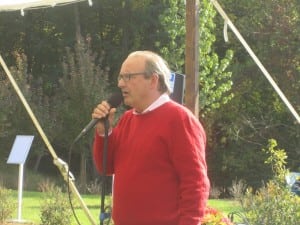 Christopher Buck making his opening remarks. Photo by A. Rooney

Praising many others, including Heitmann foreman Mark Simmons, Buck mentioned carpenters Yuri Koukhta and John Sotirdy; Andrew Pidala of Pidala Electrics; Pete Giachinta, also of Pidala Electrics (for his “smiles and smartness”); the exterior lighting of James Hartford; the stonework of John Benjamin; stained glass restoration from Ray LaRanger; Nicholas Pouder’s landscape design; the plantings of Rita Jo Riehle; media and IT installation by Pete Hayjosh; plastering from Frank Catano; plumbing and heating by Bill Hauptman; painting by Eric Heitmann; and Tino Yannitelli, “who designed and welded and installed my fire escape.”

Buck reserved special praise for his wife, designer Deborah Buck, describing how “the rest of us struggled for days on the exterior color. She knew intrinsically what the color should be. … It’s a perfect combination of modern flair and respect for the period. Thanks, Deborah — nobody does it better.”

Representatives of each of the three nonprofit tenants also spoke to the crowd, HHLT Executive Director Andy Chmar thanking “Chris and Deborah for creating this structure, taking your vision and making it so spectacular.” Chmar urged attendees to “take in the architectural detail and design elements, see the level of craftsmanship that has gone into this.” He said the HHLT “now has a home for the organization that respects the mission by being a part of that mission.” The HHLT was the first tenant of the three to move in, taking up residency this past May, as renovations were still underway.

Antonia Adezio, president of the Garden Conservancy, followed, saying: “We outgrew our space years ago. We’re homegrown but have had no opportunity for you to see us. … We’ve used this community as a launching pad for a national organization. … We look forward to welcoming more of our friends and neighbors — we’re glad to have neighbors and to be here.” The GC moved in during August. 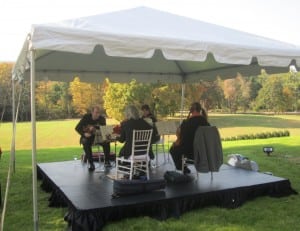 Musicians playing at the opening celebration of Winter Hill. Photo by A. Rooney

HVSF Artistic Director Terry O’Brien, speaking of Festival’s new home for its costume shop along with prop and costume storage facilities, was more anecdotal, describing interviews with potential designers in which he has told them “the costumes have to look really good. But you have to build them outside, in the mud. Now we have a costume shop, people can actually lay their work out, and 350-odd loads of laundry can be done here each week. … There will be no more dead possums found in costume containers!” O’Brien called Winter Hill “an extraordinary environment for us to fit into: one administrator, three entities, and open, shared space.”

Imagine my good fortune to be in a position to do something like this which allows these organizations to focus on their missions.” With that he urged those in attendance to enjoy the day, which most appeared to be doing for hours afterwards on the sunstruck bluestone terrace and inside.