Normally, I love paging through cookbooks. The great ones fill me with the kind of complicated, achy yearning that comes from reading about something I wish I were doing. There are certain recipes I experience with my taste buds, nose and hands the way you might go through a thriller with your adrenaline surging and heart pounding. By the time I’m halfway through a good cookbook, I’ve inevitably decided to quit my job and take to the kitchen full-time, with only the occasional break to go grocery shopping.

But last week at work, I had to peruse more than 85 of them, all recently or soon-to-be published, and the cumulative effect was as if grit had been tossed into the little mechanism in my brain where my own cooking and writing are generated. I seized up.

Not that I became completely catatonic. I organized my closet, dug holes in the garden and put things in them, matched socks, called our accountant. I avoided the kitchen, however, as if rattlesnakes had taken up residence in my pots.

But here’s the thing about food: At some point you just get hungry. And while you can certainly grab a bag of whatever from the cabinet and have at it, watching your kids survive on chips and OJ for more than a day or two makes you feel rather lame. 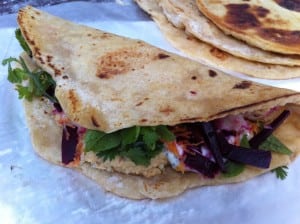 So, warily, I returned to the kitchen. There on the counter lay one of the few cookbooks from my office that had made my heart leap — and the only one to have slipped into my computer bag and followed me home. It’s called Saltie: A Cookbook, after a sandwich shop that was opened in Brooklyn a few years back by three women. There is something wonderfully accessible, democratic and fun about sandwiches — the fact that anyone with half an imagination can compose a capricious, edible collage out of familiar ingredients, and then grab hold of it with her bare hands and take a bite! Surely, this is why the Saltie cookbook had buoyed me.

Yet Saltie is no ordinary sandwich shop, and these are not simple sandwich recipes. Each ingredient is elevated to its most noble expression. For example, the recipe I decided to try first, the Clean Slate, required four different sub-recipes (it would have been five if I’d made my own sauerkraut): Naan, a warm, soft Indian flatbread; hummus; quinoa; and yogurt sauce (the book includes a recipe for DIY yogurt in case you’re feeling extra artisanal; I opted for store-bought). I also made beet pickles — which turned out to be the best beet pickles I’ve ever eaten, let alone made. In addition to the above, the Clean Slate has shredded carrots, herbs, and sesame seeds.

Okay, yup: It was amazing. We had them for dinner that night, with soup, and ate way too much. But preparing this elaborate, simple meal was not the only thing that chased the rattlesnakes from my kitchen. Earlier that day, when I’d gingerly made my way back to the stove, my son George showed up and announced that he’d developed a craving for a grilled ham and cheese sandwich and could he make one? 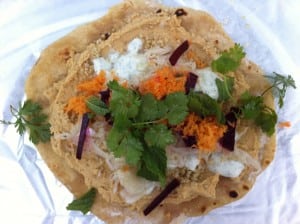 He pulled everything out — the griddle, the Dijon, the cutting board. He sliced the cheese, buttered the bread, fired up the burner beside mine. He called out to his brother and sister to see if they wanted their own. They declined. But when George sat down with his sandwich — beautiful golden on the outside, melting and compressed within — everyone had to have one, too. So he made a sandwich for Henry, a sandwich for Dosi (sans meat and pickle) and gave a nice bite to his dad.

He fed his family! And fed my soul, too. Sometimes I am so grateful for the simple, incontrovertible things — like sandwiches, deadlines, and kids with cravings — that always seem to turn up when I need them most, to snatch me out of a funk and pitch me back into the delicious flow of life.

Adapted from Saltie: A Cookbook

Combine all ingredients in a bowl. Taste, and adjust seasoning if desired. You can eat this right away, but I like the flavor better after it’s mellowed in the refrigerator (covered) for an hour or two.

Adapted from Saltie: A Cookbook

1 teaspoon salt, or to taste

Toast the seeds in a small, dry skillet over medium heat, stirring constantly, until they begin to darken slightly and release their fragrance, about 1 minute. Grind them with a spice grinder or mortar and pestle. Transfer spices to a food processor along with all the other ingredients, and blend well. Serve on warm pita or naan, topped with yogurt sauce.