After more than half a decade of often acrimonious public debate, efforts by two mayors and various trustees, and recent vandalism attempts, the Cold Spring riverfront dock’s updated lights and fence rail officially debuted Friday evening at a dedication ceremony. 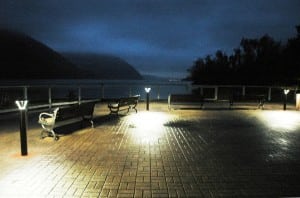 Gray skies and mists over the mountains across the Hudson River only served to demonstrate the new illumination, provided by high-tech, low-standing bollard lamps. Nor did the weather deter a gathering of about 35 adults, children, and at least one dog, as Mayor Seth Gallagher unveiled a commemorative plaque and honored those instrumental in turning the new system from a concept to reality.

The lights save on electricity — and thus taxpayer money — and diminish light pollution and glare, making the stars, river, and Hudson Highlands hills visible after dark. The fence likewise permits the river to be viewed at night without hindrance and, unlike the previous railing, derived from old police barricades, meets current safety codes. During installation in September, someone apparently vandalized the fence with wire-cutters, leaving small gaps needing repairs, but the installation continued.

The mayor tied the improvements to earlier dock upgrades but also specifically saluted Andrew Chmar, executive director of the Hudson Highlands Land Trust, who raised more than $119,000 for the project. Much of the financing came from individuals, companies, and institutions, although the Village of Cold Spring contributed money and the time and talents of its leaders and employees, starting with former Mayor Anthony Phillips in January 2007. 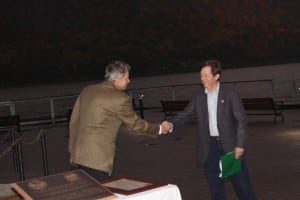 “It’s taken us about five years, and we wouldn’t be here without Andy Chmar,” Gallagher said. Despite obstacles and delays, “he didn’t give up. He just said, ‘Let’s do it.’ And it’s done.” At one point, strident opposition by some village residents threatened to torpedo the project. As a compromise in December 2010, the Village Board voted to vary bollards with taller “shepherd’s crook” lights similar to the streetlight-style lamp posts then utilized at the site. Once the bollards proved themselves, the board revisited the issue and went with an all-bollard approach for the dock, which projects on three sides into the water from the shore.

“It’s a great outcome, as we see right now,” Chmar said, with the lights shining through the gloom. Like Gallagher, he noted that the project built on previous initiatives, such as a dock renovation by village officials and residents in the early 1990s. “They deserve acknowledgement for what they did,” Chmar said. He also referred to the project as “a public-private partnership,” which included $10,000 in village funds. “That’s the taxpayers saying” they considered the project important and “wanted it done,” he said.

The periodic setbacks and frustrations notwithstanding, “this is one of the easiest things I’ve ever raised money for,” Chmar said, expressing gratitude to members of the gathering “for your financial support and your moral support.” In two examples he mentioned James Hartford, of Cold Spring-based River Architects, who designed the project and donated pro bono work on the railing, and Andrew Pidala, of Pidala Electric, who provided numerous hours of free service for the lighting. “It was a labor of love for him,” Chmar said of Pidala.

Hartford noted that the new, railing-topped mesh fence resembles the one on the deck of the Mary Powell, a historic Hudson riverboat ferry. “We were glad to kind of harken back to that,” Hartford said.

Along with re-opening the dock to visiting passenger boats — 21st century followers of the Mary Powell — Gallagher had pushed the “dark skies” endeavor as mayor. “I’m very, very happy with the project – not at all my idea but everyone’s idea,” he said. He noted that given Cold Spring’s history, “this is probably phase 9 or 10 of this dock. It’s always been a nice place to come to.”

A resolution passed by the Village Board and signed by Gallagher on Friday explained the project and thanked all involved in it, listing more than 25 names: