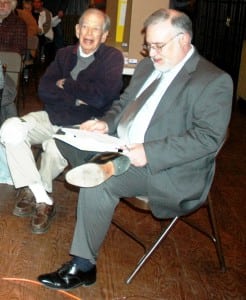 In a fractious meeting that involved audience members shouting at the mayor and two recesses to defuse the acrimony, the Cold Spring Village Board on Tuesday, Oct. 23 voted 4 to 1 to allow the village’s Historic District Review Board to consult an outside lawyer over the Butterfield redevelopment project.

It then voted 4 to 1 to begin a search for a village attorney — an open attempt to replace existing Village Attorney Stephen Gaba, whose legal opinions have riled the HDRB and drawn criticism from others at odds with either the village government or Mayor Seth Gallagher.

The mayor cast the lone “nay” vote on both measures. Trustees Bruce Campbell, Ralph Falloon, Matt Francisco, and Chuck Hustis supported both, although Campbell subsequently said he had mistakenly believed the second motion — to begin a search for the services of a village attorney — was merely an extension of the first, on permitting the HDRB to seek outside legal advice.

Lawyer for the HDRB

The board capped the fee for the HDRB lawyer “for [Village] Code interpretation” at $1,800. The mayor cautioned that amount would only pay the HDRB’s choice, Bill Hurst, a historic preservation lawyer, for about six hours of effort and not include any follow-up.

The HDRB disagrees with Gaba over how to interpret provisions in the Village Code pertaining to demolition of structures in the historic district, an issue raised by the proposed Butterfield Hospital redevelopment. Butterfield developer Paul Guillaro wants to raze the decrepit building. The HDRB has opposed demolition of the hospital’s 1941 wing and 1925 core but said it would condone destruction of the 1963 addition. The HDRB has scheduled a public hearing for Nov. 7 on Guillaro’s demolition application.

Under Gaba’s interpretation — shared by the mayor — the HDRB is overstepping its role and using  criteria designed for one purpose, designation of a historic landmark or expansion of the historic district (code section 64-6), for decision-making on applications to alter existing structures — which requires looking solely at exterior architectural features that contribute to historic character (64-7). The code defines demolition as a form of alteration.

The mayor cited three basic objections to letting the HDRB get its own attorney — the expense, his belief that Hurst had already addressed the relevant questions in a 2008 training he conducted for the HDRB on the Village Code, and reluctance to let village advisory panels like the HDRB find their own lawyers and bypass the village attorney when Gaba’s judgment contradicts theirs.

Bringing in an outside HDRB lawyer “is probably a fairly costly way to go, but I’m not sure it would serve” anything, Gallagher said. HDRB members “don’t need an attorney to make a decision.”

“It took an attorney to get us to where we are,” at an impasse, Francisco countered. If Hurst conducted a session in 2008, “clearly nothing came out of that” and “the chair of this board [HDRB] is asking us for help,” Francisco argued. “Obviously the intent here is to come to some sort of resolution as to the different interpretation of the code.” 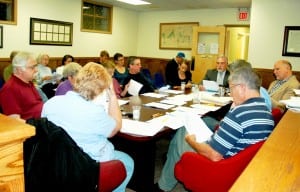 Village Attorney Steve Gaba, head of table, confers with members of the HDRB and Village Board at a recent session on Butterfield.

Gallagher replied that answers might be found in Hurst’s 2008 training presentation and supplementary materials, which the HDRB could exhaust before calling Hurst in again. “You’ve paid $7,000 already. We’ve been given the information but it hasn’t been acted upon. It wouldn’t cost us any money at all” to go through the Hurst presentation, he said. A grant funded the 2008 presentation. The mayor also stated that the HDRB could consider the views of Julian Adams, an expert with whom Gallagher disagreed and who conferred with the HDRB and Village Board on Oct. 8. Adams is community liaison coordinator with the New York State Historic Preservation Office (NYSHPO).

If HDRB members “are comfortable with the advice they got from Julian, they can move on that. They can act right now” on Butterfield, Gallagher said. “They don’t need this” outside lawyer.

“They were given legal help and they didn’t like it,” Gallagher countered. “What happens if they don’t like this one” — Hurst’s legal opinion? Moreover, “are you going to do this for the other boards, also?” He predicted that would only encourage infighting in village government. “I’d advise you to think it through and what it represents.” Besides, he said, “we have a fully qualified attorney” in Gaba.

Al Zgolinski, HDRB chairman, in the audience with the rest of his board, explained that “we are comfortable with our interpretation of what the code says. We just would like to have a legal opinion one way or another. I would think it’s in the interests of the village to get a resolution. We’re under the impression we’re interpreting it correctly. You feel we’re not.” He said the HDRB “is willing to abide by what Mr. Hurst says.”

Gallagher suggested that to save money, along with reviewing Hurst’s 2008 presentation, they instead contact lawyers with the New York Department of State and New York Conference of Mayors. “There are lawyers you don’t have to spend money on that you could get an interpretation from,” he said.

Trustee Falloon wondered “why don’t we just find a new attorney for all of us? Start fresh if that’s what we have to do.” Loud applause and cries of approval from the audience followed.

A bit later, Hustis proposed they launch a process that could replace Gaba.

Hustis’ first attempt at a motion got nowhere as audience members shouted from the floor, board members exchanged heated comments, and Gallagher called recesses — first for five minutes, then for 10 — after threatening to evict anyone who continued to be disruptive. After the second recess, a police officer entered the room, keeping watch.

Gallagher reminded his colleagues that previously they had agreed on meeting protocols. Without decorum, he said, “you don’t have a lawful government anymore; you have a mob rule.”

“A dictatorship!” an audience member yelled at the mayor.

Hustis then revived his motion “that the Village Board direct the village clerk to produce a request for proposals [RFPs] for legal services for the Village of Cold Spring.” It passed, with the mayor the only dissenter.

However, after the meeting, Campbell revealed that he had confused the two motions. “I didn’t realize it was for that,” replacement of Gaba, he said of the second vote. “That was not my intent. I’m perfectly happy with Steve Gaba.” He elaborated in an e-mail on Wednesday. “I wish there wasn’t all of the other [stuff] going on in the board room,” he said. “I feel we, Village Board, should have made time for more discussion and reasoning as to the RFP for the village attorney position.”

2 thoughts on “Village Loudly Lawyers Up”