Back in 1728, things were still a bit puritanical, on both sides of the pond, right? Young ladies were chaste, gentlemen waist-coated and be-wigged, and decorum and propriety reigned. Well no, actually, and the first musical comedy ever produced, The Beggar’s Opera, will deliver a living refute to that perception when it opens at the Depot Theatre this Friday night, beginning a three-week run there. 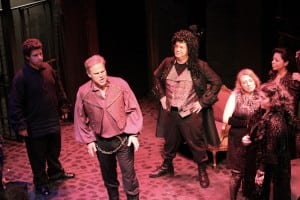 The dastardly Macheath is captured, but will he be hanged? (Photo by Maggie Benmour)

A satire of both the politics of the day and its stodgier precursors in opera, author John Gay had what Variety today would call a “boffo at the box office” hit on his hands as the show enjoyed a lengthy run, followed by a tour round the British Isles and production in one of the colonies — New York, theater-goers here showing an early appetite for things eliciting laughter in spoken word and song. The singing actors and eight-piece original instrument orchestra accompanying them at the Depot (a first for that stage) are aiming to entertain while always honoring the music, as opportunities to perform this score are very rare.

So, a brief synopsis, just enough to whet the appetite: a young girl, perhaps not as demure as her parents might think, has run off and jumped into marriage with a highwayman of dubious moral virtue, Captain Macheath. That she has done so is perhaps not so surprising, considering her lineage: her father’s a powerful tough-guy fence and her mum a greedy schemer. Outraged over the marriage, the parents plot to nab Macheath and have him hanged.

After a last liaison with his young bride, Macheath escapes but is captured and thrown into a jail run by a jailer whose palm is moist from greasing. What the jailer doesn’t know is that his own daughter has given up her heart and more to Macheath as well. Rumor has it that a catfight between the young ladies ensues — and rather a nasty, soprano-vs.-soprano one at that. The last portion of the play does manage to get in some commentary on such ever-present evils as poverty and the abuse of power. 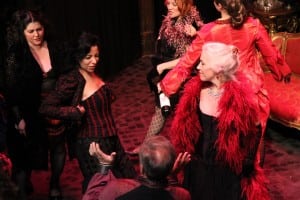 Julie Heckert, right, and ‘women of the town’ in a scene from the production (Photo by Maggie Benmour)

If the plot sounds familiar, it may be recognizable from Threepenny Opera, which took Gay’s story, updated it to Victorian London, and set it to words and music by Bertolt Brecht and Kurt Weill. The music of The Beggar’s Opera is decidedly different, and thus the production itself has its own unique flavor. A “ballad opera,” Gay’s music is taken from folk melodies and popular songs of that time, and is melodic and pastoral. The eight musicians playing the music are all noted in the early music field, and their collective resumé includes regular performances with the New York City Opera, Juilliard and other venues of that caliber.

Nathan Smith, Nate for short, is making his Depot debut, portraying the devilish, charismatic ne’er-do-well Macheath. Smith calls himself a “true amateur,” but he’s an amateur with a very musical pedigree. Now a businessman, he started off hoping for a career in music, and in fact earned an M.A. in the field at the University of Missouri, performing there with Kansas City Fine Arts and the Kansas City Symphony Orchestra. “I seriously considered making a go of it, but came to the realization that I was meant to end up in a ‘traditional’ life rather than jumping in trying it for 15 years.”

Having recently moved to Garrison, after seeking out a place with a small-town feeling in which to raise his children, he and his wife Angela have settled in and assumed community leadership roles already, Nate as the head of Philipstown Recreation Soccer and Angela as the president of the Garrison School PTA. He first became acquainted with the Depot Theatre through his daughter’s participation in Youth Theatre productions there and pronounces it “adorable, with a nice, tight-knit group of people and an intimate setting, so that when you watch a show you’re right in the stage — you’re lifted up above the stage.” 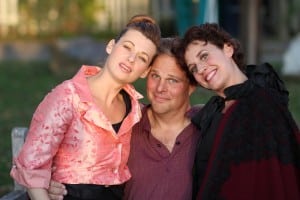 Smith saw the casting call notice seeking baritones for The Beggar’s Opera on Philipstown.info and, having “wanted to get back into theater forever,” he went in — and walked out with the lead. Though this is his “first time back since my 20s,” as he attended a conservatory he has had prior experience singing with accompanying musicians, often the school’s symphony orchestra, in operas including Falstaff and Marriage of Figaro.

But rehearsals for The Beggar’s Opera have taken place with a keyboard only, up until a few nights before opening. Notes were taken on the actors’ pauses, tempos, entrance lines, etc. and brought to the musician’s rehearsals. “A lot of times singers feel they have to express themselves outside the bounds of timing. We’re being reined in, so that things will go smoothly. … Hopefully both we and the orchestra are working ‘in mind’ with each other,” Smith said.

Smith noted his appreciation for the contextual quality of the rehearsals provided by the director (also musical director), Gordon Stewart: “We’re not just learning pieces of text, but also what was happening at the time: what that character’s life might have been; the political landscape; the reality of their station; aristocracy versus common man.”

The Beggar’s Opera will be performed from Oct. 26 through Nov. 11, Fridays at 7 p.m.; Saturdays at 2 and 7 p.m.; and Sundays at 4 p.m. This Saturday, Oct. 27, there will be an Opening Night Benefit Party in between the two performances — tickets may be purchased to either in conjunction ($75 for one performance and the benefit party).

Tickets cost $25, $20 for seniors and children (though the production has the equivalent of a “PG” rating and may not be suitable for the youngest theater-goers). There is a special price of $20 for opening weekend performances. Tickets can be purchased at brownpapertickets.com or call the box office at 845-424-3900.