Eight small children are seated on a cozy rug early on an October Tuesday morning. Maria Stein Marrison joins them and, after greetings, she holds up a card and asks them to move or gesture in the mode noted on each card: adelante, atrás, tal vez. Eagerly, the children fling themselves forward and backward and make the universal shoulders-hunched, palms-rising indication of maybe. Not a word has been spoken in English, yet this cozy rug is not located in Seville or Buenos Aires, or even in Washington Heights, but rather in the hamlet known as Garrison. 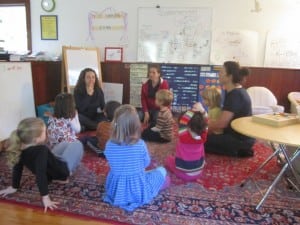 Maria Stein Marrison, left, works with the children on forming sounds found only in the Spanish language. Photo by A. Rooney

This is how days begin at the very new Manitou Learning Center (MLC), whose very purpose is to provide a bilingual learning and playing environment for preschool-aged children. Director and co-founder Maria Stein Marrison grew up in just such a setting, the flip of this one, in Panama, where her mother ran a preschool that developed into a full pre-K to 12, 1,500-student institution in which English was the introduced second language.

Emerging from that context not only fully fluent but also with the ability to think and create in English, Stein Marrison believes that with these beginnings, children can easily become not just bilingual but biliterate. With two young children of her own who understand and speak Spanish, she felt strongly that there was a need to inculcate true instructive play at those early ages when children are most receptive.

Finding that the one-session-a-week school enrichment classes she had been teaching weren’t enough, Stein Marrison rethought things. Joining forces with two other women, Hilary Hayes (of Hudson Hil’s Café), who worked in finance for many years and handles most of the business end of things, and Julisa Rincon-Tomizawa, an educator, curriculum designer, and early-intervention specialist who has helped design the curricula, they devoted several years to planning and research.

Stein Marrison made several trips back home, observing the methodologies used at her mother’s school in Panama. Putting to use her years as a management consultant for New York City firms (after graduating from her mother’s school in Panama and attending the Wharton School of Business at the University of Pennsylvania), Stein Marrison has applied analytical skills developed there to a different type of institution. 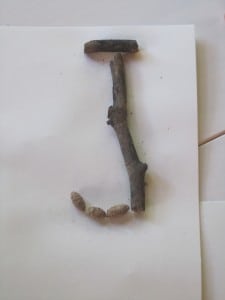 The letter J compiled by a child from natural objects found in the nearby woods: a child’s handiwork. Photo by A. Rooney

MLC opened its doors in September, and Stein Marrison has already seen the results she was hoping for. “It’s amazing — we’ve only been in school for two months, yet the children understand so much and are starting phrases now; they are following directions in Spanish and their vocabulary is growing by leaps and bounds.” Assisted by two certified teachers, Esther Espinosa, from Mexico, and and Jackie Wlodarczak — whose Spanish is improving along with the children’s — the program is designed as a bridge to kindergarten and as such runs in the fall from 8:45 a.m. to 1:45 p.m., with the day lengthening by an hour in January.

An extended-day option, available throughout the school year, runs until 3 p.m. The school days segue from a mix of English and Spanish first-thing, to all-Spanish later on.

Music is a foundation of the program. Stein Marrison had her guitar on hand while she and the children sang a song in Spanish about the caterpillar/butterfly cycle, and music is used for transitions, cueing shifts during the day. The centerpiece of the daily program is “Imagiplay,” a pedagogy that considers self-regulation the most important thing for children of this age, best obtained through sustained, mature dramatic play. Different, familiar settings are presented to the children, rotating weekly.

Recent themes have been the restaurant, post office, family and supermercado. Children are first read a story, in both English and Spanish, about the locale. They then choose a unique role, be it cashier, shopper, delivery person, etc., and must alternate roles daily. After choosing, they make a “play plan” by drawing it themselves and committing to it. They themselves then transform the room into the locale and spend a full hour engaging in what might simply be called “playing supermercado” or whatever the theme is that week.

In reality, says Stein Marrison, she sees “a child who cannot sit still for 30 seconds all of a sudden sits for 15 minutes by being a character. They also regulate each other, and extend the play, too, for example showing Mamá and Papá after the shopping, in their home.” The teachers act as facilitators and also provide Spanish vocabulary to augment the imaginative play. “One boy made himself a truck,” enthused Marrison. “They made their own mailboxes; created farmers’ market stalls.” 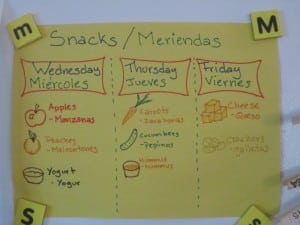 Everything is presented in dual languages. Photo by A. Rooney

After lunch (provided by parents — snack is provided by MLC), it’s outdoors time. At least half the day is spent outside, regardless of rain or snow, and outdoors time includes instructional activities. “We hike in the rain, find worms, all sorts of things,” says Stein Marrison. There is a large wooden playground structure in MLC’s expansive backyard. The children also make use of the many trails at nearby Manitoga.

In the afternoon, every day there is a different special activity. Monday is art, and teaching artists, many living locally, come in for extended periods. Tuesdays and Fridays bring experiment-based science, “asking questions, looking for solutions, very hands-on,” describes Stein Marrison. On Wednesdays Carolyn Llewellyn from Glynwood Farm visits and does a gardening/nature activity in the backyard garden; recently they’ve been composting and opening up apples, identifying seeds. Alphabet and nature combined in a recent art project in which the children scoured the woods for natural materials from which to create letters.

Storymaking and movement utilizing words, pictures and action takes place on Thursdays. In a recent edition, each child was asked to draw a picture of him/herself as some type of big cat, and then to give the cat an action. They were then invited to dance their stories to jazz — one was “a cheetah hunting an antelope and catching it.” Naturally, everything was reinforced, casually, in Spanish.

“We give them a structure within which to be creative,” says Stein Marrison.

With the majority of these children’s parents not fluent in Spanish (sheets are sent home to parents with vocabulary for them to learn, as well as words to the songs), the question begs asking, “What happens to these children’s language acquisition once they enter kindergarten?”

It is Stein Marrison’s hope that the language program at Garrison School will eventually begin in kindergarten rather than in third grade. (Haldane’s doesn’t start until middle school.) But the bilingual component to the program is only part of the reason parents are interested in the program (which is currently full for the year). It’s the emphasis on “experiential, creative learning which still has a structure, to flourish,” says Stein Marrison, who pronounces herself “so pleased with our first year. Every day I’m here I can’t believe I get to do this for a living. It’s a great group of kids.”