Garrison Union Free School Superintendent Gloria Colucci presented the results of the New York State Assessment Program for 2011-2012 at the regular meeting of the Board of Education on Wednesday, Oct. 24. The overall results from last school year’s testing in English language arts (ELA), math and science, recently released by the state, show why Garrison School is named a Reward School by the New York State Education Department. The results are, as School Board President Raymond O’Rourke said, “very impressive.” 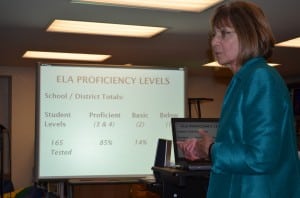 In math, the results were less consistently high, though the couple of grades whose results were lower were still in the 56th and 60th percentiles statewide. Colucci explained that the school is looking closely at both cohorts’ results to determine why they performed lower than in previous years; one factor may have to do with the fact that students with special needs are still required to take the tests.

The science assessment was administered to grades 4 and 8, with a high majority of the students scoring a 4, which means they exceeded proficiency standards (the highest score possible), and a few scoring 3, which means they met the proficiency standards. Colucci credited the high performance on the science assessment to the K-3 curriculum, Science 21, which provides hands-on lab experience to students. They have been using the curriculum, provided through BOCES, since at least 2000.

Garrison Middle School offers an accelerated math program, in which eighth graders may take high-school-level integrated algebra and sit for the Regents exam to gain high school credit. Though last year’s eighth grade was one of the cohorts that did not perform as expected on the state math assessment (in the 60th percentile), all 16 of the students who took the integrated algebra Regents passed it and were placed in geometry for their freshman year in high school this year. Similarly, all 24 students taking the Spanish proficiency exam passed and placed in Spanish 2 their freshman year.

Discussion ensued on why last year’s eighth grade performed lower than expected on the state math test (and not the Regents exam). Board member Jim Cannon, who has had children go through the testing, observed that every eighth grade underperforms, and that “senioritis” is most likely the cause. He said that they might have performed better on the algebra Regents because there was more motivation to obtain high school credit. Colucci concurred that there has often been a dip in eighth-grade scores. 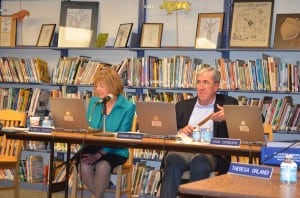 Superintendent Gloria Colucci and School Board President Raymond O’Rourke, with the gift of a ruler for School Board Recognition Week, at the Oct. 24 School Board meeting (Photo by J. Tao)

A parent in attendance, David Gelber, asked the board whether the state tests fall short and where they fall short as assessments of students’ academic performance. Colucci answered that they are one tool that the school can use to inform instruction, because analysis of the results can show in which standards a student or cohort is strong or weak, pointing to areas where teachers can provide more teaching and practice.

But, she said, the state tests are “not sufficiently validated to make a determination about a student,” that they are mostly multiple-choice questions with a few more written responses than on previous tests, and that they do not give a full picture of a student.

The test results do, however, define schools at the state level (identifying them as Reward Schools — high-performing — or Focus Schools — low-performing, which have to use much of their resources on costly corrective actions) and, starting from this year, will be used as 25 percent of a teacher’s evaluation. This is why such standardized tests are called “high-stakes testing.”

Information on the assessments as well as results and rankings can be seen on various websites: nysed.gov, engageny.org, reportcards.nysed.gov, schoolmeter.com, and schooldigger.com. Board member Anita Prentice also pointed out the website fairtest.org as one that is an informative resource on testing.

In other business of the meeting, Colucci mentioned that some of the board members would attend the 35th Annual Joint Superintendents and Board Dinner given by the Westchester-Putnam School Boards Association on Nov. 8 in Tarrytown, at which a speaker from FairTest will address How Standardized Testing Damages Education and What We Can Do About It.

She also presented a proclamation from the state, signed by Gov. Andrew Cuomo, thanking all who work on school boards, as part of School Board Recognition Week next week.

Board members, in turn, expressed their gratitude for the hard work of the PTA and the Garrison Children’s Education Fund to bring great programs and events like last weekend’s Fall Festival and this week’s book fair and reading enrichment programs to the school.

Board member Theresa Orlandi also thanked the couple of parents in the audience for attending the meeting and urged parents and teachers to come to the second of three Board Goals workshops, which was originally scheduled for Tuesday, Oct. 30 but has been rescheduled for 7:30 p.m. on Monday, Nov. 5. The third workshop will take place on Wednesday, Nov. 7.