Docks at the Garrison Yacht Club were no match for the storm’s power. Photo by M. Turton

The tanks ruptured, sending fuel into the Hudson River at Garrison Landing and Manitou, and propane tanks also broke at a couple of properties, he said. At least eight homes were known to have suffered flooding or other water damage at Manitou or Garrison Landing, he said.

Shea said that one of the fuel spills had sent “600 gallons of oil going by” on the Hudson River. And because of the spills, one home was flooded not only by water but fuel, he added.

At least two Town Board members, Shea and Councilor Nancy Montgomery, were among Philipstown residents without electricity as of 9 p.m. Tuesday. Shea said that about 1,900 Philipstown homes lacked power, mostly south of Route 301, although he and Montgomery live in North Highlands, in the town’s northern fringe.

Crews work to restore power in the area of Travis Corners Road and Old Albany Post Road. One worker said, “This is bad. It seems there’s a tree down at every other house.” Photo by M. Turton

On Tuesday, crews contracted by Central Hudson worked to repair damaged power lines on Route 9D near Manitoga, a scene that was repeated in several other areas around Philipstown. The area at Travis Corners Road and Old Albany Post Road was without power due to downed trees.

One utility worker there said, “It’s bad. There are a lot of trees down. It seems there’s a tree down at about every other house.” On South Mountain Pass, partially fallen trees sat precariously above power lines in more than one location, and just east of the town border a huge tree had fallen across the road making it impassable.

In the Manitou area, on the Hudson River south of Garrison, several homes flooded. Members of Garrison Volunteer Fire Company used boats to carry out a rescue there at about 1:30 in the morning on Tuesday. GVFC Chief Bill Rimm said that when they answered the call for help, they found a couple and their infant trapped on the second floor of their house and that the smell of fuel oil was evident in the dwelling.

He praised the coordinated effort that rescued the couple, which also included Putnam County sheriff’s deputies, the Garrison Volunteer Ambulance Corps, and a Peekskill ambulance service that also responded. The family was taken to hospital to be examined. An elderly couple was also rescued from Manitou and taken to the Philipstown Recreation Center.

Montgomery said that Manitou residents had first been advised and then ordered to evacuate their houses, which stand on a narrow spit of land along the Hudson River west of the Metro-North railroad tracks on the southern end of Philipstown. Some refused to leave at all, others waited until too late, and as a result the Putnam County Sheriff’s Department had to rescue nine residents there overnight, she said.

Rimm said that in checking other houses there, firefighters found a home that had liquid propane leaking into it and another that had oil leaking into it. GVCF returned to the scene later in the morning to ensure the houses were properly vented and again later in the day to pump out the basement of a badly flooded home.

Shea cited complaints that the town should do more to help Manitou, such as by installing a culvert in a troublesome area. Yet when the Hudson River rises, a culvert “is not going to stop the flooding down there,” he said.

Garrison’s Landing was also hit hard. A number of homes there flooded, and crews were on hand Tuesday to clean up an oil spill from a 275-gallon tank that high waters had overturned at one of the residences. The Garrison Art Center also flooded. GAC Executive Director Carinda Swann said that the center’s basement flooded to a depth of more than 3 feet, damaging equipment, supplies and materials. No art was damaged. Docks at the nearby Garrison Yacht Club also sustained damage.

Philipstown Highway Superintendent Roger Chirico, who joined the Town Board members to go over 2013 budget figures Tuesday night, reported that he and others had worked until about 1 a.m. Tuesday, in the height of the storm. “There was harmony. Everybody worked together,” he said of the Town Board members, Highway Department crews, responders, and others.

The hurricane uprooted trees all over town, branches fell, and so did some wires, he said. He observed that in places Tuesday, drivers ignored warning signs or barriers and drove down roads “with hot wires in the road.” But by Tuesday evening, he added, “just about every road was passable” – not necessarily in optimal shape, but at least not closed. 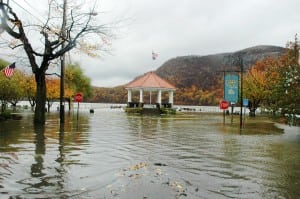 In Cold Spring, Mayor Seth Gallagher said Tuesday afternoon that about 25 homes or businesses suffered flood damage in the lower part of the village, near the Hudson.

The Vikasa Yoga and Pilates Studio on lower Main reportedly sustained damage, with some three feet of water inside, and Moo Moo’s Creamery ice cream shop on West Street closed until further notice.

High tides overnight Monday-to-Tuesday and again around 12:30 p.m. Tuesday sent river water rising on West and Main Streets, making the village bandstand look like an island, and flooding parts of Dockside Park. The lower Main Street area and Dockside were reclaimed from the river and filled in to use as building sites around 1830.

The village’s West Street pump station, which routes wastewater toward the sewage treatment plant, was inundated, the mayor said. That means “the sewage is going into the river, storm-water mixed with raw sewage,” and the situation will continue until the pump station can be repaired, he said. Without the pump station, wastewater “backs up in the manholes and leaks out”; to clear the system the dirty water must be pumped into the river, he explained.

The village government has been working on an upgrade for the station, to prevent such hazards in the future. Because of the unsavory blend of run-off and sewage, “people really should stay out of the water” flooding the riverfront at high tides, Gallagher said.

An alert sent out by the village office shortly afterward underscored the message and warned of the potential for danger from downed electrical wires as well: “The village is asking residents to avoid walking in the accumulated water on lower Main Street, West Street and New Street,” the note stated. “This water has a probability of raw sewerage contamination along with a possibility of electric shock.”

According to the mayor, getting the pump station functioning again requires drying out its components and making other basic repairs. He expressed hope that everything would be back in operation by the end of the week. Not only were the underground parts of the pump station flooded, but the above-ground outdoor control panel “was completely submerged,” Gallagher added. “The water was about 6 feet high.”

Stephen Geiger and Sarah Tauber lost most of their possessions in the flood. They live at 1 North St. in Cold Spring. Photo by M. Turton

Stephen Geiger and Sarah Tauber live in the distinctive “Quonset hut” style house at 1 North Ave. in Cold Spring next to Dockside Park. “We had 42 inches of water in the house,” Geiger said. They lost most of their possessions in the flood, including furniture they had purchased after Hurricane Irene.

Geiger said among items lost were their bed, bedding, rugs, microwave, washer and dryer. “Our fridge fell right over; I’ve never seen anything like that. The jury is still out on the stove.” Geiger said that during the flood their propane tank floated away, and their oil tank began leaking. “We love living there, but I’m afraid those days have come to an end,” Geiger said. For the time being he and Tauber are staying with friends in Cortlandt.

Meanwhile, the clock ticked toward another high tide – expected to occur about 1:20 a.m. on Wednesday.

There was one brighter note: the village government also noted that Halloween trick-or-treating was back on for Wednesday night. Because the storm’s impact was not as severe as feared, “the village has reassessed its recommendation against trick-or-treating, and is now recommending that those parents allowing their children to go door-to-door for candy, exercise caution in doing so,” the statement said. “It is still possible for storm-weakened branches or power lines to fall without warning. The village will do all we can to ensure safe conditions, but cannot guarantee against all risk.”

The notice also stated that Cold Spring Police Department would have its usual expanded Halloween detail on Wednesday and that “officers will be working to assure the safety of all.”

Stephen Geiger and Sarah Tauber lost most of their possessions in the flood. They live at 1 North St. in Cold Spring. Photo by M. Turton

At Garrison’s Landing, hard hit by flooding, a crew cleaned up an oil spill from a 275-gallon tank overturned by rising waters. A number of homes and the Garrison Art Center experienced flooding. Photo by M. Turton

This yacht weathered the storm just off of Garrison’s Landing and was still anchored there on Tuesday. Photo by M. Turton

Docks at the Garrison Yacht Club were no match for the storm’s power. Photo by M. Turton

At 1:30 a.m. on Tuesday, Oct. 30, members of the Garrison Volunteer Fire Company used boats to rescue five people, including an infant, from flooded homes at Manitou on the Hudson River. Chief Bill Rimm praised his firefighters, Putnam County Sheriff’s Deputies, and Garrison Volunteer Ambulance Corps for their coordinated efforts. Photo by M. Turton

Just east of the Philipstown boundary, a huge tree fell across South Mountain Pass, making it impassable, and taking down power lines with it. Photo by M. Turton

Crews work to restore power in the area of Travis Corners Road and Old Albany Post Road. One worker said, “This is bad. It seems there’s a tree down at every other house.” Photo by M. Turton

Crews contracted by Central Hudson are working to restore power in a number of areas of Philipstown, including here at the corner of Travis Corners Road and Old Albany Post Road. Photo by M. Turton

The Cold Spring bandstand, around 12:30 p.m. Tuesday;Photo by L.S. Armstrong